Home » Beauty » Beauty fans are furious that Lisa Frank is collaborating with Morphe after they helped raise over $370,000 to create ’90s-themed makeup that was never released

Beauty fans are furious that Lisa Frank is collaborating with Morphe after they helped raise over $370,000 to create ’90s-themed makeup that was never released 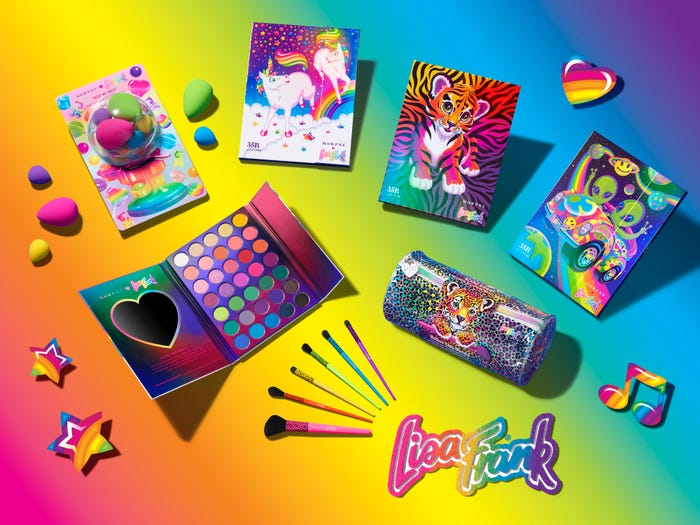 Lisa Frank has teamed up with Morphe to release a vibrant makeup collection that's reminding some people of colorful cartoons from their childhoods.

But for others, the '90s-inspired makeup line is bringing back painful memories of a failed Kickstarter campaign that left them feeling disappointed, frustrated, and out of hundreds of dollars that they donated.

The beauty company announced the collection on Monday with an Instagram photo showing some of the included products.

"🌈🌈 Morphe ❤️Lisa Frank 🌈 🌈," Morphe wrote as its caption. "Discover the magical universe of @lisafrank, the Queen of all things bold and bright! ✨👑💕🐅🦄👽"

The collection will be released online, in Morphe stores, and through the brand's retailers on November 24. It includes rainbow-colored sponges, cheetah-print brushes, and a Lisa Frank-themed version of Morphe's beloved 35B palette, which was discontinued in 2018.

The packaging for the products also features signature Lisa Frank cartoons, like the brand's tiger, aliens, unicorns, and more.

Many Lisa Frank fans are ecstatic about the collection

On Twitter, numerous people have said they're interested in purchasing the Lisa Frank x Morphe makeup because it reminds them of products they had as children. Others said they're excited to have another chance at purchasing Morphe's beloved 35B palette.

Others, however, were immediately skeptical of the collaboration

On Twitter, numerous beauty fans said the Lisa Frank x Morphe collaboration reminded them of a similar makeup line from years prior that never came to fruition.

Glamour Dolls made an online campaign in 2017 to fund a Lisa Frank makeup line. The full collection never saw the light of day, despite the New Jersey-based brand earning more than $370,000.

The original sales pitch has been removed from Kickstarter — where the brand raised $370,063 — though you can still view incentives that were offered to hopeful customers. Some of the brand's goals can also be seen on Kickfurther, a business-focused crowdfunding site where Glamour Dolls raised $313,189.10.

The highest-priced options, which previously cost $100 and $200, offered a full range of Lisa Frank-themed beauty products and accessories including an eye-shadow palette, lipstick, makeup brushes, and more. Over 5,930 people backed the project, with 1,709 people purchasing the highest tiers.

Though Glamour Dolls originally kept fans updated throughout the course of the year on Kickstarter, fans grew frustrated at the end of 2017 when the brand began selling Lisa Frank makeup through retailers like Ipsy and Hot Topic, despite having not sent rewards to its Kickstarter backers.

Glamour Dolls acknowledged this frustration in numerous updates posted on its Kickstarter page, though it went silent after September 21, 2018, when the company said it was "encountering issues" it "never imagined" when its founders "enthusiastically began this campaign."

The company finally returned on April 20, 2020, with another update, stating that Glamour Dolls has not "stopped fighting" to get backers a "resolution on this project." It also said that Lisa Frank "threatened to take legal action" against Glamour Dolls in July 2018 if the company continued to update backers about the status of its collaboration.

"To date, we have paid over $750,000 to the artist in artwork fees, royalty advances, and sales royalties (much of which was for the products you purchased and did not receive)," Glamour Dolls co-founder Peter Georgotas wrote. "It included all the money raised by this Kickstarter campaign, whatever money we had as a business, and loans that we and our families personally took out to continue paying into the license."

Representatives for Glamour Dolls and Peter Georgotas did not immediately respond to Insider's request for comment.

Numerous Kickstarter backers told Insider that they're furious with the Lisa Frank brand, and will not be supporting Morphe's new collaboration

Gina Hamilton, a 36-year-old from Virginia, told Insider she first backed the Glamour Dolls Kickstarter campaign on February 24, 2017, with $100. She even received a postcard, bronzer, and single eye shadow by November of that year. Afterward, however, "everything fell apart." She said she didn't get a refund for the remaining products she never received, and she no longer trusts Lisa Frank.

"I'm no longer a Lisa Frank fan," Hamilton told Insider. "I will NOT be buying anything with her name on it. It's a real shame because I loved her stuff when I was younger."

Hamilton continued to say that she feels the Lisa Frank brand has "discarded" the Kickstarter backers "like trash," and added that she thinks the company should "address the issues" and "refund the money it stole" before moving on.

Dana Sandersfeld, 32, from Rockford, Illinois, had a similar experience. She said she backed the campaign in April 2017, received two small makeup products, but never received a refund.

"To be quite honest, I'm pissed off," Sandersfeld said when asked about her thoughts on the Lisa Frank x Morphe line. "We went through so much just for Lisa Frank to turn around and act like nothing ever happened."

"I do not plan to buy it or support Lisa Frank in any way, shape, or form," she added. "Lisa Frank ripped off so many people and doesn't seem to even care, which is upsetting because when I was a kid I had Lisa Frank everything, from stickers to backpacks."

Lizzie Hunsaker, a 26-year-old from Seattle, described her experience backing the Glamour Dolls Kickstarter to Insider as "a bit of a roller coaster." She said that while she was originally excited about the concept and donated $75, Glamour Dolls later became "a mess" with infrequent updates and arguments between backers.

Hunsaker said she asked Glamour Dolls for a refund in August 2018 and was told she'd be given one, though she later had to get her money back from her bank after the company failed to do so. So when she saw the news that Lisa Frank and Morphe are now collaborating, the beauty fan was "shocked."

"I'm certainly not happy that Lisa Frank is collaborating on makeup when the products she had supposedly designed and OK'd years ago never got sent to the people who paid for them," Hunsaker said. "Still, I don't know for sure what went down between Lisa Frank and Glamour Dolls, so I can't definitively say that she shouldn't do this."

"If the giant mess was all the fault of Glamour Dolls, then she shouldn't be punished for their failures," she continued. "However, I think both parties have at least some of the blame for everything that went wrong, so I'm choosing to just never buy from either company again."

Like other backers, Dorothy Reichle, 41, from Buffalo, New York, said she received two small products and no refund from either brand. And now that Lisa Frank is instead collaborating with Morphe, it "feels like a slap in the face" according to the makeup fan.

"I'm not sure who I should be mad at — but I've lost a lot of respect for Lisa Frank over this," Reichle said. "I haven't seen any information on their end either, so right now, Lisa Frank is just as guilty as Glamour Dolls, and it shows some nerve to go and collab with another makeup company while a lot of us still haven't gotten what we paid for."

When asked if she'll be purchasing anything from the collection, Reichle said she doesn't think so. "It makes me feel like someone just took my money, gave me nothing, and dangled what was to be in front of my face," she told Insider.

One Kickstarter backer Insider spoke with, a 37-year-old named Stephanie from Washington, said she purchased the highest tier ($200) back in 2017 and never received products or a refund. Though she said that her past experience "still stings a bit," she'll purchase the new collection "for sure," as she describes herself as a "rainbow fanatic, makeup user, and Lisa Frank hoarder."

Morphe and Lisa Frank are confidently standing by their collaboration

In an email sent to Insider, a representative for Lisa Frank Inc. said it "entered into a business arrangement" with Glamour Dolls "several years ago."

A Morphe representative added in a separate email sent to Insider that while it doesn't "have any visibility into prior collaborations or projects with other brands," it's "excited to partner with Lisa Frank."