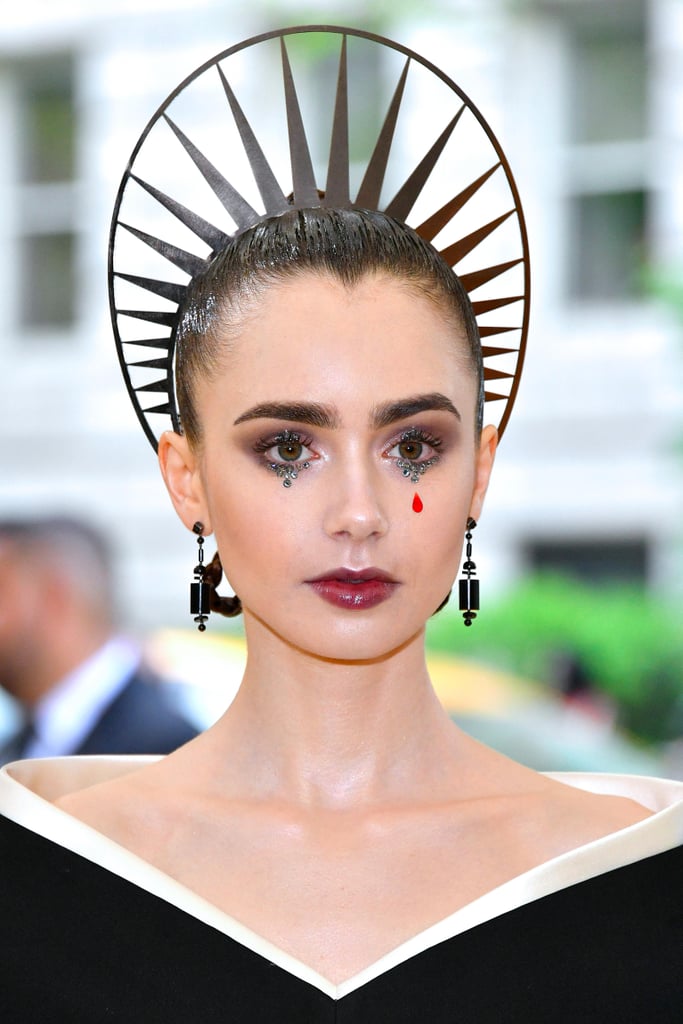 Lily Collins sauntered into the 2018 Met Gala wearing a black, gossamer Givenchy gown, hair that had been transformed into an intricately braided sculptural updo complete with futuristic crown, and makeup that was literally inspired by the dark arts. The whole look was very gothic chic.

“When I heard the theme for the evening, I automatically leaned into the idea of the occult and the dark arts. “Yes, there’s a lot of romanticism in religious art, but there’s also a heavy sprinkling of the gothic. It just felt like a fun angle to explore,” said Fiona Stiles, the celebrity makeup artist responsible for the look, in a press release.

Stiles created the look with Lancôme products, starting with their Advanced Génifique Youth Activating Serum ($142) to prep the skin, along with Teint Idole Ultra 24H Longwear Foundation ($47) and Effacernes Concealer ($31) for the base. She topped it with Lancôme Absolue Powder in Ecru Light ($58).

“I wanted it to look like moonlight on marble skin, a reference to the masters’ paintings and old marble sculptures,” she told POPSUGAR via email.

For the hollowed-but-glamorous smoky eye, Stiles used Lancôme’s Color Design Eyeshadow in Smokey Brown ($22) and layered Volcano on top to create sheen and dimension. For the lips, she added a sheer wash of Le Metallique Lip Gloss in Purple Onyx ($22), which complemented her undertones and played into the occult theme.

Lily also wore gunmetal Swarovski crystals on the center of her upper lid and underneath her lash line, and a blood-red teardrop was placed underneath one eye.

Stiles told us, “The crystals were meant to be celestial tears, and the blood red tear drop was a nod to stigmatas and the tears of the virgins. You know, lighthearted stuff . . .”

Makeup inspired by masterpiece sculptures, the occult, and stigmata? This might be the coolest Met Gala look of the night, and we love that Lily was game to add this moody layer of dimension to the Heavenly Bodies theme.