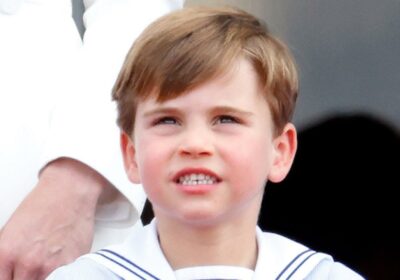 But an eyewitness for HELLO! revealed what happened during the sweet moment when the four-year-old was reunited with his parents and siblings at Kensington Palace.

“Louis was waiting in the car with his nanny and jumped into his mum’s arms as soon as she got out of the helicopter. He then rushed off with his brother, sister and dad as they walked towards their home, holding William’s hand,” the onlooker witnessed.

Later that evening, Louis was left at home in the safe care of his nanny once again when the family attended the Queen’s Platinum Jubilee Party at the Palace concert which was watched by millions at home.

Prince Louis has been involved in some of the celebrations

The youngest Cambridge child did get a look in on the action though when he joined the carriage along the Horse Guards Parade for Trooping the Colour. Louis was watched carefully by his sister Charlotte, who stopped him from waving too much while they soaked up the crowds.

Meanwhile, Prince George seemed to be ignoring his brother and sister’s interaction, as he looked out onto the crowds, and exchanged some chitchat with his mum, who sat opposite her three children.

Louis also featured on William and Kate’s official Instagram page when the family were baking for the Jubilee as he was pictured alongside his siblings inside the kitchen of one of their homes admiring the cakes they had made.

The trio have a close bond and the Queen’s Platinum Jubilee has also been a chance for them to meet with their wider family, perhaps including Prince Harry and Meghan Markle’s daughter Lilibet who Her Majesty met for the first time on Saturday.