‘Aggretsuko’ Is A Workplace Comedy Where Rage Is Front And Center To be a cog in the corporate machine is to subject yourself to injustices large and small in the name of eking out a living: tiresome office politics, a jammed printer, a stolen lunch, or worse, sexual harassment. Just look at the seminal “9 to 5,” “Office Space,” “The Office” and “Corporate,” all pop cultural depictions that draw on the inescapable ennui of zombielike number-crunchers and buttoned-up executive assistants who subsist on burnt coffee and keyboard cleaner, waiting for the day their crappy co-workers and abusive bosses get their due.

Netflix and Sanrio’s new anime series “Aggretsuko,” which debuted on the streaming service on Friday, takes the mundane workplace frustration many of us have come to know and cranks the dial to 11. The series follows Retsuko, an endearing red panda who wants nothing more than to get through her work days without incident. And when real life doesn’t measure up to her hopes, she turns to the only thing that temporarily soothes her discontent: death metal. 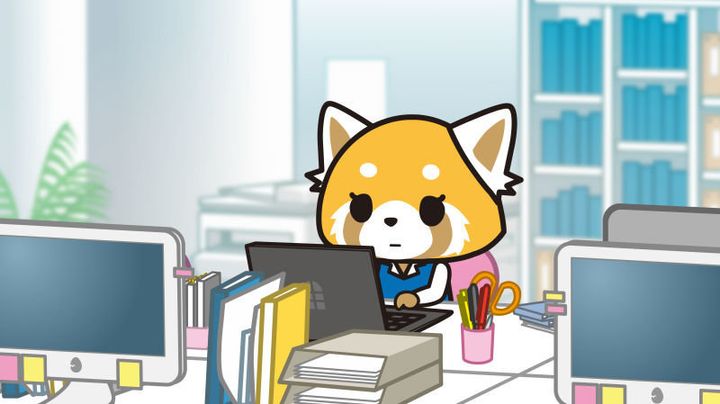 There’s a lot for Retsuko to get angry about. She works in accounting for some vague corporate entity, one of several lackeys made to tidy the desk of her rage-inducing boss, a literal chauvinist pig. She heads to the office in an overstuffed commuter train, only to have to face a rumor-spreading hippopotamus and a Komodo dragon who loves to dump extra work on her. She faces small, relatable dilemmas outside her job, too: feeling conflicted over how much to give for a wedding present, or simply wanting to shop without constant check-ins from a store clerk.

She gets by thanks to her work buddies — a chill fennec fox with unmatched social-media stalking skills and a hyena in slacks (who, based on Twitter’s consensus, seems to be the most crush-worthy character). She’s in awe of two more experienced colleagues, women who strut down the hallways with an air of #girlboss assuredness, but who actually share many of our titular hero’s insecurities.

Retusko channels all of this insecurity and rage into a death-metal hobby that lets her express exactly how she feels. She tries to hide it first from her more intimidating female co-workers and then from a love interest, but realizes her truest self lies within these moments. It’s in these small vignettes where Retsuko is able to be fully unvarnished: “You’re a shitty boss!” she scream-sings during a work happy hour. “Death metal is my soul!!!” she confesses in another episode.

The sharp contrast between Retsuko’s adorable outward appearance and her unbridled rage-singing is played for laughs in each of the series’ 10 episodes, yet doesn’t become tiresome. Perhaps because it’s rare to see a female character, animated or not, succumb fully to her anger, especially in a way that’s seen as a net positive. Retsuko’s metal habit provides a private, nondestructive space to contend with the pitfalls of an early-career slog.

Requiring a standing appointment at a karaoke bar might be self-care taken to its most extreme, but Retsuko isn’t a role model. She’s just trying to make it through her 20s.

The lyrics of Retsuko’s throat-murdering screams are the cherry atop her rage sundae, adapting to fit her crisis du jour. In one episode, she determines that all she needs is a wealthy partner to escape her current drudgery. Cue the metal guitars, and the passionate cry of future financial security: “MATRIMONIAL FREEDOM!” It’s good.

American audiences might not immediately associate the show with Sanrio, the Japanese company best known for Hello Kitty. Retsuko, along with Sanrio’s listless egg character Gudetama, stand out from the company’s other happily uncomplicated creations by virtue of their issues. Even Retsuko’s resting “cute” face lacks a smile.

The full-length series, inspired by shorts that aired on Japan’s Tokyo Broadcasting System network, hits on an interesting spot. It feels intended for an audience older than do kid-adult crossovers like “Adventure Time” or “Steven Universe.” Yet its lightness — despite all its rage — doesn’t feel quite in line with the darker adult-cartoon stalwart (and fellow Netflix original) “BoJack Horseman.” Still, it’s pointed enough to feel true to life, even if heavy metal isn’t your genre.

The series is generally self-aware, of the moment and endearingly weird: Retsuko’s fennec fox friend, for example, details a pattern in their co-worker’s Instagram feed, nailing down her routine of food, selfie and occasional “thigh shot” pictures. But the office caricatures aren’t always charitable. That same ’gram-friendly co-worker, a starry-eyed doe who talks in a baby voice, also allows the gross boss to flirt with her to her benefit. She’s clearly set up as a contrast to Retsuko and company — surely they’d never stoop so low — but her overly ditzy depiction feels a little one-note at first.

Each episode is a short 15 minutes, putting “Aggretsuko” in the ranks of Netflix’s other feel-good original fare that requires minimal time commitment (looking at you, “Nailed It”). The effect of catching a handful in one sitting is like having read several culturally savvy comic strips: bright colors, enough for a laugh, but not a lot of narrative depth. Fortunately, “Aggretsuko” isn’t trying for prestige television; it succeeds as a cathartic mirror to contemporary office life — and the activities that sustain us once we’ve punched out.

Looking for more streaming recommendations? Check out the best of what’s new on Netflix, Hulu and Amazon on Streamline.