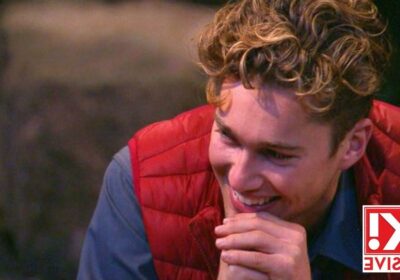 AJ Pritchard has opened up on a funny message he was sent by I'm A Celebrity co-star Vernon Kay.

The dancing star, 27, was a contestant on ITV show I'm A Celebrity… Get Me Out Of Here! 2020, alongside other famous campmates, including winner Giovanni Fletcher.

Now, as the new series gets under way, AJ admitted their I'm A Celebrity WhatsApp group has been "popping off."

AJ told OK! in conjunction with William Hill: "Our group WhatsApp has been popping off the last couple of weeks. One of the messages that really got me was one from Vernon Kay.

"He was like 'Alas, the castle is ours no more, they've taken control,' and we were all like omg yeah, we've had the castle for one year, but it's not ours anymore.'"

Strictly star AJ, who recently opened up on his relationship, admitted he'll definitely be tuning in to the show this year, but can't pick a winner just yet.

"I can't wait to see the trials and castle from the other side. Who do I think is going to win, well, I haven't got a crystal ball so I can't call it."

Sharing what it takes to be crowned champ though, AJ said a "big following" is key.

The 27 year old added: "I think you need to have a large following, it does help.

"Also I think with a show like I'm A Celeb and Strictly being true to yourself and honest is a way to really connect with people. It's how I've always tried to be – smiley, open and honest and be happy when you're happy and sad when you're sad.

"If you're going to put an act on there's no point with TV, it doesn't work, why waste your energy doing that?"

On show secrets, AJ said that the bonds between the celebrities on the show aren't shown enough.

"One thing that is really hard to get across is that you have such great conversations and really get to know each other in about ten minutes in there, because the distraction of having a mobile phone in your hand is removed," he explained.

AJ continued: "They don't show that on TV so you can't really see we had a great time but no-one sees it. It's the secret about why people get connected emotionally and as a group but you can't see that on TV, so it's a really hard one to get across."

The star said "never say never" when it comes to whether or not he'll be appearing on another reality show in the future.

This year's I'm A Celebrity already has viewers hooked, but fans were left shocked when TV presenter Richard Madeley left the show just a few days in.

While the TV personality insisted he’s “fine”, due to his stay in a hospital with other people he has had to bow out of the show for the “safety” of his other celebrity campmates.

Sharing an official statement to his Instagram page, Richard, 65, explained he’s “gutted”, but knows his early departure is for the best.

AJ Pritchard was speaking to OK! Magazine in conjunction with William Hill