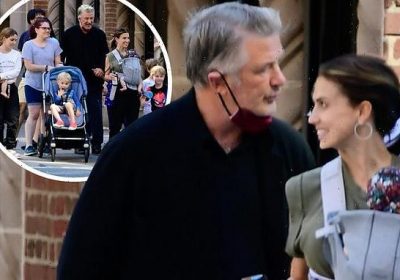 Alec Baldwin and his wife Hilaria are not afraid to ask for a little help when it comes to taking care of their six young children.

And on Saturday, the couple were spotted enjoying a stroll through NYC with their brood, along with a few of their family’s trusted nannies. 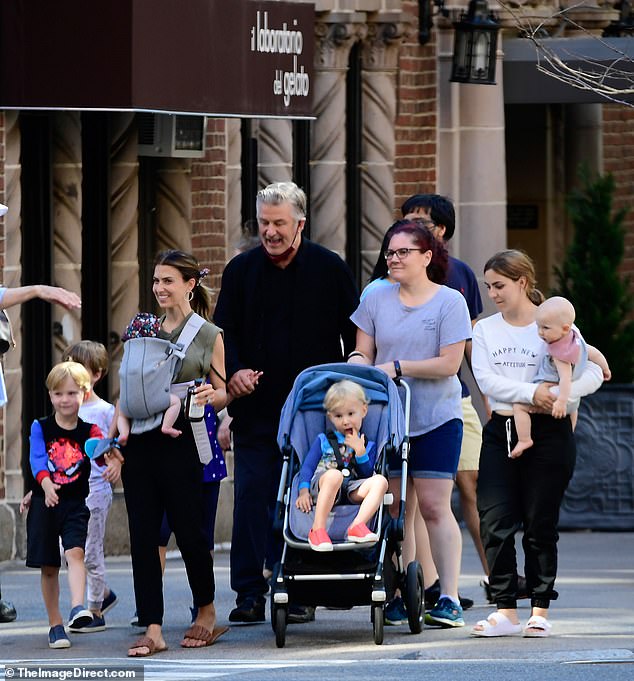 Family outing: Alec Baldwin and wife Hilaria were spotted enjoying a stroll through NYC with their brood, along with a few of their family’s trusted nannies, on Saturday afternoon

Hilaria was often seen leading her family down the city sidewalk with her and Alec’s newest arrival Lucia Maria strapped to her chest in a baby carrier.

She also alternated holding hands with two of her older sons, who strolled beside her.

The yoga instructor and podcaster, 37, was all about casual-comfort as she graced the public in an olive-green sleeveless top, black pants, and a pair of brown sandals.

She wore her long, brunette hair pulled back into a ponytail and she appeared to be wearing little to no makeup.

With a big beaming smile on her face, Hilaria was the picture of contentment while engaging with the kids, and when possible, her longtime husband. 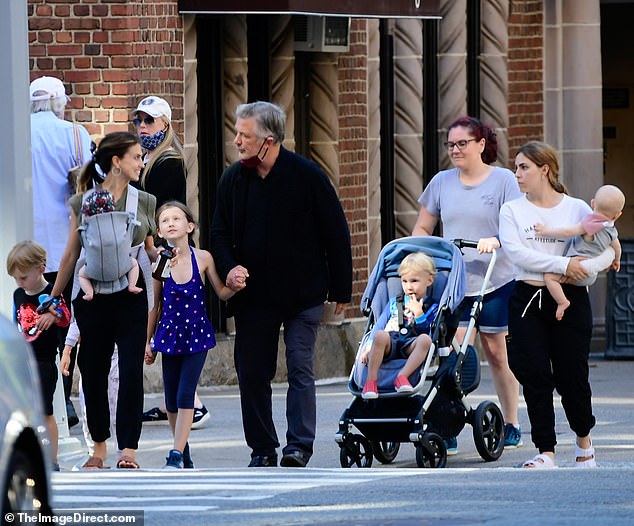 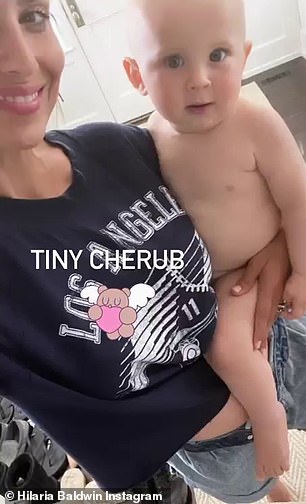 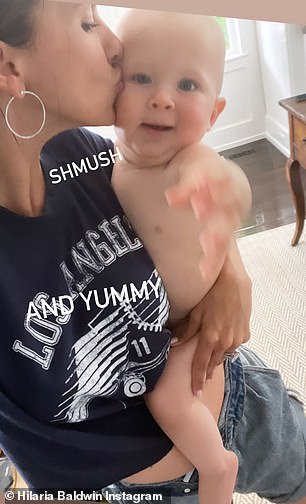 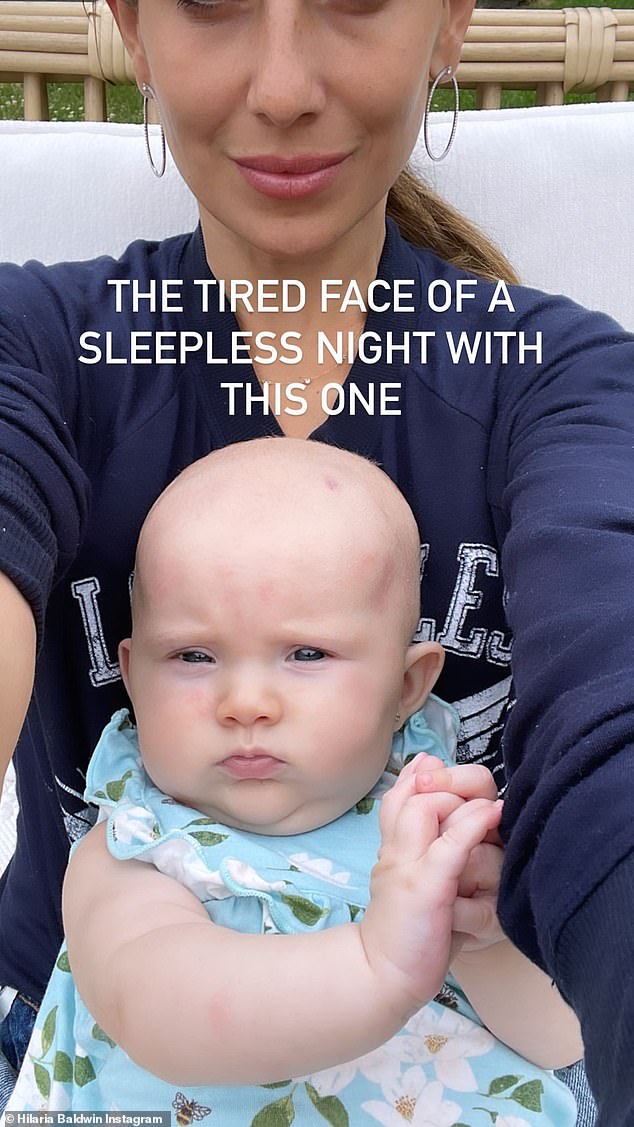 Long nights: The Mom Brain podcast co-host confessed to be losing sleep due to Maria

Alec, 63, seemed to be daughter Carmen’s center of attention during much of their family outing. He held tight to her hand while the nannies followed close behind with Romeo in a stroller and Eduardo in one of their arms.

Baldwin donned an all black-ensemble consisting of slacks, an untucked long-sleeve shirt, and leather shoes.

All of the boys appeared to be dressed similarly in shorts, t-shirts and sneakers, with the exception of Eduardo, who was in a cozy grey onesie.

On Saturday, Hilaria took to Instagram and shared a few videos and photos taken during some quiet time with her two newborns – Eduardo and Maria. 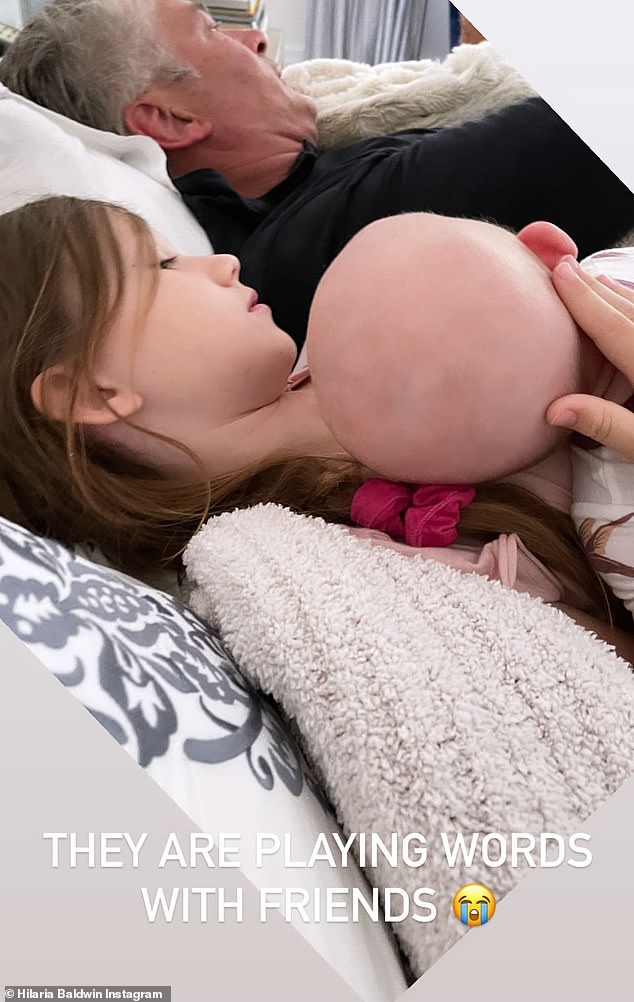 Bonding: Carmen snuggled up with her dad and what appeared to be sister Maria 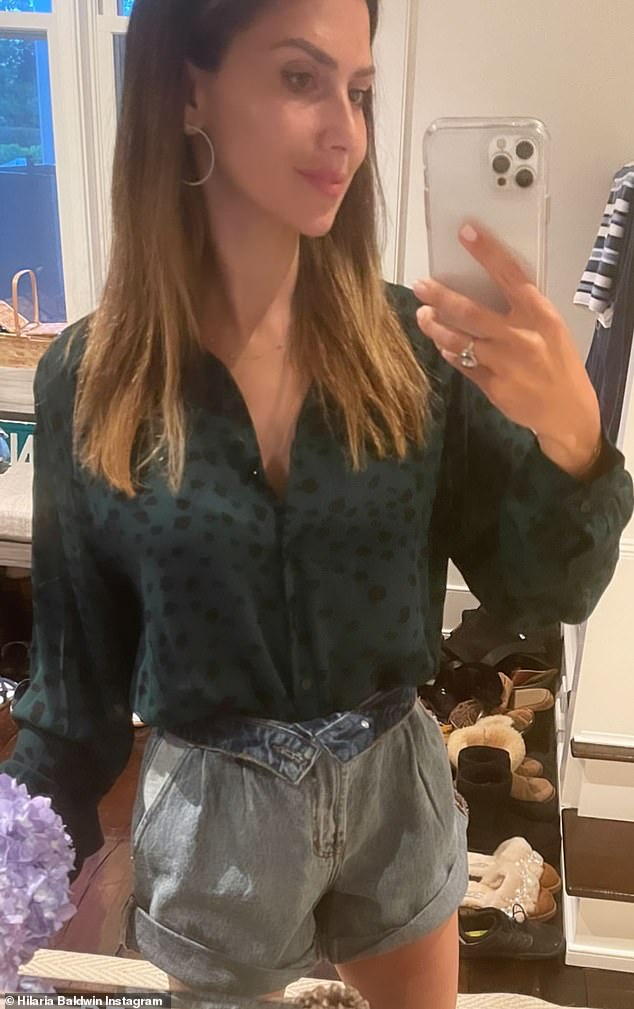 Toned: Hilaria showed off her fit figure in a denim shorts and button-down shirt combination 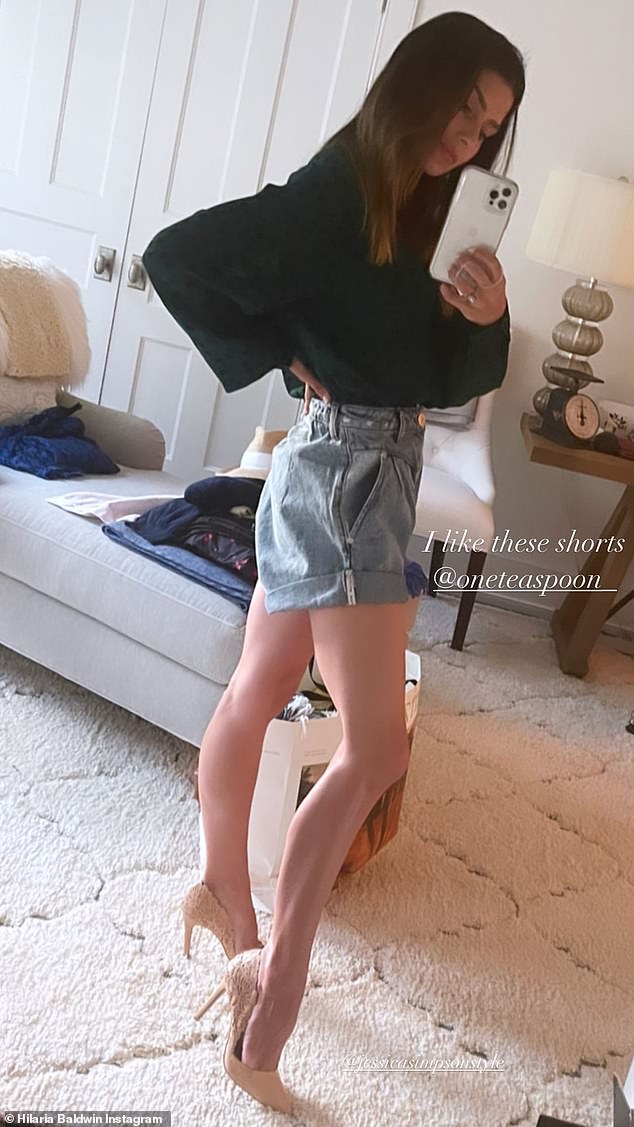 Say cheese: The Yoga instructor showed off the results of all her hard work in a full-body snap

She also shared an adorable picture of Carmen laying in bed next to her dad with what appeared to be sister Maria snuggled up in her arms.

On Friday, Hilaria took a moment to highlight herself as she showed off her fit figure dressed in a pair of blue denim shorts and a black button-down shirt.

In a follow-up clip, the brunette beauty flashes her midriff in a cropped white t-shirt as she did a sexy slow dance in a mirror selfie with Maria in her arms.

Earlier in the week, the couple, who have been married since 2012, brought the entire family of eight to the premiere of Alec’s new animated film – The Boss Baby: Family Business.

The event included all eight of them striking poses together on the red carpet. 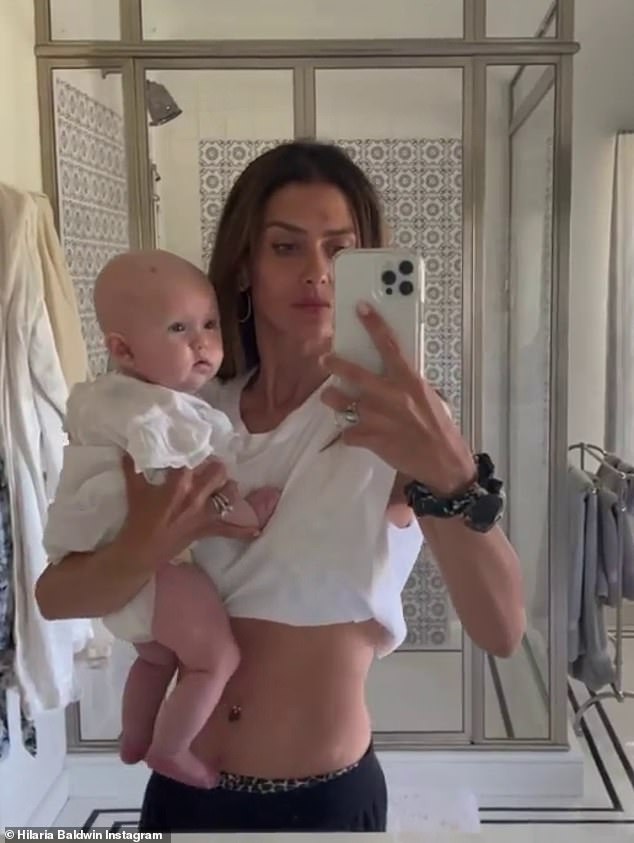 Ab work: The Massachusetts native highlighted her midriff in a cropped white t-shirt as she did a sexy slow dance in a mirror selfie, with Maria in her arms 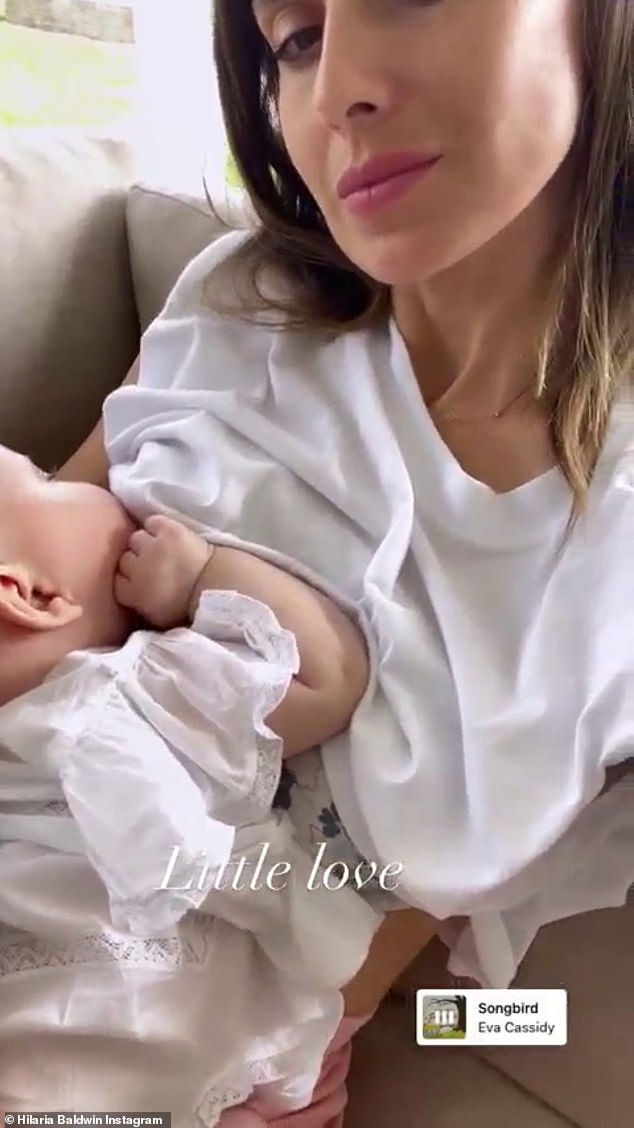 Mother’s nature: Hilaria looked content with her role as mom while breastfeeding Maira 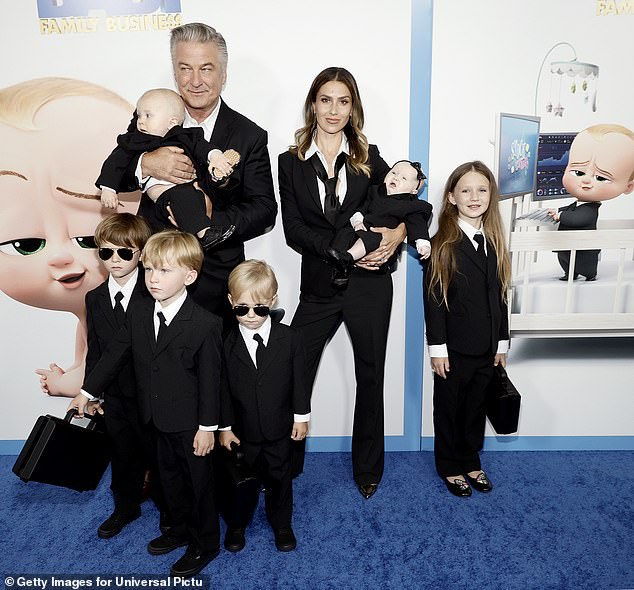