Amal Clooney, 44, is a dead ringer for Angelina Jolie, 46 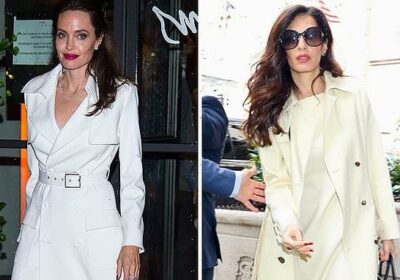 Amal Clooney, 44, is a dead ringer for Hollywood siren Angelina Jolie, 46, as she models a cream colored dress and matching coat in NYC

Amal Clooney is a 44-year-old British–Lebanese barrister but on Wednesday she resembled a certain Hollywood movie star.

The 44-year-old wife of actor George Clooney bared a striking resemblance to 46-year-old Angelina Jolie in her cream dress and matching trench coat as was seen on a sidewalk in New York City.

Amal and Angelina have a close association: Jolie used to be wed to Clooney’s good friend and Ocean’s 11 co-star Brad Pitt. But the two beautiful brunettes don’t seem to have ever been photographed together.

Similar: Amal Clooney is a 44-year-old British–Lebanese barrister but on Wednesday she resembled a certain Hollywood movie star. The 44-year-old wife of actor George Clooney bared a striking resemblance to 46-year-old Angelina Jolie 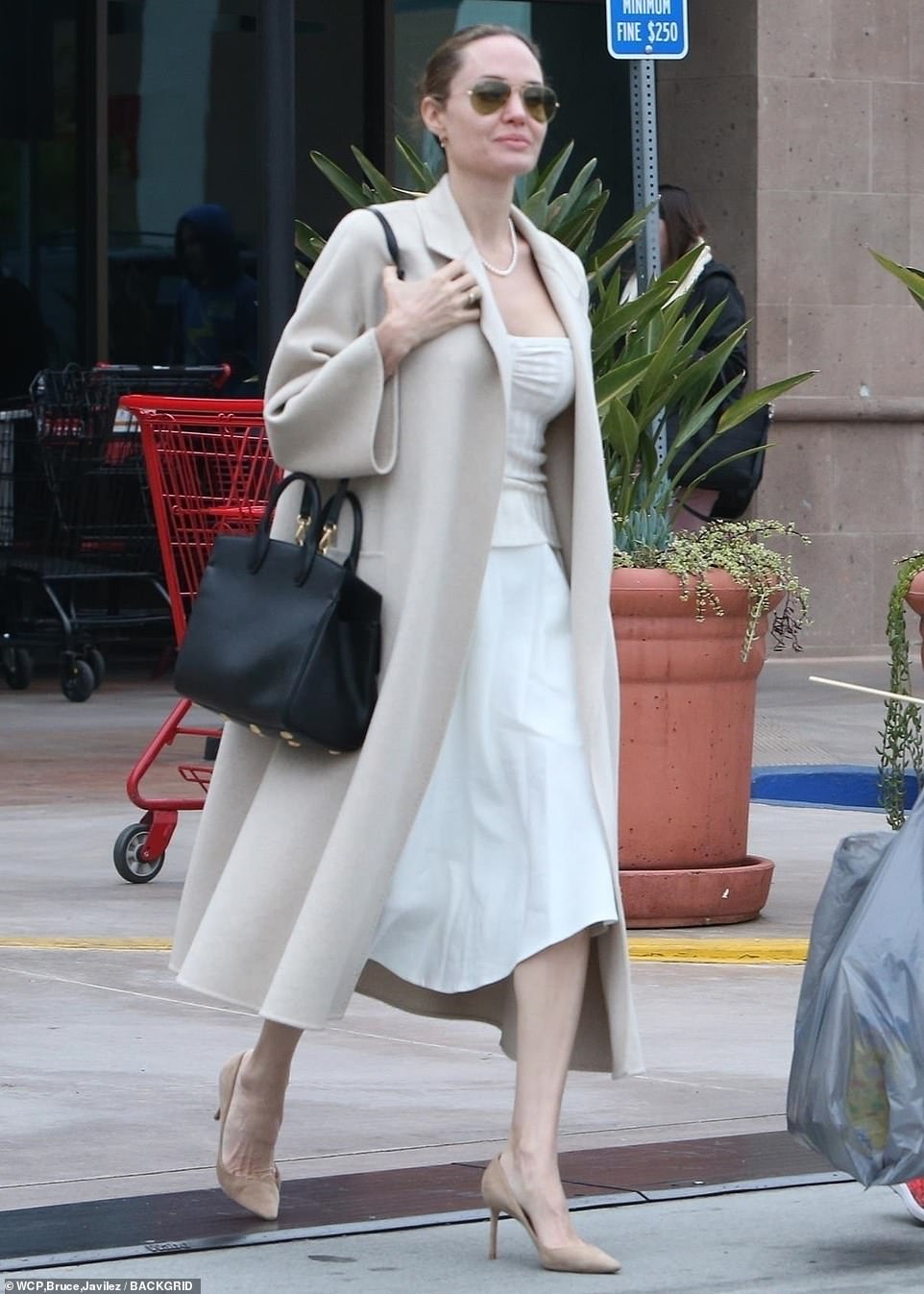 She loves the pale look: In 2019 Jolie wore a beige coat with cream colored dress, beige heels and a black purse

Clooney is two years younger than Jolie and two inches taller: Angelina is 5ft7in and Amal is ft9in.

Amal looked elegant during her day out in Manhattan in a cream colored mini dress which had a short hem that revealed her slender and tanned legs.

The coat did all the talking however as it was nicely tailored with fashionable dark buttons and an undone belt.

Clooney finished off her look with snakeskin heels that were a smart choice to add a pop of pizzazz to her ensemble. 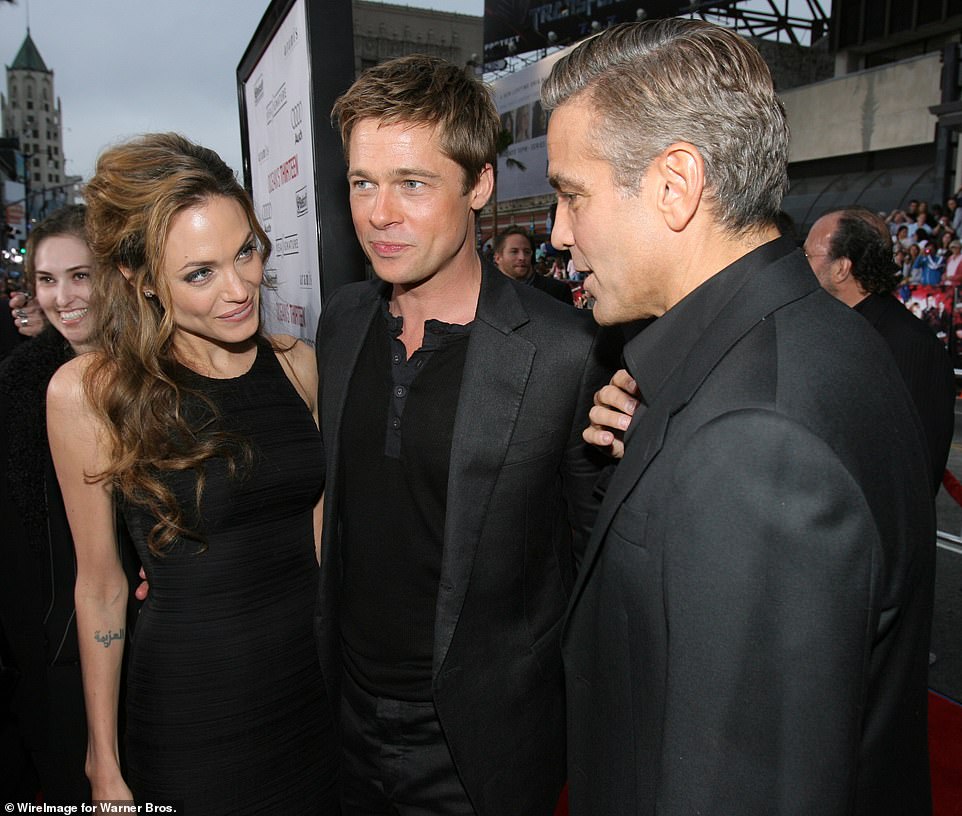 In 2007:  At the premiere of Ocean’s Thirteen at Grauman’s Chinese Theater in Los Angeles 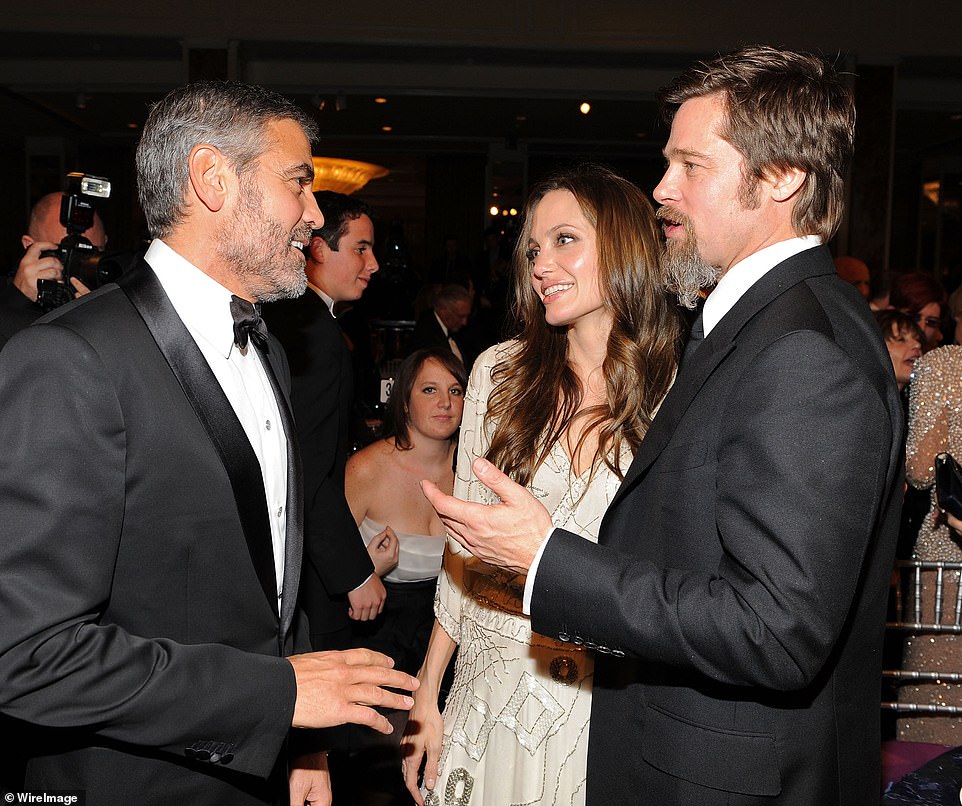 In 2009: Clooney, Jolie, and Pitt attend the UNICEF Ball held at the Beverly Wilshire Hotel in December 2009 in Beverly Hills, 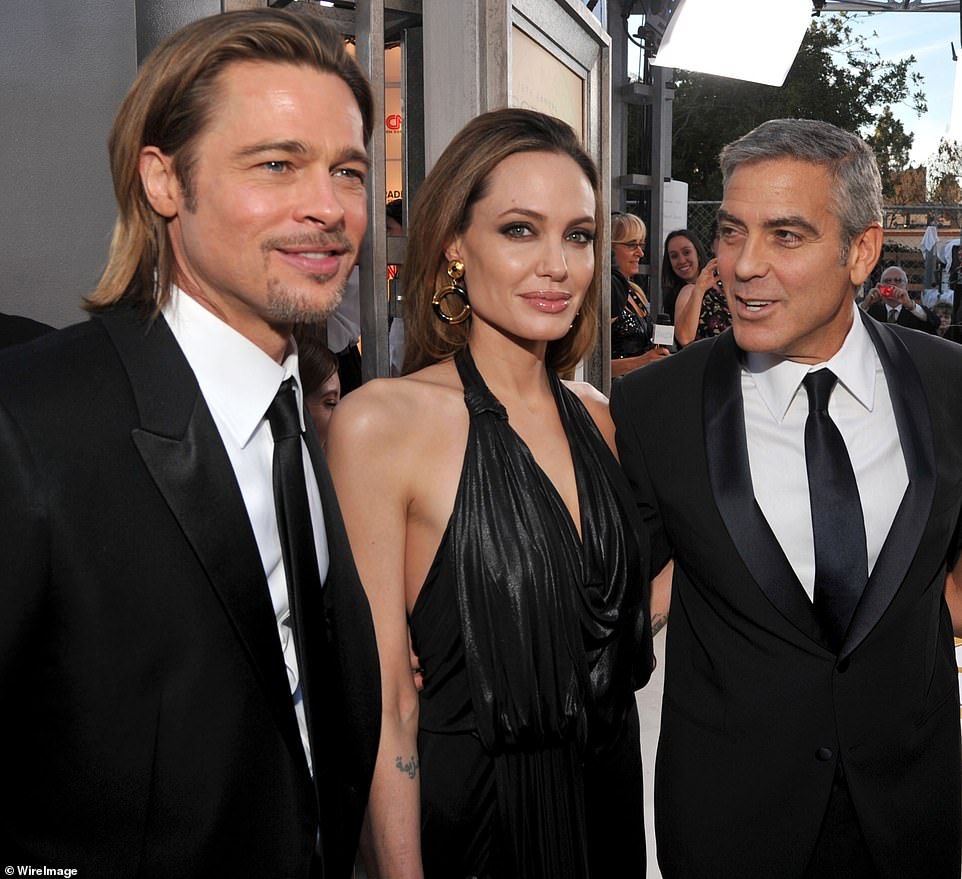 The brainy lawyer wore her dark hair down in soft curls as she had on ruby red lipstick for an added touch of glamour. Her black oversized sunglasses nicely matched her black brief case.

Amal and Angie have a few things in common.

According to the UN website, Jolie focuses on major crises that result in mass population displacements, undertaking advocacy and representing UNHCR and the High Commissioner at the diplomatic level. 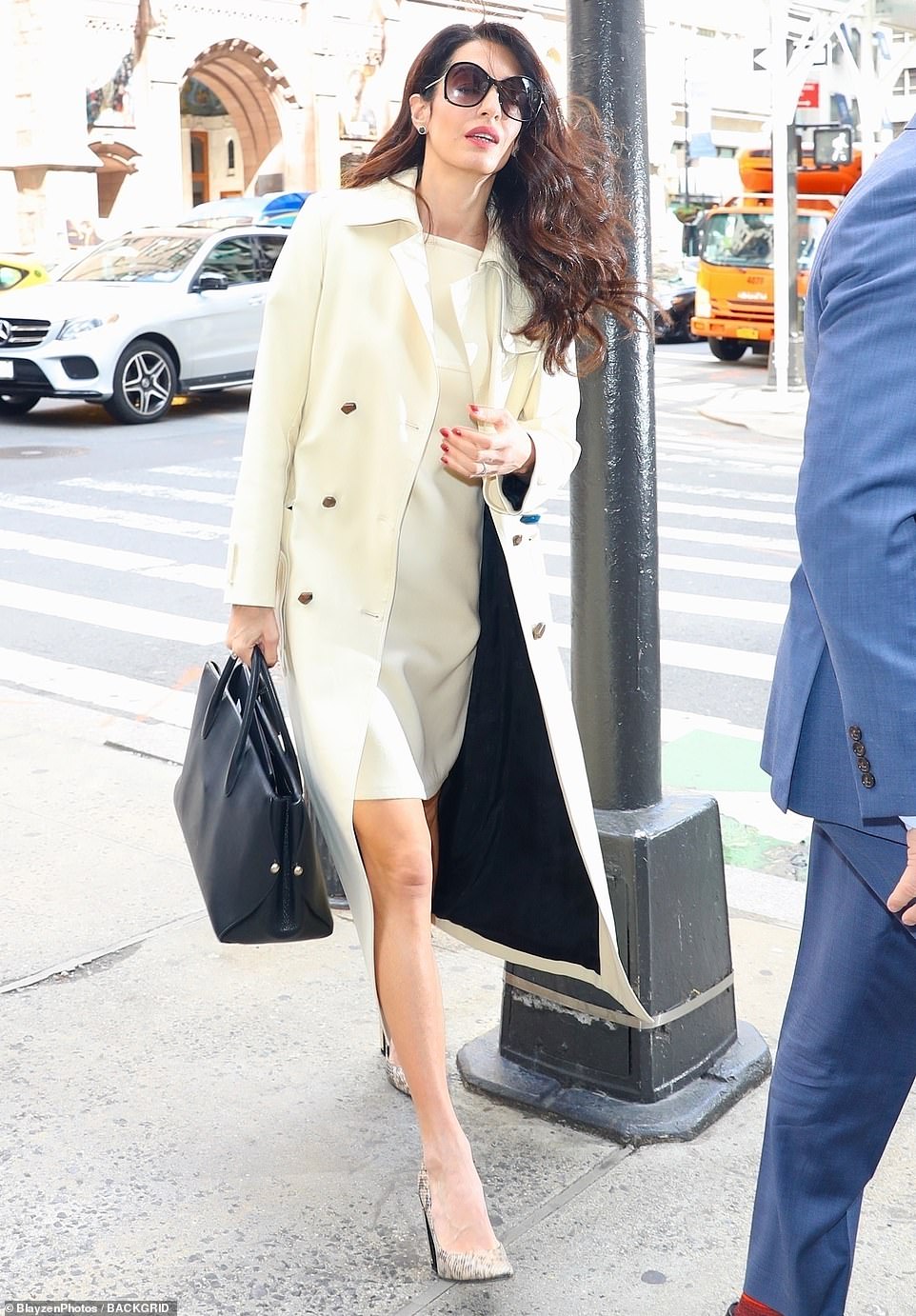 Polished to perfection: Amal looked elegant in the short cream dress which had a short hem that revealed her slender legs 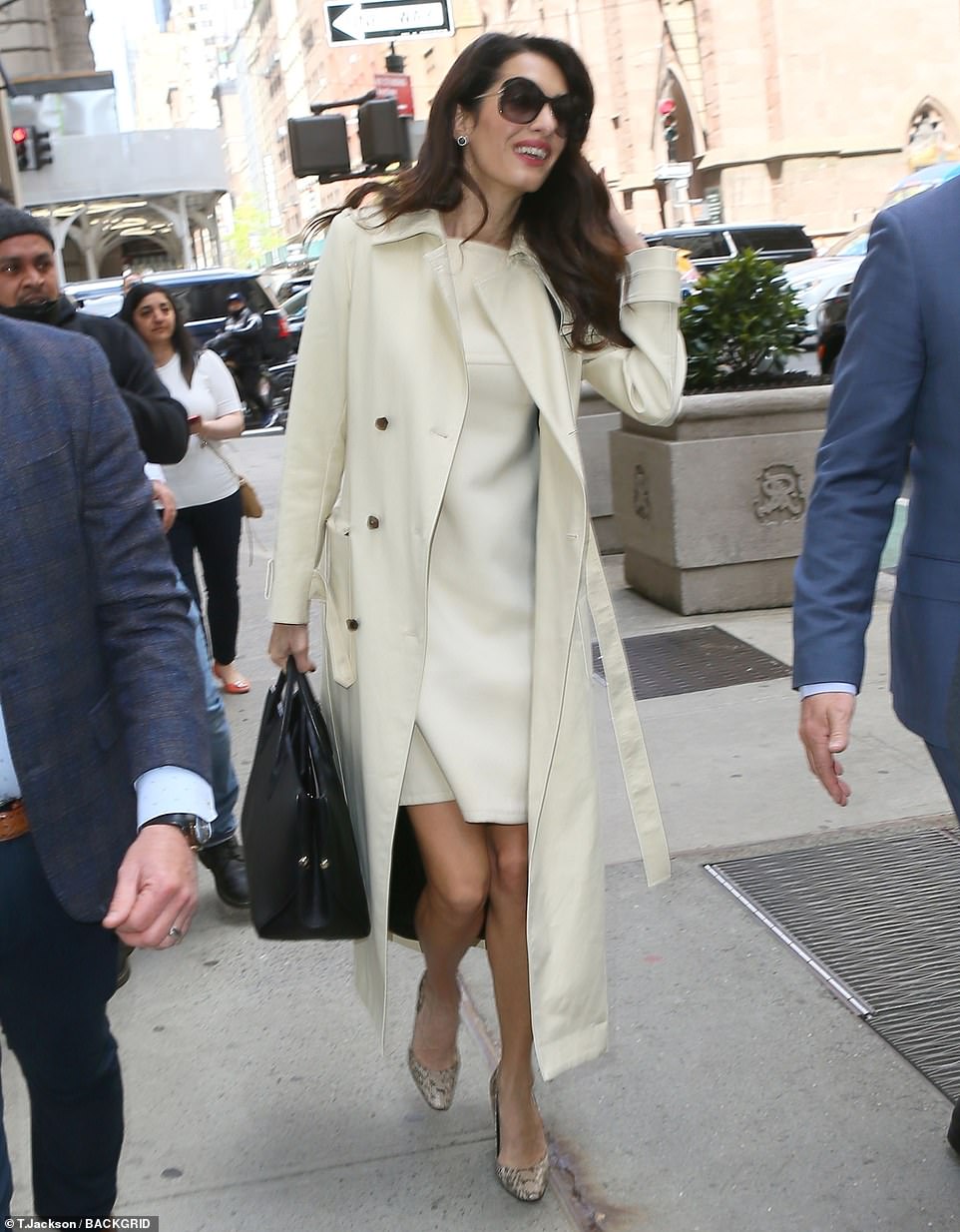 On the go: The coat did all the talking however as it was nicely tailored with fashionable buttons

‘She also engages with decision-makers on global displacement issues,’ it read on the UN website.

‘Through this work, she has helped contribute to the vital process of finding solutions for people forced to flee their homes,’ it was stated.

Clooney is a barrister at Doughty Street Chambers in London. She specializes in international law and human rights.

Despite the interest in her high-profile marriage to Clooney, Amal tends to be fairly private when it comes to their relationship, but she departed from her norm last month in an interview with Time. 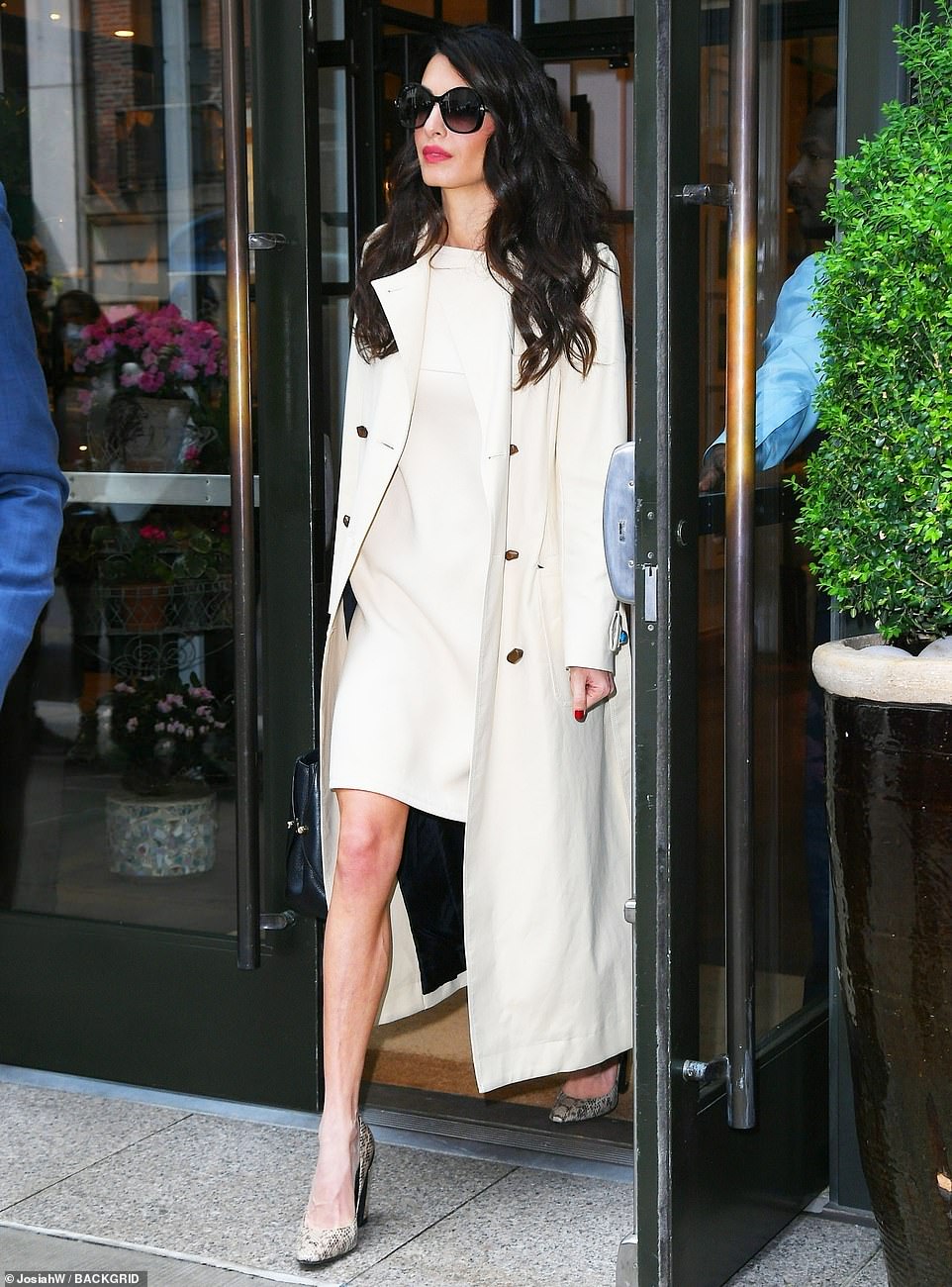 In step with fashion: Clooney finished off her look with snakeskin heels that were a smart choice to add a pop of pizzazz to her ensemble

She gushed about her connection to the Oscar winner and raising their four-year-old twins Alexander and Ella.

‘Marriage has been wonderful. I have in my husband a partner who is incredibly inspirational and supportive, and we have a home filled with love and laughter,’ she said.

‘It is a joy beyond anything I could ever have imagined. I feel so lucky to have found a great love in my life, and to be a mother — this is how I get my balance.’

The world-famous lawyer also opened up about what drove her to focus on human rights cases.

‘I’m responding to what I see happening in the world. A world where the guilty are free, and the innocent are imprisoned — where the human-rights abusers are free, and those who report on the abuses are locked up,’ she said.

‘As a lawyer, I can do something about that. Or I can at least try. So my work is focused on trying to help liberate victims and prosecute perpetrators — and by extension, our foundation’s work is trying to really do that at scale and globally.’ 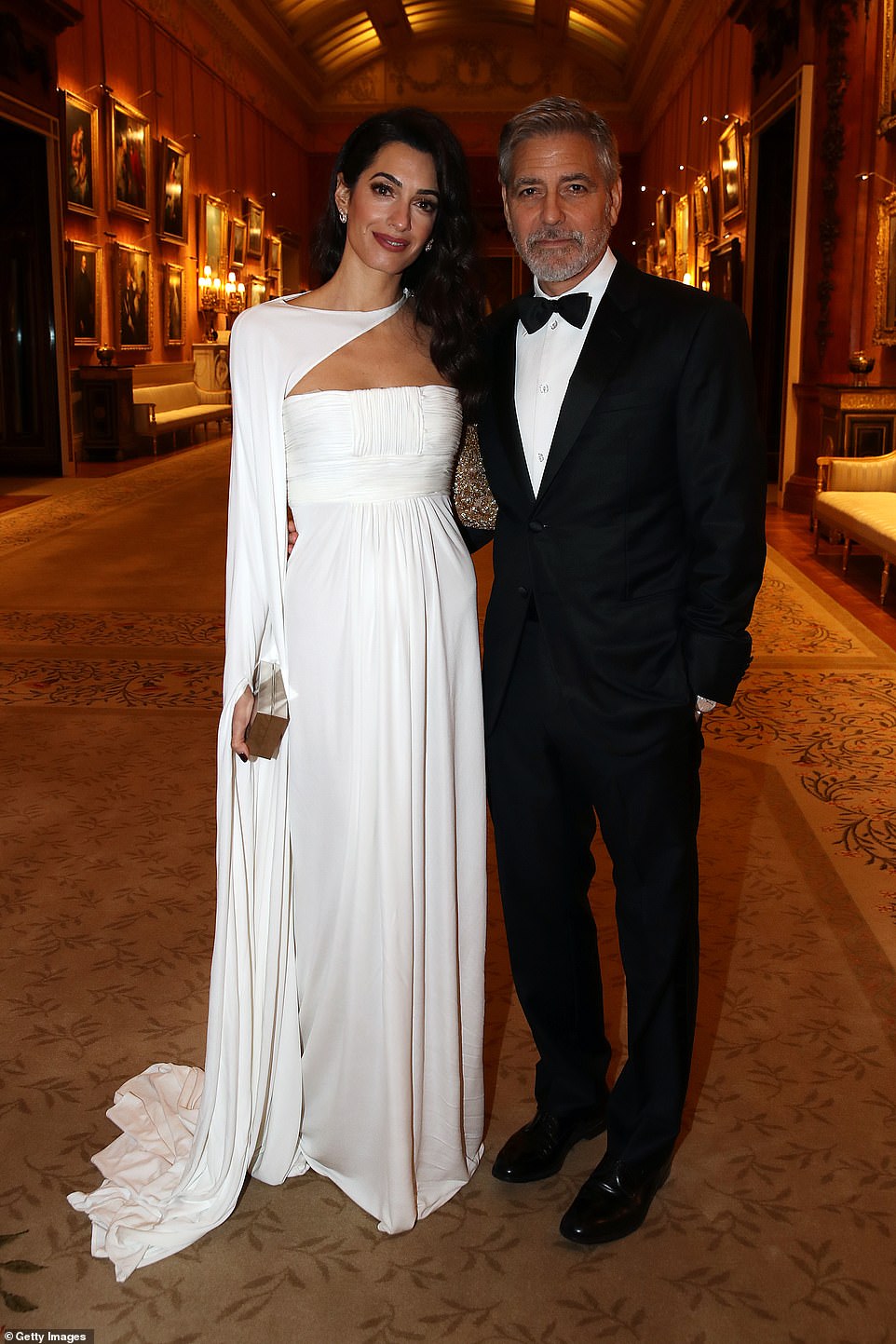 A happy couple: Amal and George at a dinner to celebrate The Prince’s Trust, hosted by Prince Charles, Prince of Wales at Buckingham Palace in March 2019 in London