‘I’m immensely proud’: Amal Clooney’s mother makes rare comment about her daughter and son-in-law George as she gushes about their charitable work

Amal Clooney’s mother Baria Alamuddin has made a very rare comment about her daughter and son-in-law to praise their charitable work.

The political journalist gushed that she was ‘immensely proud’ of Amal and George’s involvement in several good causes and activism.

Speaking with HELLO! after the couple made the magazine’s Kind List, the proud mum added that kindness was especially needed in the current global climate. 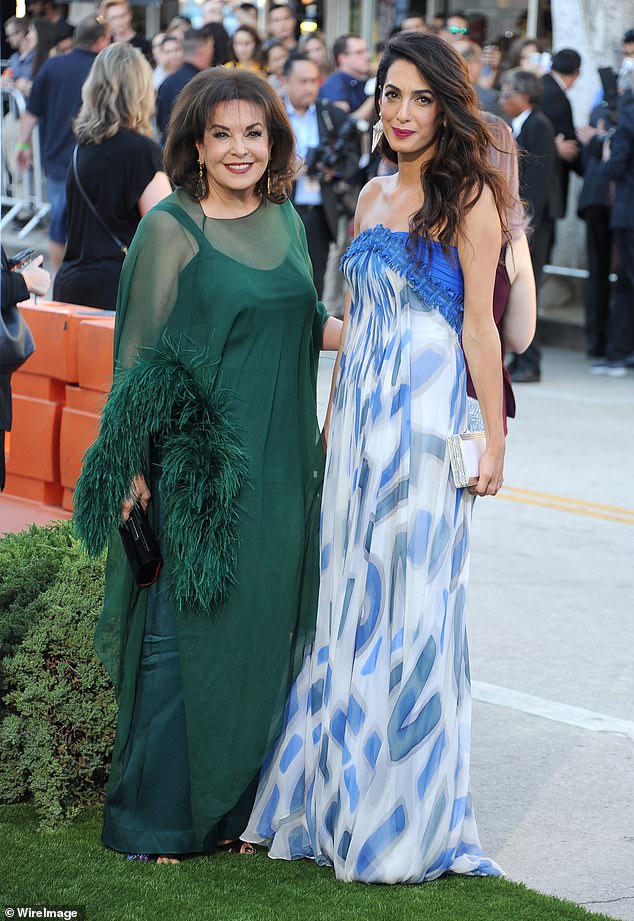 ‘Immensely proud’: Amal Clooney’s mother  Baria Alamuddin has made a rare comment about her daughter and son-in-law George as she gushed about their charitable work (pictured in 2017)

Baria said: ‘I am immensely proud of all Amal and George’s charitable work, in too many fields to do justice to here.

‘Particularly deserving of mention is George’s decades of activism on behalf of Sudanese people; along with Amal’s pro bono activities on behalf of journalists around the world.

‘I passionately believe that all acts of human kindness serve to make this world a less severe and forbidding place; and in the current global climate of intolerance, xenophobia and demonization we are in desperate need of every drop of kindness we can get.’ 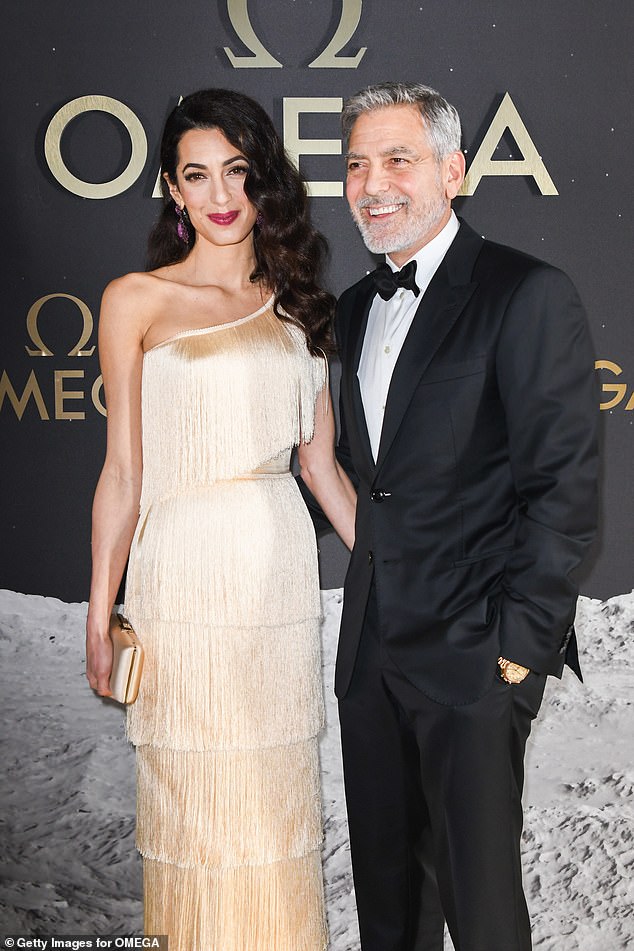 Kind: The couple have donated millions to worthy causes from personal funds and the Clooney Foundation for Justice over recent years (pictured in May 2019)

Amal joins a group of stars, royals and influential people around the world are being celebrated as part of HELLO!’s first Kindness Summit, a virtual day-long event which will inspire and spread kindness, building on their #HelloToKindness campaign.

The Clooneys have been very generous with their money over the years, with the couple recently donating money to their local theatre The Mill at Sonning Theatre, in Berkshire.

While in April they also gave more than £800,000 to charities helping the NHS, Lebanese food banks and the Los Angeles Mayor’s Fund.

Amal and George also founded the Clooney Foundation for Justice which advocates for justice through accountability for human rights abuses around the world. 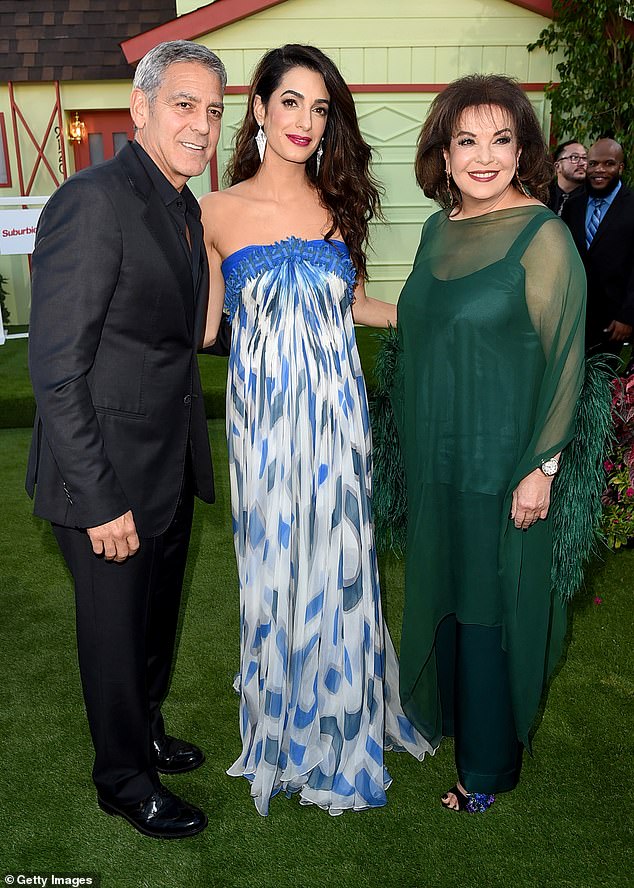 Family: Baria, who is a political journalist, does not often speak about her famous daughter and son-in-law (pictured together in 2017)

After a white nationalist gathering in Charlottesville in 2017, the Foundation gave a $1million grant to the Southern Poverty Law Center, reports SPLC news.

Amal’s mother Baria has rarely spoken about her family, however she did discuss her daughter in a feature piece with Vogue back in 2018.

During the interview Baria revealed that doctors initially told her to abort her pregnancy due to a placenta condition but she ignored their advice after having dreams of her future daughter’s face.

‘My pregnancy with Amal was a rather difficult one,’ Baria said, adding that she spent two months in hospital with placenta previa. 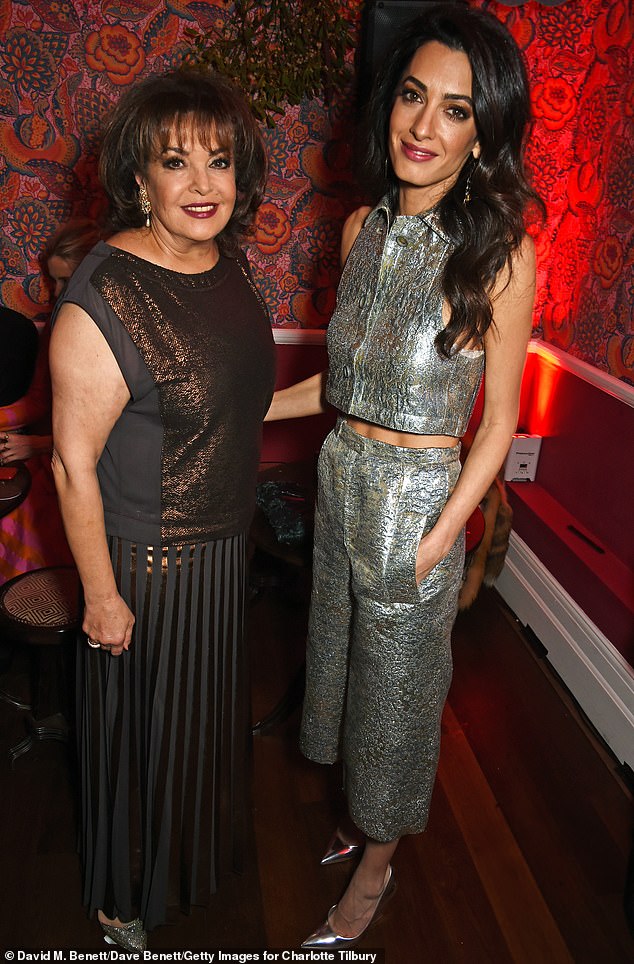 ‘At some point I was told that I should lose the baby. I said no. I kept on having these dreams in which I would see her face and how she was going to look.’

Baria said Amal – who now has three-year-old twins Ella and Alexander with husband George – was born ‘exactly’ as she saw her in her dreams.

Amal, who was born in Beirut, is Baria’s second daughter with husband Ramzi. They named her Amal, which means ‘Hope’ in Arabic, given she was born during a pause in Lebanon’s civil war.

The Alamuddins were always travelling around given Baria’s job as a journalist and Ramzi’s career as vice president of the Universal Federation of Travel Agents’ Association, which consults with the United Nations.

When Amal was young the family moved to London where she excelled at school.