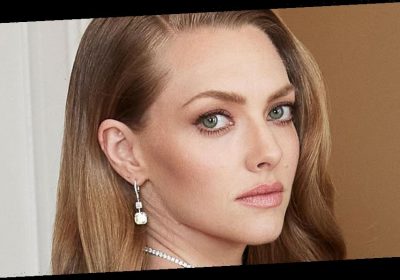 Amanda Seyfried's blooming Oscar de la Renta gown has more than a bouquet's worth of flowers, but her jewelry may just be enough to take attention away from her showstopping pink gown. She's nominated for the very first time for her role as Marion Davies in Mank and to celebrate the occasion, Forevermark offered up two pieces, which combine for more than 22 carats and ring in at about $1 million.

"It just feels really good; it's my first nomination," Seyfried told Entertainment Tonight of her nomination. "It'll sink in. There's so much going on… and life is happening. So it's gonna take a day." Tonight's pieces include the Forevermark Exceptional Diamond Vivid Yellow Drop Earrings set in Platinum and 18k Yellow Gold, which weighs in at 10.43 carats. On her neck, she's got the Forevermark by Rahaminov Diamond Choker set in 18k White Gold, which is 12.35 carats. During her interview with Giuliana Rancic, Seyfried said that she was grateful that the ceremony was remote this year, which allowed her to spend time with her new son, who was wearing a tiny tuxedo, and her husband's family.