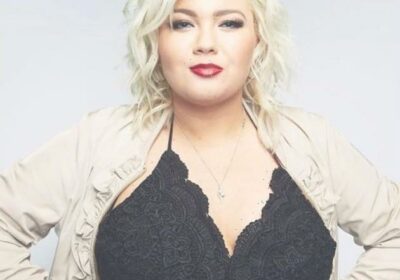 Recently, Amber Portwood was in court facing off against her ex, Andrew Glennon.

Almost three years after she attacked him in their home, he is seeking to move to another state, but Amber doesn’t want James that far away from her.

On social media, however, Amber is projecting a positive, confident image radiating self-love.

Also, a platinum blonde one.

“Platinum blondes have more fun,” she quipped in the caption.

“No, I didn’t dye my hair, just loving on myself,” Amber clarified. “What are your plans for today?”

So Amber isn’t sporting new hair anywhere but Instagram, making this a throwback pic, not an update.

Come to think of it, we do remember when Amber sported platinum blonde locks before.

(We might have said “just a few years ago,” but these examples that we have included are from more than half a decade ago)

Obviously, everyone has the right to dye their hair however they like.

Even so, not everyone can “pull off” a dramatic change in hair color.

Amber, however, absolutely kills it as a blonde, as we observed in years past.

We are all accustomed to seing her wearing her glasses, with her natural brown hair pulled back.

As a result, it is easy to forget that Amber isn’t just a beautiful woman, but an absolute bombshell wehn she wants to be.

Of course, forgetting Amber’s ability to stun people with jaw-dropping selfies isn’t just because we’re accustomed to seeing her dressed down.

It may have more to do with her behavioral history.

Whether she likes it or not, the world has not forgotten her domestic assaults — not against Gary Shirley, and not against Andrew Glennon.

Amber’s attack on Gary was filmed by MTV, with production seemingly thinking nothing of it and airing the footage of the crime like any other disagreement.

For many years, Amber appeared to have better behavior … until July of 2019, when she attacked Andrew and faced new charges.

It is because of that attack that she now finds herself battling in court to keep her youngest child, James, living near her.

Andrew is not from Indiana; he only moved there for Amber.

Obviously, when he did that, he had no idea that he would end up having first-hand knowledge of what machete marks look like on a door.

Similarly, everyone can understand why Andrew would like to leave Amber and Indiana behind and take his son with him to a new home.

It is up to the court to decide what is best for James, under the guidance of laws that do not always prioritize children as much as one would think. It’s a complicated matter.