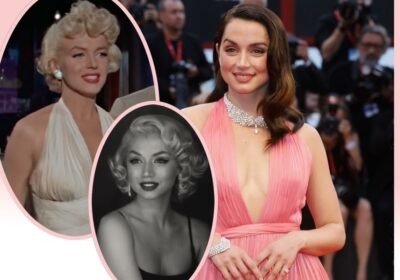 And you thought Don’t Worry Darling was the only film at Venice where the making-of would be more exciting than the actual movie!

Blonde also had its premiere at the Venice International Film Festival this week, and with it came a rather eventful press conference. No, there weren’t any cast members who spat on one another, but there was a g-g-g-ghost story! Yes, really!

The controversial biopic — which premieres on Netflix next Friday, September 16 — tells the story of Marilyn Monroe‘s rise and tragic fall. And it doesn’t pull any punches. Based on the Joyce Carol Oates book of the same name, Blonde was branded with a rare NC-17 rating, reportedly due to sexually explicit scenes and violence. Eesh.

Director Andrew Dominik told reporters they filmed in both the apartment where the future movie star — then known as Norma Jeane — lived with her mentally ill mother AND in the room where she died. Not only that, they began filming on August 4 of last year, the anniversary of Marilyn’s death.

Whether acting out her life in the same spaces she lived in was tempting fate or something else, who are we to say? But for star Ana de Armas, it really did bring the spirit of Marilyn out of hiding. She said they could all feel the star’s ghost haunting the set! The Knives Out alum told reporters:

“I truly believe that she was very close to us. She was with us”

Well, most of the time she felt approval. Sometimes Marilyn’s ghost let her displeasure be known, too! Ana admitted:

“I think she was happy. She would also throw things off the wall sometimes and get mad if she didn’t like something.”

Sorry, WHAT?! Like a straight up poltergeist?? Yowza! Ana offered:

“Maybe this sounds very mystical, but it is true. We all felt it.”

Dominik agreed they could all feel it:

“It definitely took on elements of being like a seance.”

Like we said, the movie about the movie sounds pretty damn intriguing, too, right? The ghost of a movie star haunting her own biopic? We’d watch that!

Of course, this isn’t the first time we’ve heard of a celebrity giving approval of a movie about them. Just ask Kristen Stewart!