Andrew Lloyd Webber, 72, will receive experimental coronavirus vaccine as part of Oxford trial as he says he’ll ‘do anything to prove theatres can re-open safely’

On Wednesday, the world-renowned composer, 72, took to social media and talked a about the motives behind his decision to take part.

He said: ‘I am excited that tomorrow I am going to be vaccinated for the Oxford Covid 19 trial. I’ll do anything to prove that theatres can re-open safely.’ 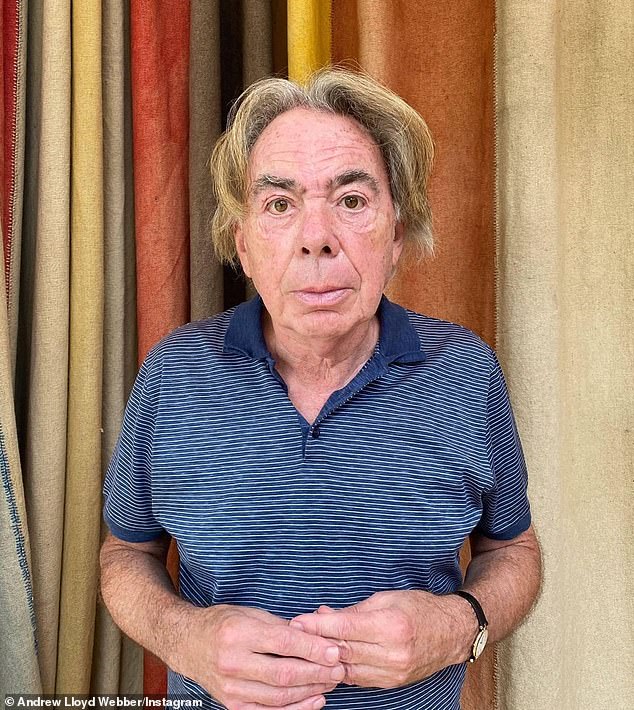 Walking the talk: Andrew Lloyd Webber, 72, has announced her will take part in a University of Oxford study that’s working towards find a vaccine for COVID-19

The University of Oxford and the drug company AstraZeneca are working on the development of the experimental vaccine called ChAdOx1 nCoV-19.

Thousands of people the UK, United States, Brazil and South Africa have volunteered to take part in clinical trials.

As recently as July 20, researchers announced the initial results of 1,077 people were promising, suggesting that the vaccine is both safe and triggers an immune response, according to the BBC. 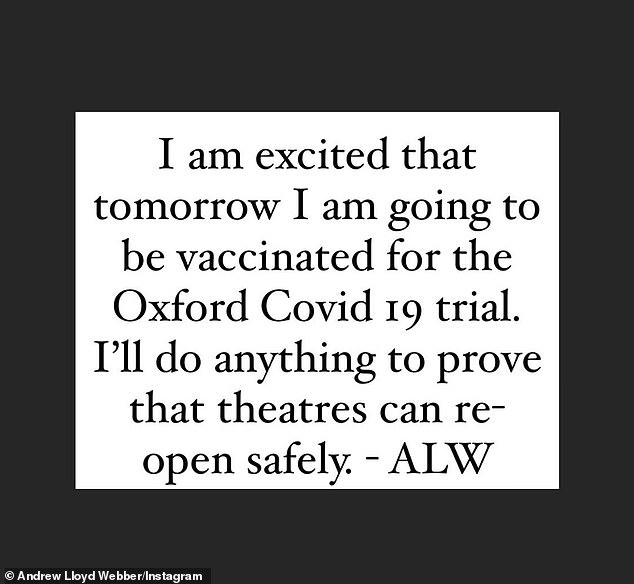 Race for the vaccine: The world-renowned composer took to social media and announced he’s taking part in an experimental study that working towards a vaccine 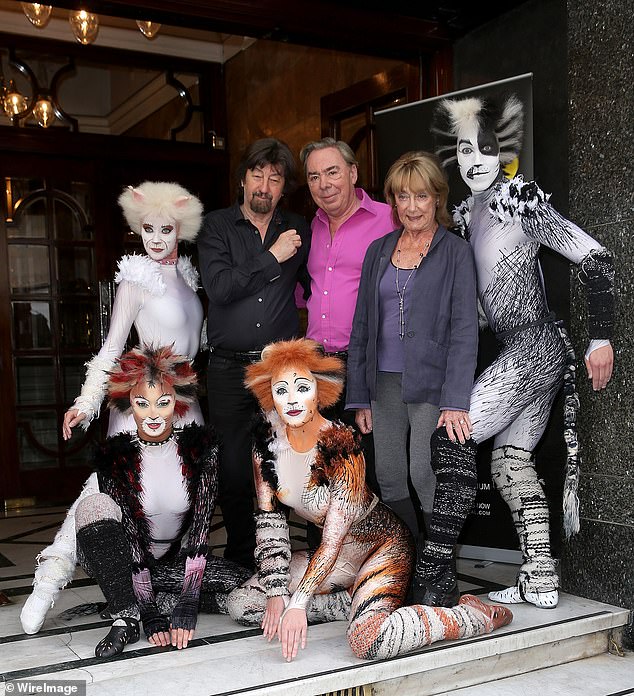 COVID-19 crisis: Webber, whose illustrious composing career includes Cats, will likely take part in the expansion of the study by University of Oxford and the drug company AstraZeneca

The next step in the study involves expanding the trial at a higher dose to thousands more people, which is likely where Webber will come into the play.

A slew of people took to Twitter to applaud the Cats composer’s willingness to get involved in finding a cure or treatment for the virus.

‘Bravo’, ‘Godspeed to you sir’ and ‘Thank you for your dedication’ where among the many sentiments from followers and fans.

Sir Sam Mendes says opening theatres with social distancing will be like ‘pouring money down the drain’.

Live indoor theatre and concerts can resume with the measures in place from the start of next month.

But the Bond filmmaker told BBC Radio 4’s Today programme that ‘any theatre has to run at 60 per cent, 70 per cent capacity to even break even’.

He added: ‘So to run at 30 per cent capacity… basically means pouring money down the drain, money which is not there.’

Sir Sam wants theatres to reopen without social distancing at the end of the year.

‘I’m not arguing that they should reopen with no social distancing now,’ he told Today.

‘But there has to be a ‘no earlier than’ date – my suggestion is that should be early December, which gives theatres time to plan.’

He said it would be ‘up to the audience on whether they want to take the risk’, adding that ‘at the moment there’s a risk just leaving the house…’

A fund set up by Sir Sam to help workers in the theatre industry has raised £1.6 million.

The director of films such as Skyfall and 1917, and plays including The Lehman Trilogy and Charlie And The Chocolate Factory, said the money will be used to support 1,600 freelancers.

However, almost 4,000 people have applied for support from the Theatre Artists Fund in one week.

Stars including Imelda Staunton, Benedict Cumberbatch, Eddie Redmayne, Colin Firth and Hugh Bonneville have donated to the fund, which was established with a £500,000 donation from streaming giant Netflix.

Sir Sam urged others to ‘come forward and show their support in order to help those in need’.

‘I really admire how you actually act in order to support what you believe. Most of the people only talk much but do little. Keep my fingers crossed that the vaccine works. Stay safe,’ another person tweeted out in support.

New York City’s Broadway and London’s West End are among the theater districts and venues that have been closed since March due to the pandemic.

In recent months, both Webber and his longtime producer Cameron Mackintosh have been very vocal about what they say is the UK government’s weak response to help the theater industry during the crisis.

When the pandemic hit, Mackintosh was forced to shut down all eight of his West End properties, which were running to full houses at the time.

Webber has been trialling measures at the London Palladium that could allow the theatre business to get back up and running after Phantom Of The Opera continued in South Korea with strict hygiene measures and no social distancing.

The composer hosted a pilot performance by Beverley Knight at the London Palladium, which had strict social distancing measures in place and was at 30 per cent capacity.

It is one of a number of events to gauge the viability of live entertainment amid the coronavirus pandemic.

Audience members were given an assigned arrival time and spread sparsely across the auditorium, with some rows left completely empty.

Speaking after the performance, Rebecca Kane Burton, chief executive of LW Theatres – the venue’s owner – said it was a ‘relief’ to reopen the doors.

She added: ‘I want to get this place back open, no social distancing.

‘And hopefully today has demonstrated that we run a tight ship, we know how to manage things, we have the right mitigations in place, and people just need this back in their lives.

‘Beverley needs it, the freelancers need it, the 290,000 in our industry – they need to get back into work. We are not a risk. We know how to do things properly. I’m excited.’ 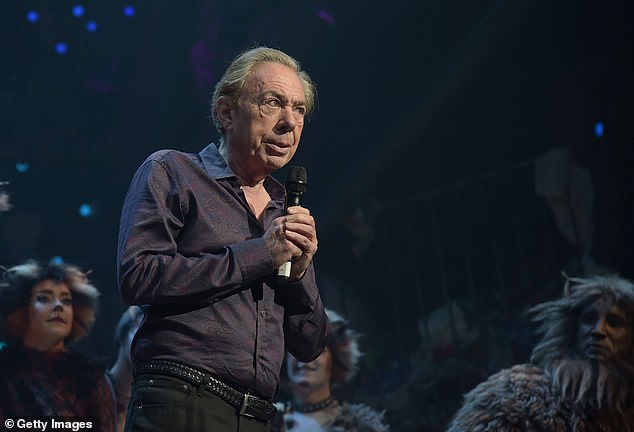 Taking a stand: Webber and his longtime producer Cameron Mackintosh have been very vocal about what they say is the UK government’s weak response to help the theater industry during the coronavirus crisis; he is pictured at Cats opening in NYC in July 2016

She added: ‘Hopefully today is the first step in showing the world, Public Health England, DCMS, whoever needs to see the evidence, we manage a tight ship.’

The composer told the Daily Telegraph that overseas buyers could take advantage of the precarious financial position that UK theatres find themselves in.

‘There are major buyers circling around who are not British and would like to own West End theatres,’ he said.

He said that during the recent sale of the Theatre Royal Haymarket the price was inflated by a Chinese bidder.

The theatre was bought for a reported £45 million, paid by the billionaire Sir Leonard Blavatnik in 2018.

This far exceeded other price tags for London theatres, including the Victoria Palace, which Cameron Mackintosh bought for about £26 million in 2014, and the Palace Theatre, in 2012.

He said the sector had received ‘no clarity’ from the Government about how its £1.57 billion support package for the arts will be distributed.

Lord Lloyd Webber warned that without urgent funds and a clear timeline for reopening, theatre owners will be forced to put the buildings up for sale.

Following government advice, theatres have been closed since 16 March to help slow the spread of Coronavirus, with many warning that they will go out of business in the coming months without support.

The National Theatre told their 400 members of casual staff that they will lose their jobs in a move it described as unavoidable due to the Covid-19 crisis. 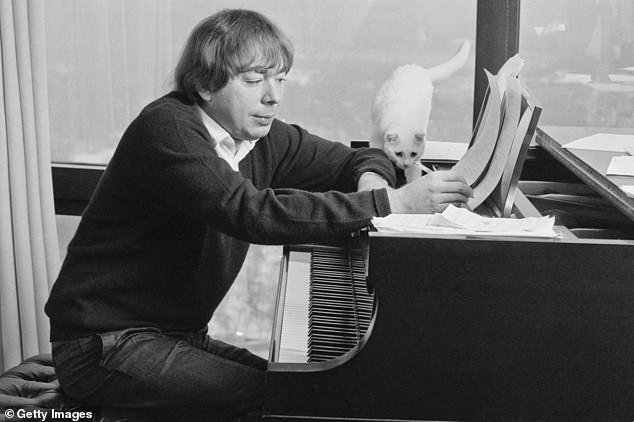