Attention to those of you wondering if Angelina Jolie and The Weeknd will become 2021’s newest unexpected couple: The two were once again seen at the same place at the same time. Instead of an intimate dinner, Angelina and The Weeknd went to a Mustafa the Poet concert, which admittedly sounds somewhat brow-raising, right? Only thing is…they weren’t actually seen together at the event.

“It was an intimate setting. Real spiritual,” an attendee told Us Weekly. “The Weeknd was very accessible; the other A-listers were accessible. Everyone was mingling before and after the concert. Angelina was with [two of her kids] and was seated next to the musician Akala.” Please note that the source didn’t see Angelina and The Weeknd chatting one-on-0ne and they arrived separately to the concert!

That doesn’t mean a chance interaction wasn’t possible though—“Angelina and The Weeknd probably spoke at some point, especially if they know each other,” the source added. “Everyone was mingling and they were in the same general area.” 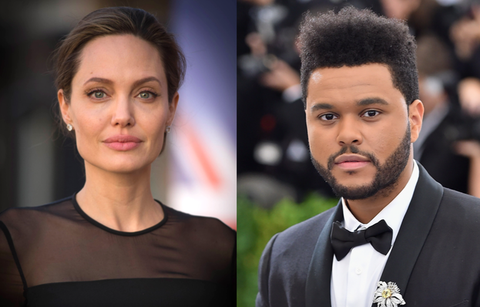 The news of Angelina and The Weeknd potentially hanging out again comes after the pair were seen chatting over a lengthy dinner date last week. “They’re clearly not trying to hide [the dinner date],” a source close to The Weeknd told the outlet. “He’s definitely focused on getting to the movie business. He has the new HBO series he’s starring in.”

“Angelina and The Weeknd had a business meeting,” an Us Weekly source elaborated at the time. “It had to do with their HBO shows. They got along great, but there is nothing romantic happening between the two of them.”

Good to know, glad to have that clarification, ready to ship them just in case their friendship evolves into something more!