Anne-Marie Corbett was seen for the first time since it was reported Ant McPartlin will give his estranged wife Lisa Armstrong £31 million in their divorce settlement.

The former PA, 44, couldn’t wipe the smile off her face as she took their two Maltipoo dogs, Milo and Bumble, for a walk in London on Wednesday.

Anne-Marie looked like a weight had been lifted off her shoulders as she walked around the common, after reports Ant, 44, is ‘delighted’ to have come to an agreement with his ex Lisa, 43, because it means he can ‘move on’. 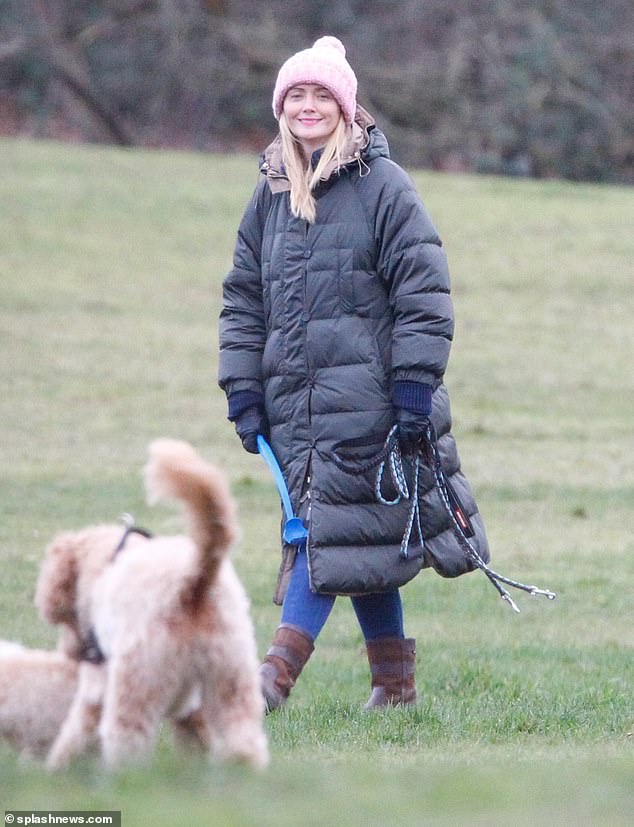 Moving on: Anne-Marie Corbett grinned as she was seen for the first time on Wednesday, since it was reported Ant McPartlin will give Lisa Armstrong £31 million in their divorce settlement

Anne-Marie appeared happy and relaxed as she flew solo for the outing and doted on their dogs, who played happily with a Cockapoo.

Ant’s beloved Labrador Hurley was not present on the walk, with reports emerging the presenter and his ex Lisa have finally reached an agreement to share joint custody of him.

Anne-Marie’s outing comes after Ant has allegedly agreed to Lisa more than half of his estimated £50 million fortune. 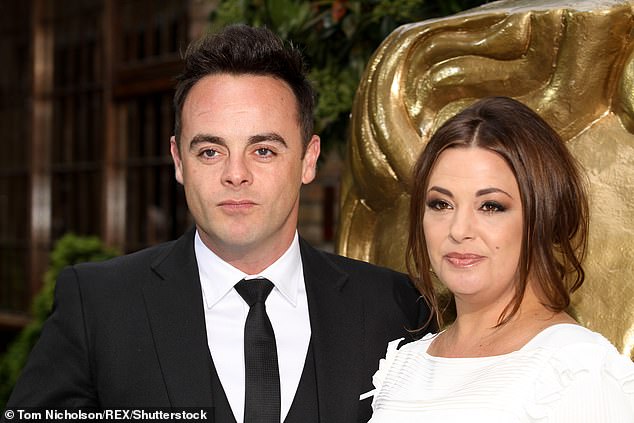 Pay out: Ant has allegedly agreed to give his estranged wife Lisa £31 million in their divorce settlement (pictured together in 2015) 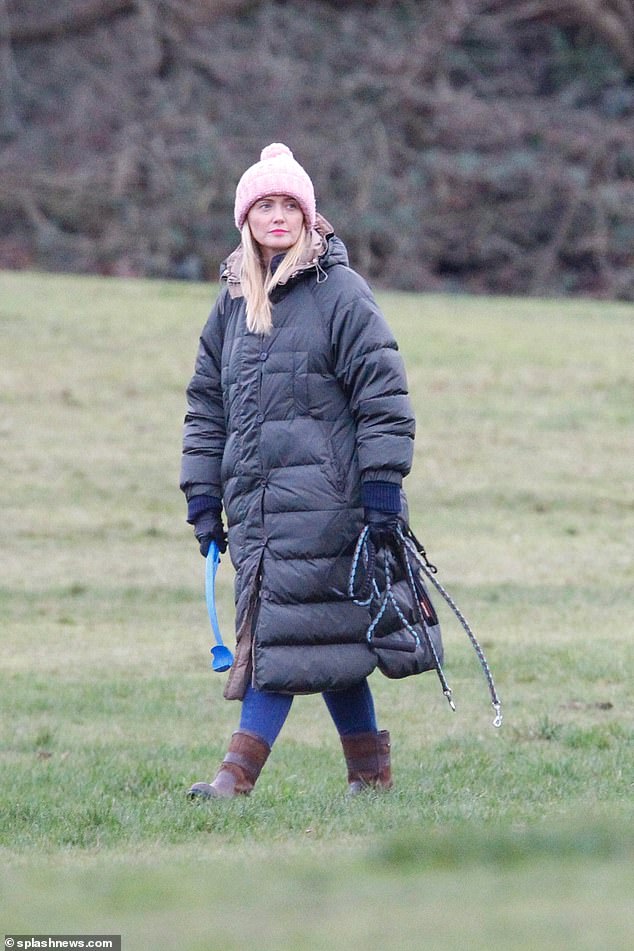 Agreement: Anne-Marie looked like a weight had been lifted off her shoulders, while Ant is said to be ‘delighted’ to have reached a settlement because he can ‘move on’ with his life 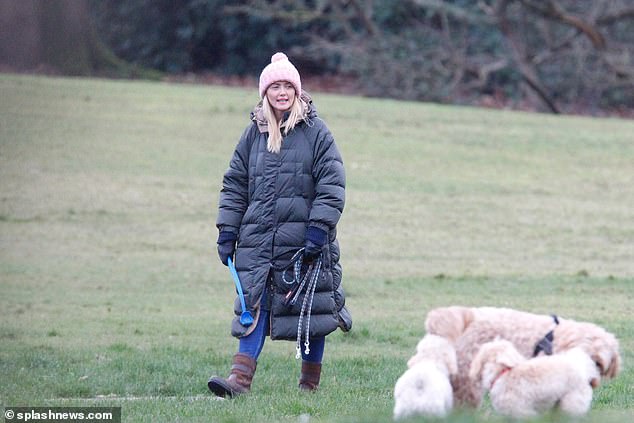 Alone time: The former PA flew solo for the outing with dogs Milo and Bumble, which comes after reports Ant, 44, has offered up half of his estimated £50m fortune to Lisa

According to The Sun, the I’m A Celebrity host is ‘delighted’ the case has come to an end as he can ‘move on’, two years after announcing their split.

A source close to both sides told the paper: ‘Ant and Lisa agreed to settle and sign their divorce agreement during a productive and civil meeting on Tuesday. 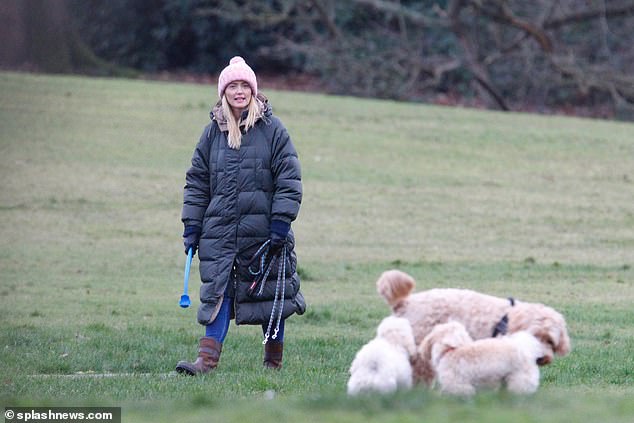 Settlement: Ant’s beloved Labrador Hurley was not present on the walk, with reports emerging the presenter and his ex Lisa have finally reached an agreement to share joint custody of him

‘Ant made a very generous settlement that works out to be more than half of everything that he has.

‘He is delighted because it means he can put what has been a very difficult chapter in his life behind him and move on.’

MailOnline has contacted representatives for Ant and Lisa for comment.

However, as the news broke, Lisa took to Twitter to deny the claims, posting: ‘Nope a load of nonsense AGAIN….’ 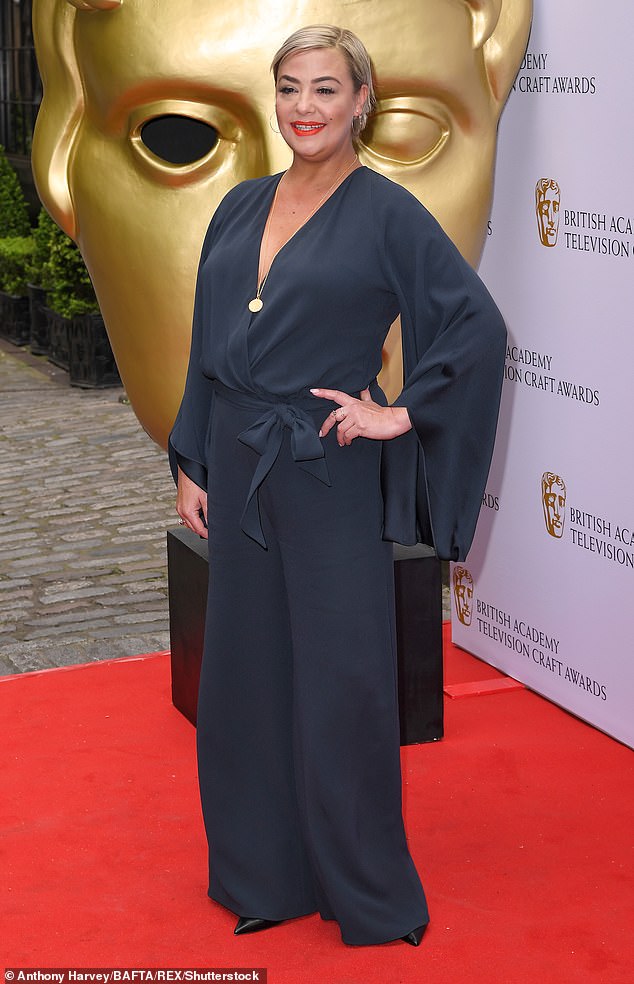 Battle: However, as the news broke, Lisa took to Twitter to deny the claims, posting: ‘Nope a load of nonsense AGAIN….’ (pictured in April, 2019) 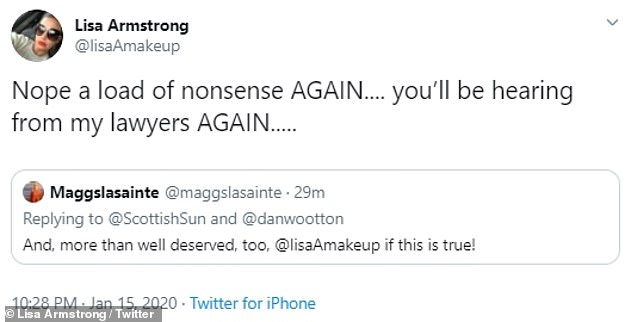 Denial: Lisa denied reports the couple have finally reached a divorce settlement on Twitter, calling it a ‘load of old nonsense’

Supportive fans: Lisa went on to like tweets stating ‘no amount of money’ would be compensation for her experience in recent months

She went to ‘like’ tweets which stated: ‘no amount of money could ever compensate for what this poor girl has had to endure’, and ‘Get what you can! You deserve it! Terrible treatment of you since you found out when we did! And with a so called friend! It’s heartbreaking behaviour’.

‘I bet the money means nothing in some respects, it certainly can’t buy the respect she deserves or make up for the sh***y spineless way he scurried off & tried to silence her.

The tweet continued: ‘Whatever the sum is I’m sure it will be put to much better use & I wish her all the best’; and ‘Why do people care what you get, no amount of money big or small can change the fact a heart was broken’. 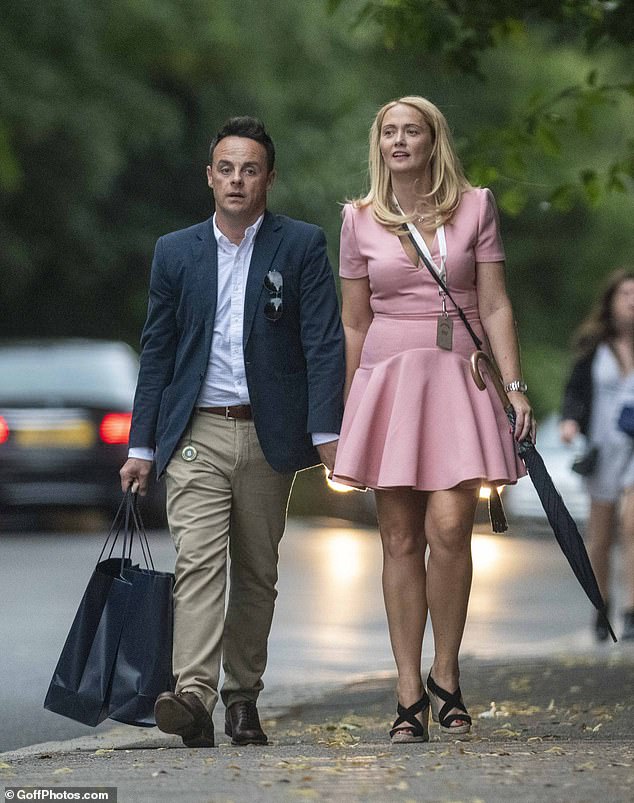 New love: Lisa has been vocal about how deeply hurt she was when Ant moved on so quickly with his former personal assistant, Anne-Marie (pictured together last July)

The news comes two months after friends of the pair told The Mail On Sunday that despite efforts by Ant to keep their split low-key, Lisa still wanted her day in court.

Lisa is understood to feel Ant ‘got away with a lot’ after their split in 2017.

A source close to the couple said: ‘Ant has been very generous in terms of the financial settlement but Lisa is totally the opposite of someone who is motivated by money.

‘She doesn’t care about that – she earns her own. But she has been so hurt by all of this.

‘What the general public and his fans don’t realise is that Ant’s decision to end the marriage came after years of Lisa trying to save him from himself.

‘There were at least three years when she was at her wits’ end and it was tough. Watching him move on was very, very difficult. Lisa is very much aware that a judge may not award her as much as Ant is offering but she doesn’t care.

‘She has suffered tremendously in all of this and she wants her day in court.’ 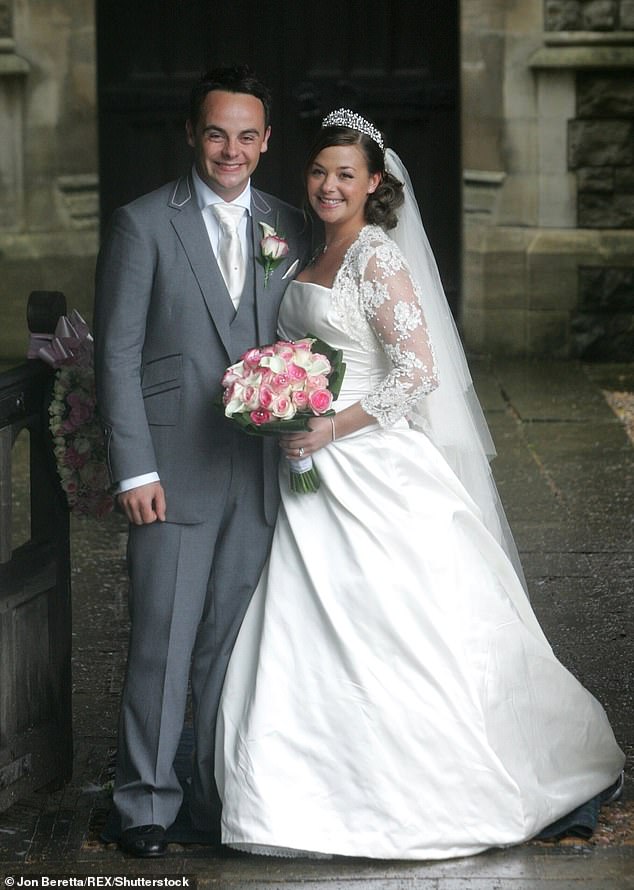 Happier times: The couple married in July 2006 and announced they were divorcing in January 2018. Their union legally came to an end during a 30-second hearing in October that year

Lisa, who hired Catherine Bedford, head of family law at legal firm Harbottle & Lewis, to represent her, is also said to have been distraught over a newspaper interview in which Ant told how he was ‘happier than ever’ with Anne-Marie.

The couple married in July 2006 and announced they were divorcing in January 2018.

Their union legally came to an end during a 30-second hearing in October that year, finalising 11 years of marriage.

During the hearing, Ant had to technically admit adultery with Anne-Marie as their relationship officially began while he and Lisa were still married.

A year before they split, the presenter entered rehab after struggling with a two-year addiction to super-strength painkillers following a knee operation in 2015. 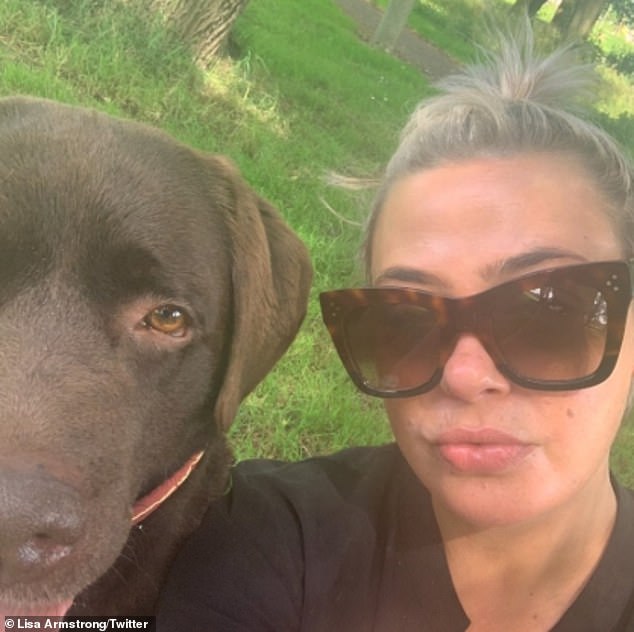 Shared custody: The former couple will share custody of their pet Labrador, Hurley, according to reports (pictured in July, 2019)

• The most striking element of this story is the alleged agreement Mr McPartlin will give ex-wife Lisa Armstrong £31 million in their divorce settlement, out of a pot that is reportedly thought to be £50 million

• The starting point in any financial settlement in divorce is a 50/50 division of the assets. However the judge must then consider if there are reasons to depart from equality.

• Reasons for departing from equality would be that one spouse brought significant assets into the marriage and/or acquired significant assets after separation. Ms Armstrong’s financial claims are therefore likely to be limited to the money amassed during the marriage, which includes any period that the couple cohabited prior to their marriage. Therefore if there is any deviation away from equality, it is more likely to be in Mr McPartlin’s favour than Ms Armstrong’s.

• The settlement will need to meet the couple’s needs, but in big money cases, where there are significant assets, this will not usually be a problem.

• The law does not favour the spouse who generated capital during a marriage when looking at how the assets should be divided.

• It is one of the myths around divorce that if one spouse has committed adultery, that spouse should be treated more harshly. The reasons for the breakdown of the marriage rarely have any impact on the financial settlement. The court will look at fairness and need.

• If, as is reported, the couple shared custody of their dog during their two years’ separation, then it is likely the judge will therefore be happy for that situation to continue.

Lisa has made it public how deeply hurt and betrayed she was when he moved on so quickly with his former personal assistant and her former friend, Anne-Marie.

She took to Twitter after reading an interview by Ant where he gushed about ‘his rock’ Anne-Marie and how he disagreed with Lisa’s decision to express her heartbreak on the social media platform.

Venting she put up with the ‘worst of him for years’, the make-up artist liked a slew of tweets saying she has been hurt enough and didn’t need to see Ant declaring his love to her former PA.

In November last year, Lisa hinted she is a ‘victim of a narcissist’ as her bitter £62million divorce raged on.

After reportedly refusing to sign a non-disclosure agreement which prevented her from discussing the marriage, the make-up artist liked a tweet that read: ‘A narcissist is always going to paint their victim as “crazy” mentally ill “delusional” imagining the abuse “psycho” emotional.

‘In fact, these are the top 3 projectory words that every narcissist uses. A victim of a narcissist however never refers to a narcissist this way.’

It was previously claimed Lisa reportedly refused to sign a non-disclosure agreement preventing her discussing her 12 year marriage to Ant.

According to The Sun, I’m A Celebrity presenter Ant asked Lisa to sign a gagging order to protect his reputation, and will not agree a final financial settlement if this does not happen.

However, Lisa has allegedly vowed she ‘won’t be silenced’ and rejected the NDA.

Ant’s solicitors are said to be sending regular legal letters to Lisa with his bill thought to have surpassed the £1.5 million mark.

The presenter’s solicitors are determined to keep details of the divorce private and stop proceedings reaching court – where it is feared information about the pair’s relationship will be brought into the public domain, according to reports. 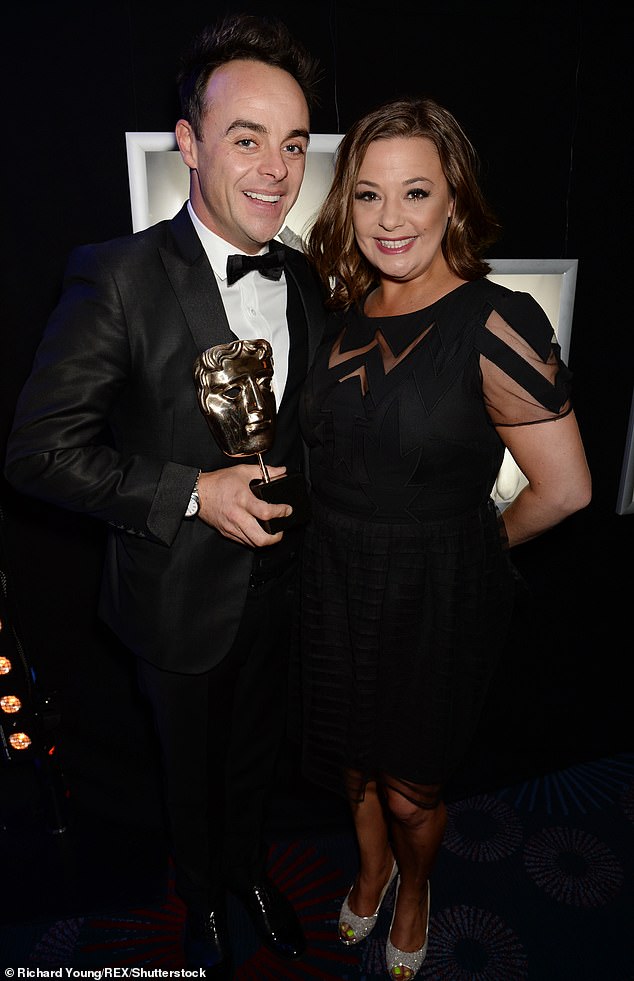 Adulterer: During the hearing, Ant had to technically admit adultery with Anne-Marie as their relationship officially began while he and Lisa were still married (pictured together in 2016)

A source told the website: ‘Lisa is an honest, loyal and decent human being. She isn’t interested in how much money she gets.

‘She won’t sign an NDA. As far as she’s concerned, he is welcome to his money.

‘It’s not about that for her. She’s appalled at the way she has been treated ever since they split up, by people she loved, trusted and called friends.’

A source close to Ant is also said to have told the website he has agreed to a second formal arbitration with Lisa.

They said he is not trying to pressure her to sign the NDA and that he will sign one too to stop the case going to court.

The Sun also claims Ant has not been allowed back into the West London home by Lisa – which she currently lives in – since he left rehab and he has been unable to pick up personal belongings. 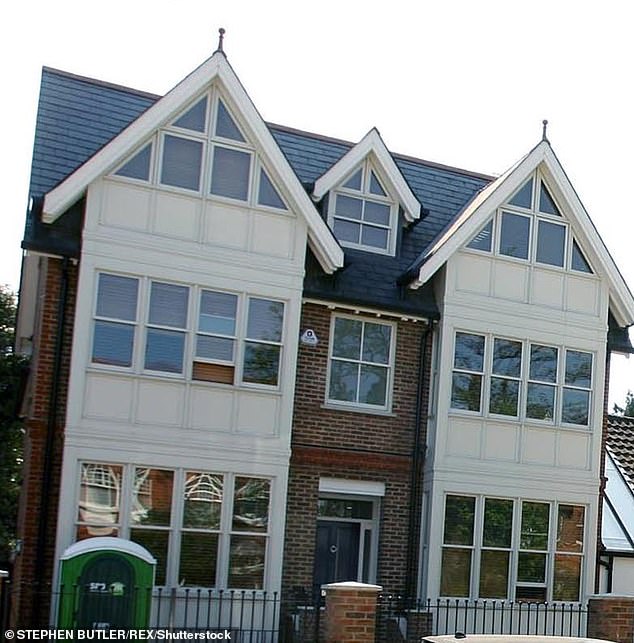 Keeping the house: It has also been claimed Lisa will keep the pair’s £5 million former marital home in West London 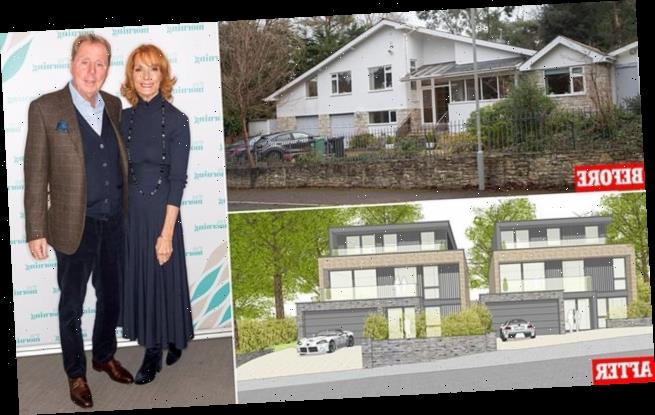