Spoiler Alert: Spoilers for Avengers: Infinity War follow. At your screening of Avengers: Infinity War, you probably had just barely settled into your seat when the official movie death toll began ticking off names minutes into the film. Heimdall, the guardian of Bifrost Bridge and a loyal subject to Thor and Loki’s father Odin, was one of the the first fatalities seen in Infinity War. His axing was so sudden and quick that it was easy to have forgotten about by the time the movie ended, but is Heimdall really dead?

The character wasn’t exactly high on viewers’ lists of concerns as Infinity War‘s release approached. Heimdall didn’t have much to do in the first two Thor films, but got a chance to play hero by the end of Thor: Ragnarok, when he helped guide surviving Asgardians to safety. By the time that movie ended, he and Thor decided to bring the remainder of their people to Earth, but when Infinity War began, we learned that Thanos and his own crew had intercepted their ship to steal the Space Stone from them.

In his quest to attain another Stone, Thanos killed Loki, and things weren’t looking great for Heimdall either. Before the villain could harm him, Heimdall manged to send the Hulk to Earth using his powers as gatekeeper. Honestly, the Avengers have a lot to thank Heimdall for, but Thanos quickly killing him after Hulk escaped assured that he would miss out on any thanks. Such is the life of a supporting Marvel character, I guess? To be fair, Thor swore to Thanos that he would avenge Heimdall, but at this point, Thor has plenty of other deaths to avenge for, too. 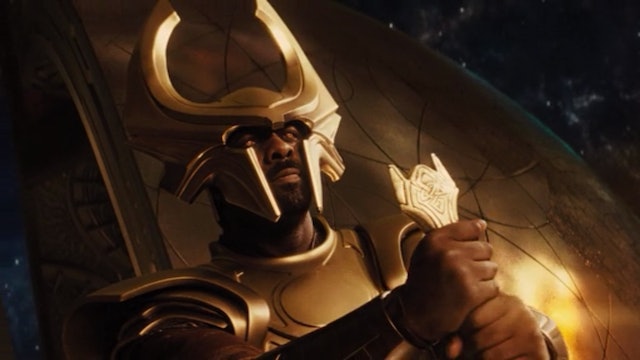 As opposed to the majority of characters vanishing at the end of the movie, Heimdall’s death was directly executed by Thanos, which doesn’t really leave much chance for survival. As Thor later said about Loki, he thought he was truly dead "this time," and I think it’s safe to say that the same goes from Heimdall.

However, with time travel likely playing a role in Avengers 4, anything could happen, and as behind-the-scenes photos from last fall’s filming have confirmed, many of the actors playing lost characters will still appear in the 2019 sequel. As far as we know, Idris Elba wasn’t one of those spotted actors, and the plot definitely wouldn’t suffer if Heimdall doesn’t appear. But again, thanks to time travel, there’s definitely an element of the unknown connected to Heimdall for the next film.

Heimdall’s death comes months after Elba admitted to Entertainment Weekly that he would like a bigger role in the Marvel world, saying:

Ooh, awkward. Well, let’s not rule out a future Heimdall prequel just yet.

By the end of Infinity War, almost all of the original Avengers were still alive, with Hawkeye’s status unclear but likely in good shape, seeing as his teammates survived. Thor’s intentions to honor Heimdall may be delayed until he and the other Avengers figure out how to save their friends, but he’ll definitely have his loyal friend in mind when fighting Thanos in Avengers 4.