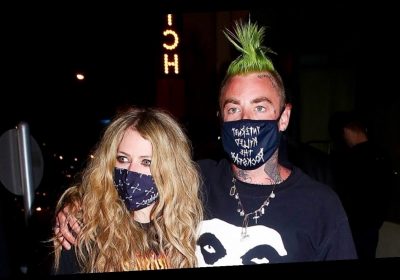 Avril Lavigne and Mod Sun are enjoying a night out!

The 33-year-old rapper wrapped his arms around the 36-year-old “Complicated” singer as they headed out after grabbing dinner at the Catch restaurant on Friday night (February 19) in West Hollywood, Calif.

Avril kept things cool in a black hoodie paired with red pants while Mod sported an all black outfit for their night out.

The day before, Avril and Mod were spotted sharing a kiss as they stepped out for the day in Malibu.

Avril and Mod first sparked dating rumors after they were spotted grabbing dinner together earlier this month in West Hollywood.

They then confirmed their relationship when they held hands and attended his album release party a few days ago. If you didn’t know, Avril and Mod collaborated on the song “Flames,” which is on the new album.

Mod even got a tattoo of Avril‘s name on his neck! Check it out here.