Home » Celebrities » BAZ BAMIGBOYE: Producer Darren Star is back with another sure-fire hit

BAZ BAMIGBOYE: Producer Darren Star is back with another sure-fire hit BAZ BAMIGBOYE: From Sex And The City to the City of Light… producer Darren Star is back with another sure-fire hit

Brains, not beauty, are a woman’s secret weapon, according to the television pioneer who created passion-fuelled escapism such as Sex And The City and Beverly Hills, 90210.

Darren Star, architect of some of the most talked about American programmes of the past three decades, was discussing his latest show, Emily In Paris, a series of ten, sumptuously produced half-hour episodes shot on location in the French capital.

Lily Collins plays Emily, an Insta-savvy, 20-something, luxury goods marketing executive catapulted from Chicago to work in her firm’s branch in Paris. ‘Emily’s a smart girl who happens to be attractive — and Lily Collins is beautiful,’ Star told me. 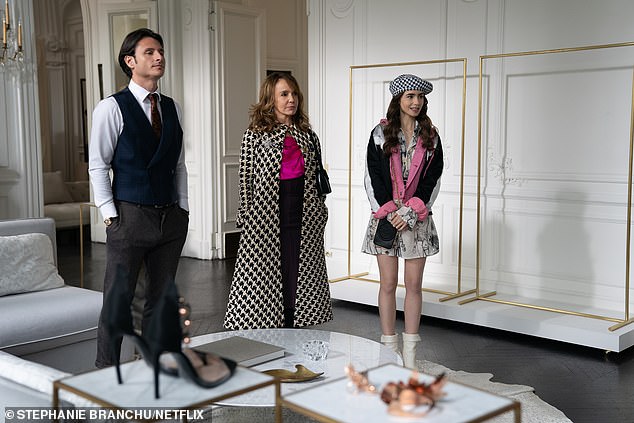 Darren Star, architect of some of the most talked about American programmes of the past three decades, was discussing his latest show, Emily In Paris 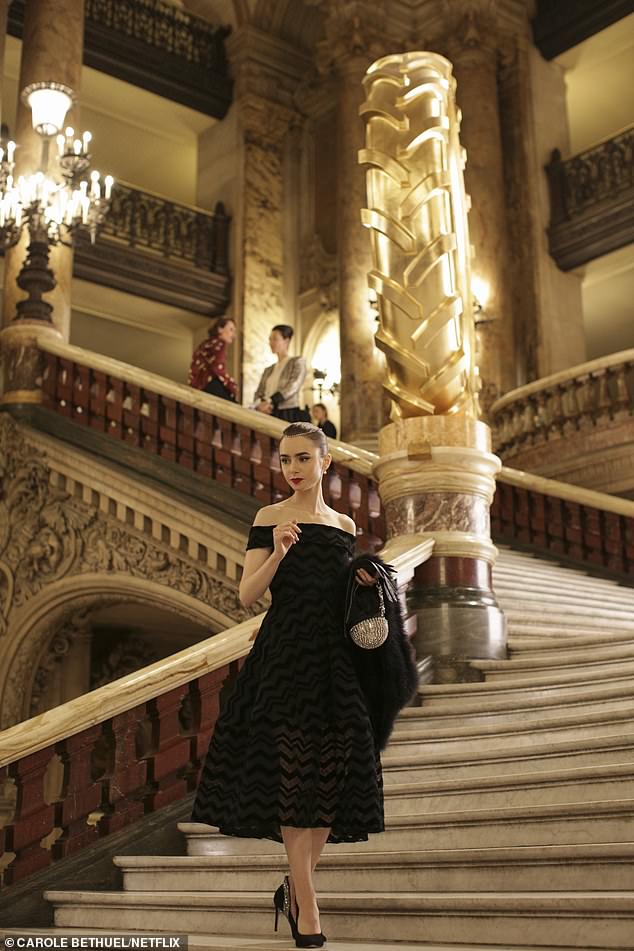 Lily Collins plays Emily, an Insta-savvy, 20-something, luxury goods marketing executive catapulted from Chicago to work in her firm’s branch in Paris

‘But beauty is not what she leads with. She leads with her intelligence. That’s her strength.’

Speaking to me from New York, Star added: ‘I’m not setting out to define femininity in any of these shows. It’s just writing the character that I think is of its time.

‘I do tend to write strong, independent women; and I think Lily’s Emily is an example of maybe where we’re at with some women in their 20s now.’ The show, which streams on Netflix from today, was shot with all the romantic comedy ambience of Funny Face or Sabrina, both of which were filmed in France and starred Audrey Hepburn (whom, from certain angles, Collins resembles). 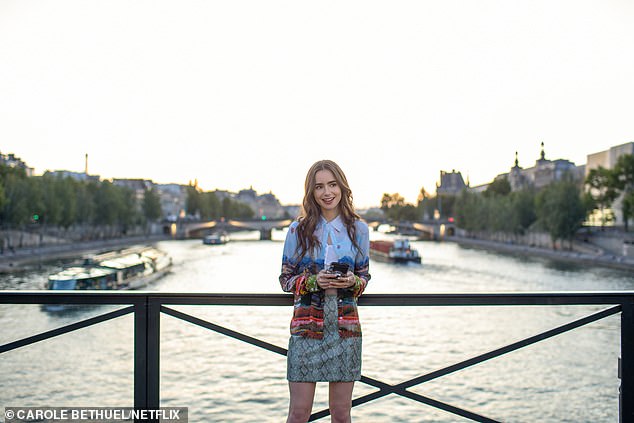 ‘Emily’s a smart girl who happens to be attractive — and Lily Collins is beautiful,’ Star told me 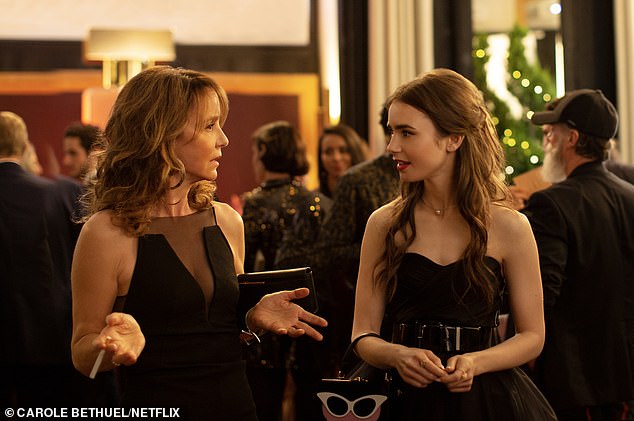 ‘But beauty is not what she leads with. She leads with her intelligence. That’s her strength’

Star, 59, hails from America’s Midwest, like his heroine (who’s a little culturally tone-deaf). But he’s a Francophile, who studied French in his youth and back-packed around France and Europe when he was 19. He also knows ‘some pretty formidable French women’, who informed the character of Emily’s nemesis Sylvie.

Sylvie runs the office of Savoir, where Emily has been transplanted, and she’s a Grade-A bitch. ‘Absolutely!’ Star agreed. ‘But she looks fantastic.’

As played by Philippine Leroy-Beaulieu, Sylvie is ultra-elegant in that effortless French way. (Sharp-eyed viewers will recognise 57-year-old Leroy-Beaulieu from another Netflix show, Call My Agent, in which she plays Catherine, the wife of philandering boss Mathias Barneville.)

‘She’s still got it,’ Star said admiringly of Sylvie, while observing that she also has ‘some vulnerability that she’s covering up in those beautiful clothes’. 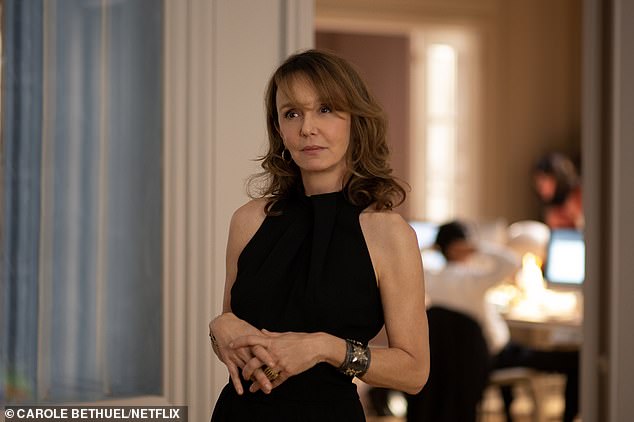 Sylvie runs the office of Savoir, where Emily has been transplanted, and she’s a Grade-A bitch. ‘Absolutely!’ Star agreed. ‘But she looks fantastic’

The outfits were chosen by Patricia Field, who also designed the couture confections worn by Sarah Jessica Parker and Kim Cattrall in Sex And The City (‘she’s a genius,’ Star said). ‘It’s entertaining just to look at the clothes,’ he said, ‘though sometimes I say: ‘Tone it down. I want the audience to hear the dialogue, too!’

Netflix should green-light a second season straight away; because one of the joys of Emily In Paris is that it’s like a trip to the City of Light at a time when none of us can actually get there.

Also, it would allow the actors, who all became friends (‘unlike any of the shows I’ve done before,’ Star quipped) to meet up again. The show’s creator insisted he has no secret formula for writing his iconic characters. ‘You are seducing an audience, so you want them to love your characters.

‘I don’t have to love everything they do, but I have to have a lot of affection.’

Carrie on screaming at Halloween!

West End star Linzi Hateley must have felt as if she’d come full circle. Thirty-three years after being offered the title role in Carrie, the musical version of Stephen King’s tale about a teenager who unleashes terrifying telekinetic powers on her high school tormentors, she was being asked to play the poor girl’s demented mother.

Carrie opened at the Royal Shakespeare Company’s home in Stratford-upon-Avon back in 1988, with Hateley starring alongside legendary Broadway soprano Barbara Cook, who had been enticed over to play Margaret White, Carrie’s Bible-toting single mother.

I covered the whole shebang. Carrie bypassed the West End and went straight to Broadway — though by that time, Cook had walked. Betty Buckley, another showbiz legend, replaced her.

The production was butchered by the critics and closed promptly. ‘It was a traumatic experience, to be given such a wonderful opportunity aged just 17; to be in Stratford, and then on Broadway, and for it to all go so humongously wrong,’ Hateley told me.

But not all her memories of Carrie are bad. She got to work with Cook and Buckley. Plus, Cameron Mackintosh saw her perform, and later cast her as Eponine in Les Miserables. ‘And all these years later, it’s become a cult. People adore it!’

Actors still sing numbers from Carrie at auditions. One popular choice is When There’s No One; written after rehearsals had begun by the team of Michael Gore and Dean Pitchford. ‘They hadn’t got the number they needed for Barbara, and one day Michael and Dean walked in and said: “What do you think of this?”’

Hateley will perform When There’s No One for the second, Halloween-themed episode of the new Theatre Channel, which launches today. It aims to offer viewers a front-row, West End experience from the comfort of home. A £12 ticket allows you to watch each 30-minute episode as often as you like. The first one, available now, features Jenna Russell and Carrie Hope Fletcher.

The Halloween special (out on October 30) will, besides Hateley, also showcase Josh Piterman, singing Confrontation from Jekyll & Hyde; and Bradley Jaden and Sophie Isaacs, performing Life After Life from Dracula. Adam Blanshay, who produces the shows, said episodes are filmed at the Theatre Café in London’s West End. They are directed by Bill Deamer and filmed by Ben Hewis, with full production values.