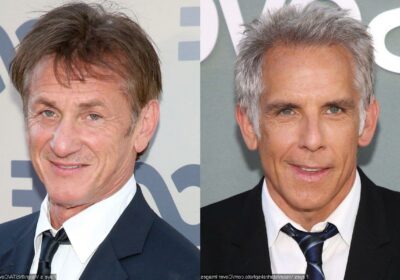 The two actors are on a list of 25 Americans who are now barred from entering the country due to their support for Ukraine amid President Vladimir Putin’s invasion of the country.

AceShowbiz –Ben Stiller and Sean Penn have been permanently banned from Russia. The two actors are on a list of 25 Americans who are now barred from entering the country due to their support for Ukraine amid President Vladimir Putin’s invasion of the country.

In a statement, Russia’s Foreign Ministry revealed the “stop list” and confirmed “a ban on entry into the Russian Federation on a permanent basis.” It added, “The hostile actions of the American authorities, which continue to follow a Russophobic course, destroying bilateral ties and escalating confrontation between Russia and the United States, will continue to be resolutely rebuffed.”

The list now includes over 1,000 names, with other people added in the latest announcement including U.S. Secretary of Commerce Gina Raimondo, and Senators Mark Kelly, Michael Rounds, Krysten Sinema, Kevin Cramer, Rick Scott and Pat Toomey. Penn has been vocal with his support of Ukraine, and travelled to the country early on in the conflict to film a documentary for Vice.

Meanwhile, back in June Stiller was in Ukraine on a UN Refugee Agency visit. He wrote on Twitter at the time, “It was an honour to meet President @ZelenskyyUa on #WorldRefugeeDay as part of my visit with UNHCR @Refugees to stand in solidarity with people forced to flee in Ukraine and worldwide, and bring more attention to the humanitarian situation. @Refugees #WithRefugees (sic)”

He visited Ukrainian refugees at the Polish border, and shared his experience on social media. He noted that millions of people “have been forced to flee their homes” since the start of the war with Russia. Stiller added, “I’m here to learn, to share stories that illustrate the human impact of war and to amplify calls for solidarity. I hope you’ll follow along and share your own messages of support, for people who have fled their homes in Ukraine and for people who have been forced to flee all over the world.”