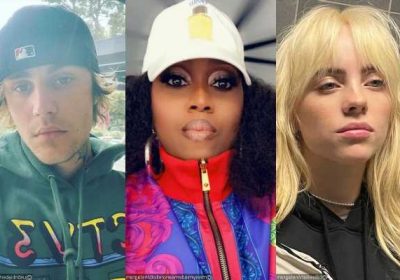 AceShowbiz –Billie Eilish was left stunned during an Ask a Legend Vogue video interview when stars like Justin Bieber, Missy Elliott and Halle Berry fired off questions to her.

The Spice Girls star Melanie C (a.k.a. Mel C) and “Killing Eve” actress Jodie Comer were also among the 23 celebrities who posed questions to Billie, but it was rapper Elliott’s query about her videos that really knocked the 19-year-old out.

Meanwhile, Bieber asked the teen if she would rather have fresh socks or fresh sheets, prompting Eilish to confess she hates the idea of dirty sheets or dirty socks, and the singer’s “crush” Comer asked Billie for her go-to karaoke song, which is anything by H.E.R. or Chief Keef.

Even the “Bad Guy” singer’s brother FINNEAS got in on the action, asking Eilish if there were any shows she has played that she has no recollection of.

Billie explained there are several, adding she often recalls gigs based on what she was wearing.

British grime rapper Stormzy, Vince Staples, Hailey Baldwin, Avril Lavigne, Melissa McCarthy, Orlando Bloom, Viola Davis and Arlo Parks were also among the celebrity fans with burning questions, as was filmmaker Tim Burton who asked why everyone thinks Billie is from another planet.

“People think I’m like a demon, a lot of them,” she replied. “That’s pretty crazy. I mean I’m honored.”

And Mel C asked her for a life-changing moment, prompting Eilish to recall her big nights at the 2019 and 2020 Grammys, and performing James Bond theme “No Time to Die” at the 2020 Oscars.