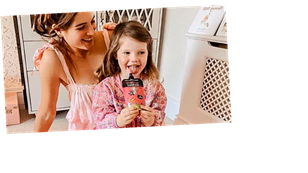 Binky Felstead has shared an adorable throwback childhood snap – and she looks exactly like her three year old daughter India.

The former Made In Chelsea star, 30, shared the picture on Instagram Stories and wrote: “First time I’ve seen this pic of me!!” alongside two laughing face emojis.

Comparing herself to the tot, who she shares with ex-boyfriend Josh ‘JP’ Patterson, she added: “So much like India no?”

A young Binky is utterly adorable in the photograph with short dark hair.

Earlier this month, she announced they’re having a baby boy in a sweet gender reveal video.

In the clip, Binky, Max and India can be seen gathered around a large black balloon which has the words ‘boy or girl’ etched on in silver lettering.

The song Somewhere Over the Rainbow is playing as Binky is handed a knife to pop the balloon and reveal blue confetti.

As the star shared the clip with her 1.4million followers she wrote in the caption: “ITS A ………”

Fans then took to the comments to congratulate the family.

One wrote: “Ahhhh Binky!!!! A little boy congratulations!! And here was me convinced you were having another girl!!!”

While a fourth joked: “Congratulations ! (fyi boy's are easier!)”.

Binky previously announced her pregnancy news on her Instagram account with an adorable picture showing off the first glimpse of her blossoming baby bump.

In the snap, Binky can be seen wearing a gorgeous pink gown as she smiles at daughter India, who is holding her scan pictures while Max smiles into the camera.

“BIG SISTER ALERT” she wrote alongside.

“We are so thankful and excited that our family will be growing in 2021. India gets her new title of ‘Big Sister’… which she’s already very proud of!”

“2020 has been a real personal rollercoaster with some huge ups and some lows.

Max took to his own social media for the sweet announcement, posting an adorable picture of India holding up the scans of her little sibling.

He wrote: “I’m super excited that this little nutter is going to be a big sister in 2021.”