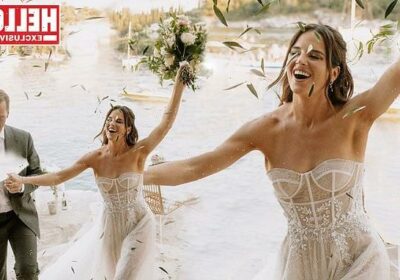 Binky Felstead looked sensational in a dreamy strapless lace wedding dress as she married husband Max Darnton for a second time in a stunning ceremony in Corfu.

The pair celebrated their love at the Greek home of author Lawrence Durrell and his wife Nancy.

The former Made In Chelsea star, 32, described the location of the white home at Kalami on the island as a ‘dream come true’ as she used to watch the ITV drama The Durrells and thought it looked like ‘heaven’.

Binky and her businessman beau, 32, originally tied the knot in a civil ceremony at Chelsea Old Town Hall in July 2021, but the pair were forced to put their plans for a larger overseas celebration on hold. 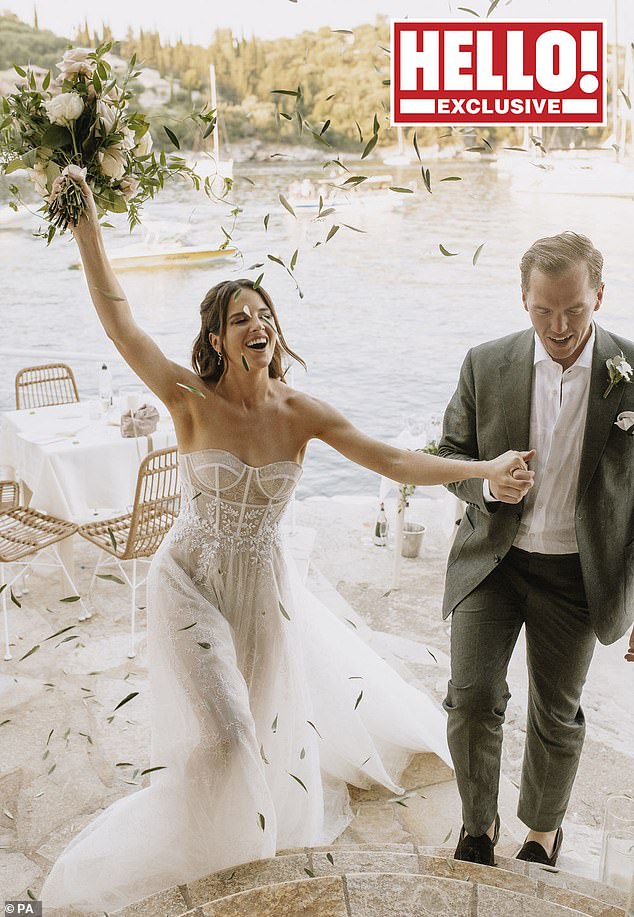 Loved up: Binky Felstead looked sensational in a dreamy lace wedding dress as she married husband Max Darnton for a second time in a stunning ceremony in Corfu

Their second celebration, which came nearly a year after their first wedding, was part of a week of festivities during the Greek getaway.

Among the 100 family and friends in attendance were the couple’s son Wolfie, 13 months, and his big sister India, five, who Binky shares with her ex-partner and former Made In Chelsea co-star Josh Patterson, 32.

Speaking about the special wedding venue, she told Hello! magazine: ‘I used to watch The Durrells on TV and I remember saying: “I really want to go there – it looks like heaven”.

‘Having it as our wedding venue was a dream come true.’

The tulle-esque fabric accentuated the stunner’s slender physique as she held onto a bouquet of of white flowers. 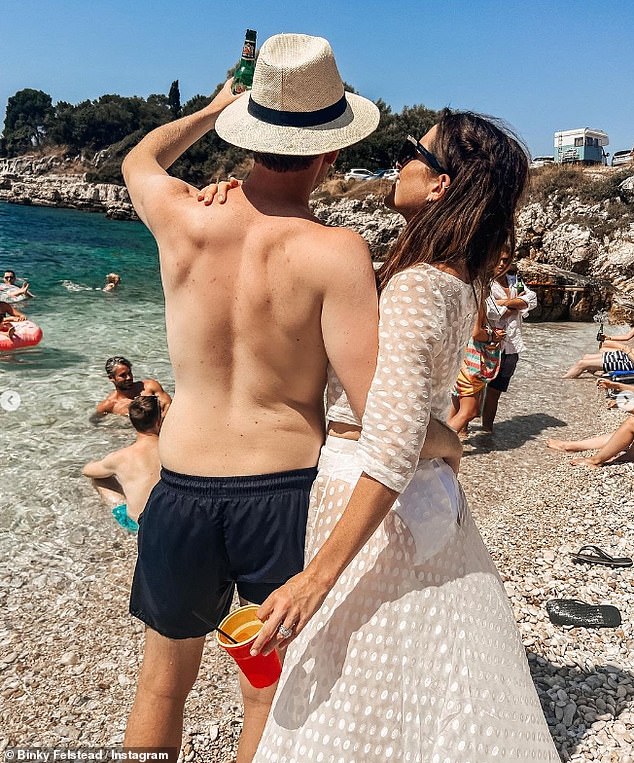 Newlyweds: Binky Felstead looked sensational as she shared her first Instagram snaps with husband Max Fredrik Darnton last weel since tying the knot for a second time in Corfu

The star wore her chestnut tresses down, opting for an elegant make-up look that accentuated her eyes with dark shadow.

She said of her wedding gown: ‘I felt confident and very “me” in it.

‘When I first tried it on, I had already got what I thought was The Dress, but I hadn’t felt the feeling I felt with this dress, with any of the others.’

Max added he thought that she had looked ‘absolutely incredible’ for the special day.

The businessman also revealed that during the dinner he had shared a speech where he spoke about how he had married two people.

He explained: ‘I said I married Binks but I also married into India’s life. 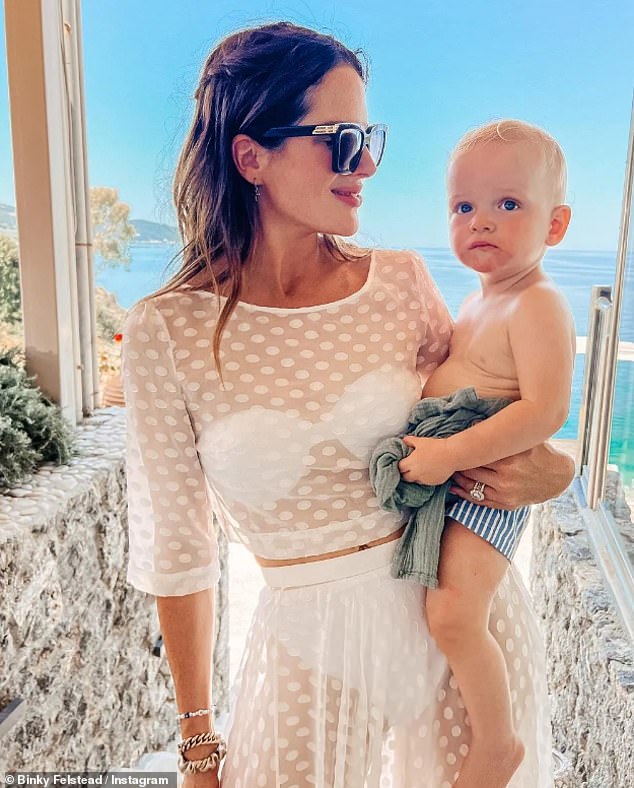 Fun in the sun: Following her Grecian ceremony, Binky took to Instagram to share snaps from a post-wedding beach party, which had been attended by their close friends and family

‘As I was saying that, India trotted down and stood next to me. It was the most perfect timing.

‘She gave me a hug and said hello to everyone on the microphone – I think she enjoyed the attention.’

The couple are now going to enjoy a family getaway to the South of France before their daughter India goes back to school in September.

Binky said: ‘I think it’s important to plan something lovely to do after the wedding to beat those post-wedding blues.’ 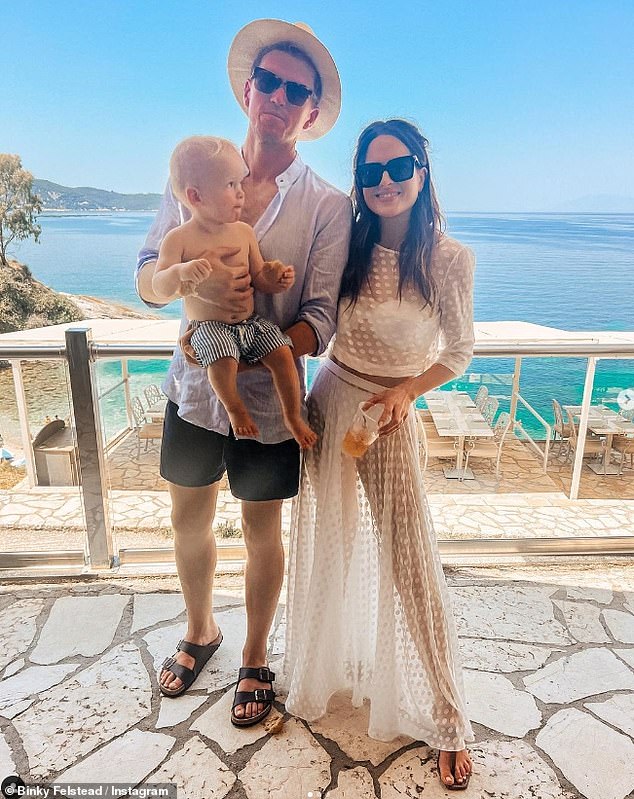 Family fun: Binky was a vision of beauty for the bash as she donned a bridal white bandeau bikini and sheer polka dot co-ord to pose with Max and their son Wolfie, 13 months

Last week Binky looked sensational as she shared her first Instagram snaps since tying the knot for a second time in Corfu.

Following her Grecian ceremony, Binky took to Instagram to share snaps from a post-wedding beach party, which had been attended by their close friends and family.

Binky was a vision of beauty for the bash as she donned a bridal white bandeau bikini that she layered beneath a sheer polka dot Charlie Brear co-ord. 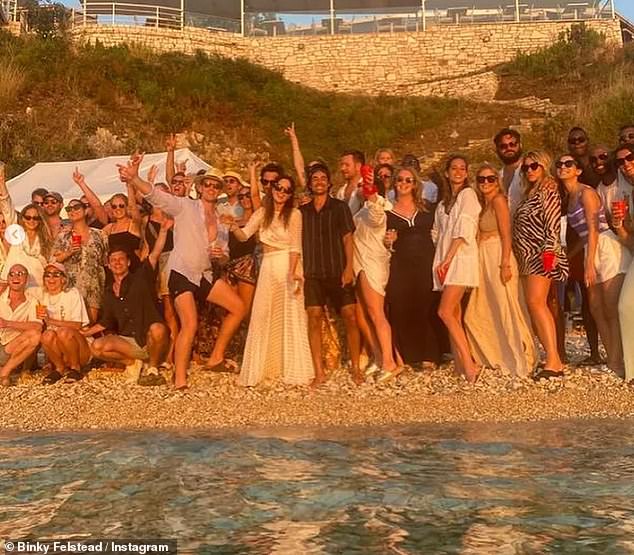 Fun in the sun: She captioned the series of snaps: ‘Post wedding beach party – what a day!’ and ‘Sundowners’

The mother-of-two looked every inch the proud newlywed as she shared snaps puckering up to her husband for a kiss – who was clad in a pair of navy swimming trunks and a cream trilby hat.

She captioned the series of snaps: ‘Post wedding beach party – what a day!’ and ‘Sundowners’.

The pair were legally wed during an intimate civil ceremony at Chelsea Old Town Hall on July 23 in 2021 but had always planned on throwing a big Grecian bash for their loved ones. 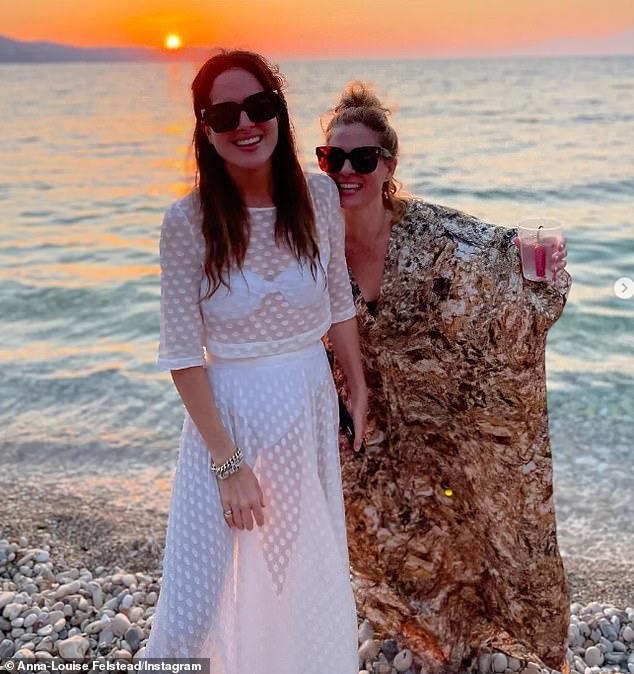 Family fun: Binky’s elder sister Anna-Louise Felstead shared snaps from the beach party as she gushed over their ‘gorgeous day’

Announcing the news in Hello! Magazine, Binky said: ‘We wanted to just have a week-long party so we thought we’d get out of the country and go somewhere to celebrate with our friends and some of our family…

‘Corfu is stunning. We’ve been there a few times and it’s a really special place for us.’

Max previously told the publication they had hired a ‘big boat to sail around the coves’ and have also secured a cliffside venue for their wedding.

He added that they’ve rented a private beach where they can enjoy a meal after the ceremony with their loved ones.

They also revealed they planned to have a BBQ on the beach and go snorkelling.

Unfortunately, Binky’s mother Jane was unable to attend the ceremony abroad after suffering with a flare up amid her battle with multiple sclerosis. 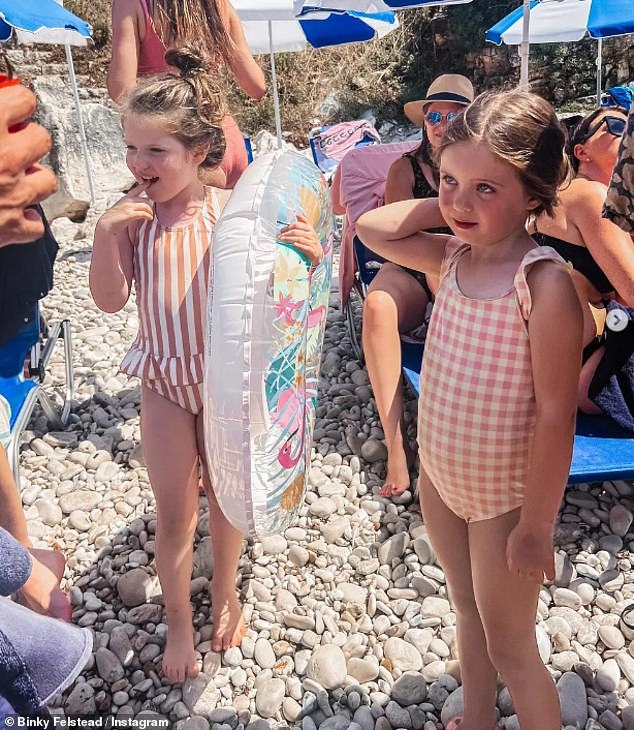 Sweet: Binky’s daughter India, three, who she shares with ex-boyfriend Joshua JP Patterson was seen playing with her cousin 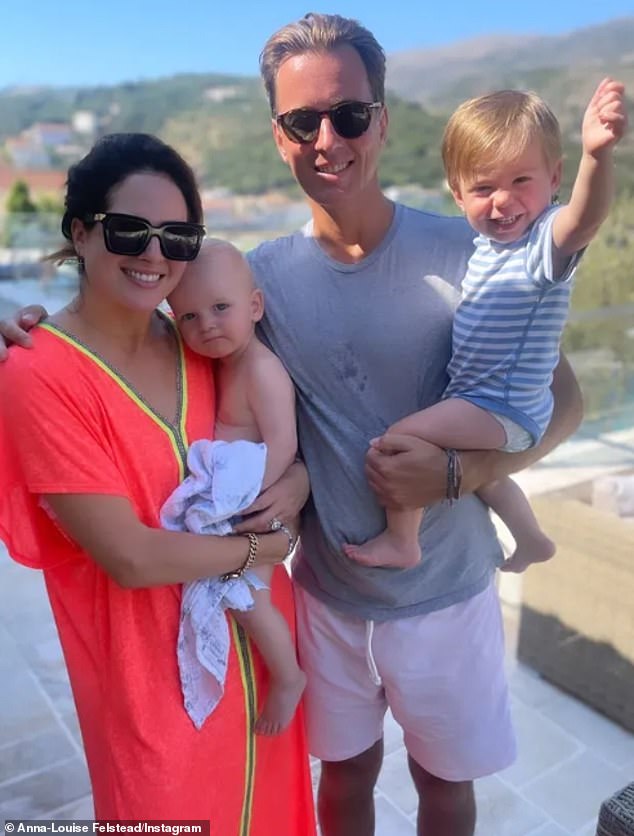 Adorable: Binky and her brother Ollie posed for sweet snaps with their little ones 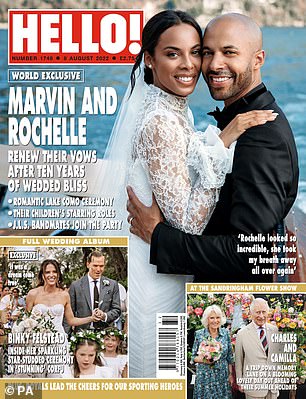 Happy couple: The full feature can be found in this week’s edition of Hello! – out now

While she was unable to attend the nuptials in person, she ensured that she felt part of the big day while celebrating with a friend at home in London.

Sharing a selfie with her friend Tracey, Jane penned: ‘OMG! I’m so glad Binky doesn’t get married every day, although It feels like she does – I’m exhausted just trying to make Zoom work… it didn’t!

‘Wonderful friends so determined that I shouldn’t be sad or alone have gone out of their way to keep me entertained and happy!

‘Tracey, pictured here has been my dearest friend for years. She was coming to the wedding with me as my plus one ( in a very non sexual way natch) and i now

‘I feel huge guilt is it cost her fortune – flights villa etc – and still she rocked up yesterday full of the joys of spring carrying champagne and chocolates.

‘She then spent the day with me drinking merrily at @brasserieblanc Making it home just in time to get the gist of the wedding from my phone – and although it all looked wonderful, I know I couldn’t have made it!

‘So now I’m with Flossie, alone in the garden. Praying for rain as i haven’t the energy to water. Sipping away at the remainder of the bottle I opened to cheer myself up

‘Great realisation hit me sitting here, when I realised that the day I was really dreading was almost over, and all I feel – and have felt, was a genuine love and happiness for them both – And a massive relief but I can now take my clothes off, have a Magnum – and watch catch up! [sic]’.

Max and Binky revealed they were engaged to be married after 19 months of dating in a sweet Instagram post shared in September 2020 after meeting at Soho Farmhouse.

They welcomed their first child together in June 2021 – a baby boy named Wolfie. 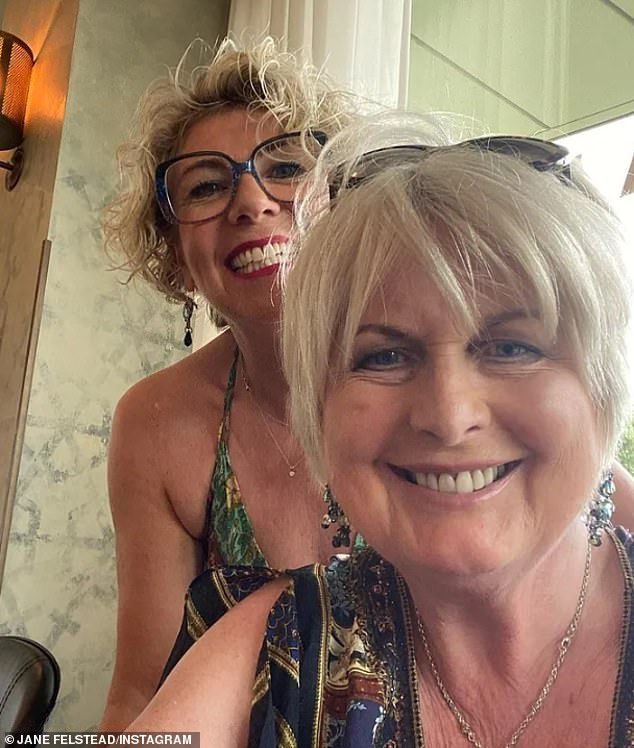 Upsetting: Unfortunately, Binky’s mother Jane was unable to attend the ceremony abroad after suffering with a flare up amid her battle with multiple sclerosis 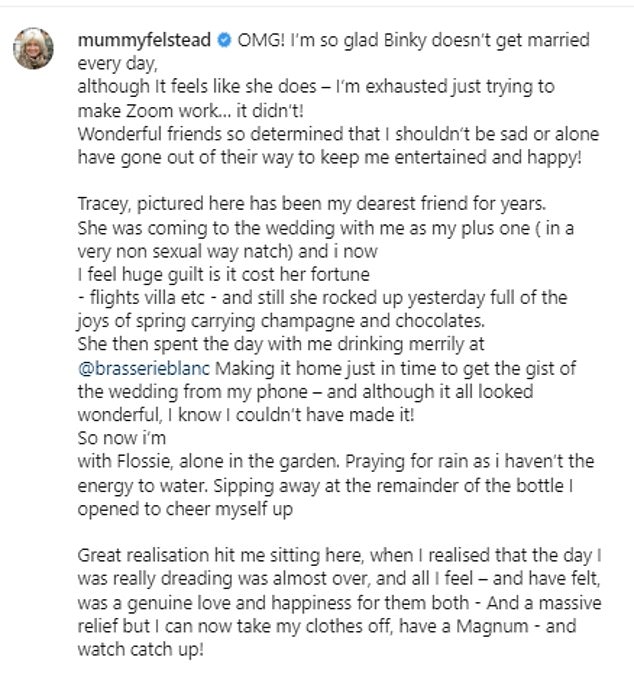 Celebrations: While she was unable to attend the nuptials in person, she ensured that she felt part of the big day while celebrating with a friend at home in London