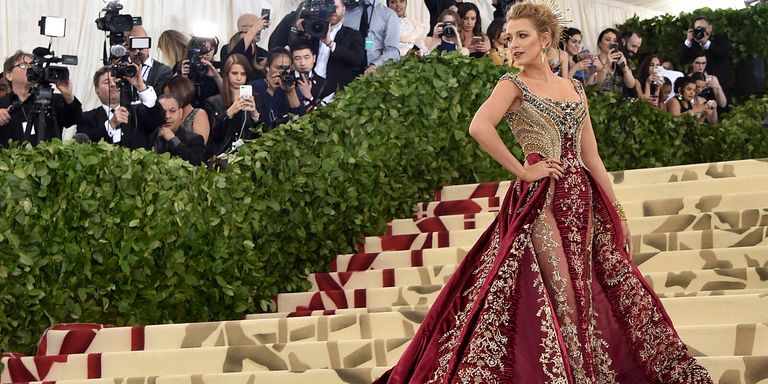 Back in March, Blake Lively revealed she had already picked out her gown for the 2018 Met Gala—and that it took more than 600 hours to make. Tonight, we finally got to see the much-teased dress come to life on the red carpet–and unsurprisingly, it did not disappoint.

Created by Versace, the actress’ gown was an incredibly ornate ruby and gold design that featured some pretty intricate and extensive beading (hence, the 600 hours it took to hand-create).

The look perfectly blended the Met Gala’s “Heavenly Bodies: Fashion and the Catholic Imagination” theme with a little bit of Game of Thrones vibes. At the top, the dress featured a jewel-encrusted gold corset that showed off Lively’s figure perfectly. Meanwhile, the train of the gown was a deep ruby red with two sheer panels and gold embroidering.

Topping off the already dramatic look, Lively wore a spiked headpiece that made her look like an actual angel.

The only thing missing from the actress’s winning Met Gala look this year was, of course, her husband, Ryan Reynolds, who was notably absent at this year’s event. Regardless, Blake once again knocked her red carpet look out of the church. Praise.