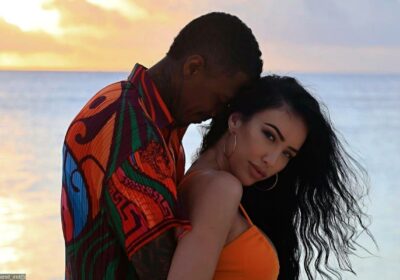 The model, who is currently pregnant with the ‘Masked Singer’ host’s eighth child, confides that she got ‘ripped apart’ for her decision to start a family with the rapper.

AceShowbiz – Bre Tiesi has defended her relationship with Nick Cannon amid criticism regarding the fact that he already has seven children with four different women. Setting things straight once and for all, the model, who is currently pregnant with the multi-talented star’s eighth child, insisted that having a baby with him is “not a cult.”

Bre clarified Nick’s relationship with his baby mamas during an appearance on “The Know for Sure” podcast on Tuesday, June 21. The 31-year-old admitted that she got “ripped apart” for her decision to start a family with “The Masked Singer” host.

When co-hosts B. Simone and Megan Brooks asked Bre to define her relationship with Nick, she answered, “It’s not necessarily anything,” though she noted that her “needs are met” by what they have together.

When the hosts asked if they were practicing polygamy, Bre also seemed to avoid a direct answer. “This is just us,” she said. “This is our relationship and what you do outside of that is what you do outside of that,” she elaborated about Nick’s relationship with his other baby mamas, before adding, “Everything is respectful, everything is honest.”

While Bre declared that she’ll be “happy” should Nick decide to settle down and get married one day, she admitted it’s sometimes “hard” to know he’s intimate with other women, though she tries not to compare herself to them. “I love him,” she added.

Bre also acknowledged that she didn’t currently speak to any of the women Nick shares children with, but she had “every intention” of making sure her son has a strong relationship with his half-siblings. “If at any point any one of us is unhappy with the situation, we can do whatever we want to do,” she further shared. “I know I can do that if I’m not getting my needs met or want something else. I could change my mind.”