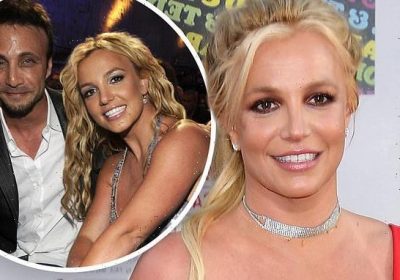 ‘It has been over 2 1/2 years since Britney and I last communicated, at which time she informed me she wanted to take an indefinite work hiatus,’ Rudolph, 57, said in a statement to a Los Angeles court, according to Deadline, which reviewed the docs.

‘Earlier today, I became aware that Britney had been voicing her intention to officially retire,’ he wrote. ‘As her manager, I believe it is in Britney’s best interest for me to resign from her team as my professional services are no longer needed.’ 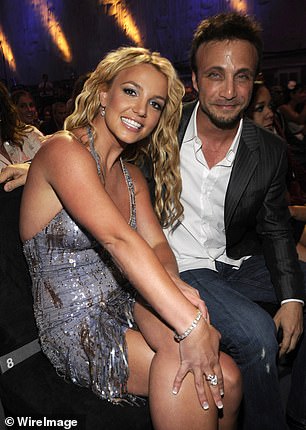 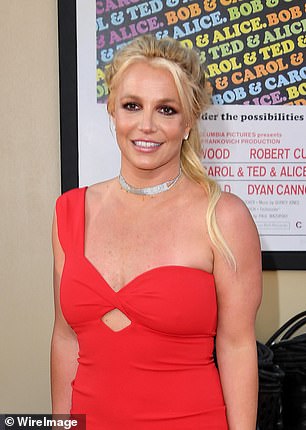 Britney Spears’ longtime manager Larry Rudolph, 57, quit from the position Monday amid the singer’s conservatorship battle. They were snapped in 2008 at the MTV VMAs

Rudolph, who is also the manager of the iconic rock outfit Aerosmith, also addressed on the letter Britney’s father Jamie Spears, who oversees her conservatorship’s finances and business arrangements; and Jodi Montgomery, court-appointed conservator who oversees Britney’s personal care under the terms of the legal arrangement.

Rudolph in his letter clarified that he has ‘never been a part of the conservatorship’ or its operations, and has not been ‘privy to many of these details’ currently under legal scrutiny.

Rudolph, who had collaborated with Spears dating back to 1995, noted he was ‘was originally hired at Britney’s request to help manage and assist her with her career.

‘I will always be incredibly proud of what we accomplished over our 25 years together,’ he said. ‘I wish Britney all the health and happiness in the world, and I’ll be there for her if she ever needs me again, just as I always have been.’ 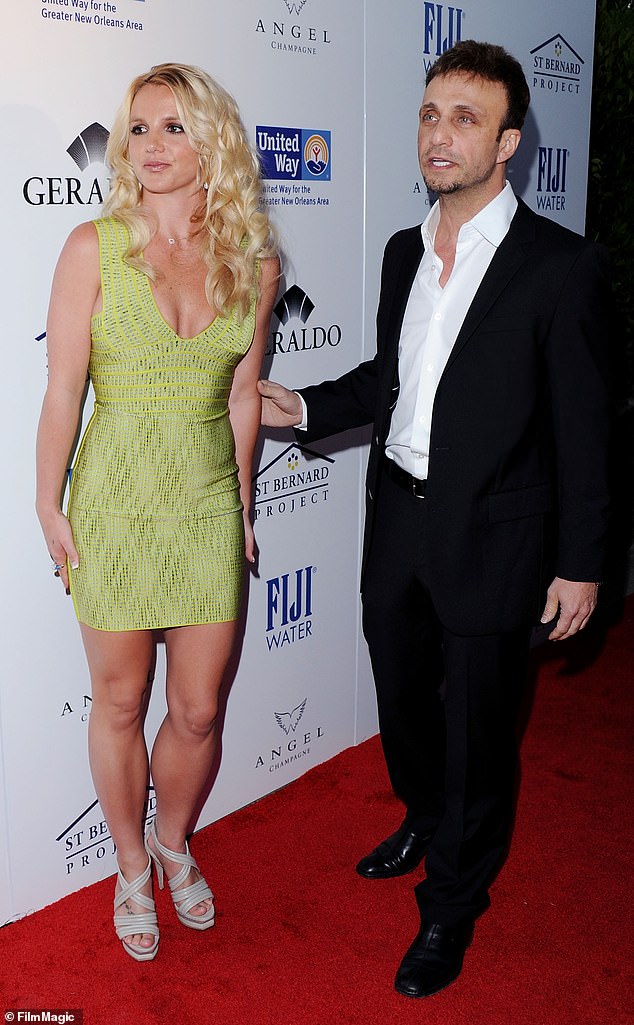 Long ties: Spears and Rudolph were seen at an event in LA in May of 2011 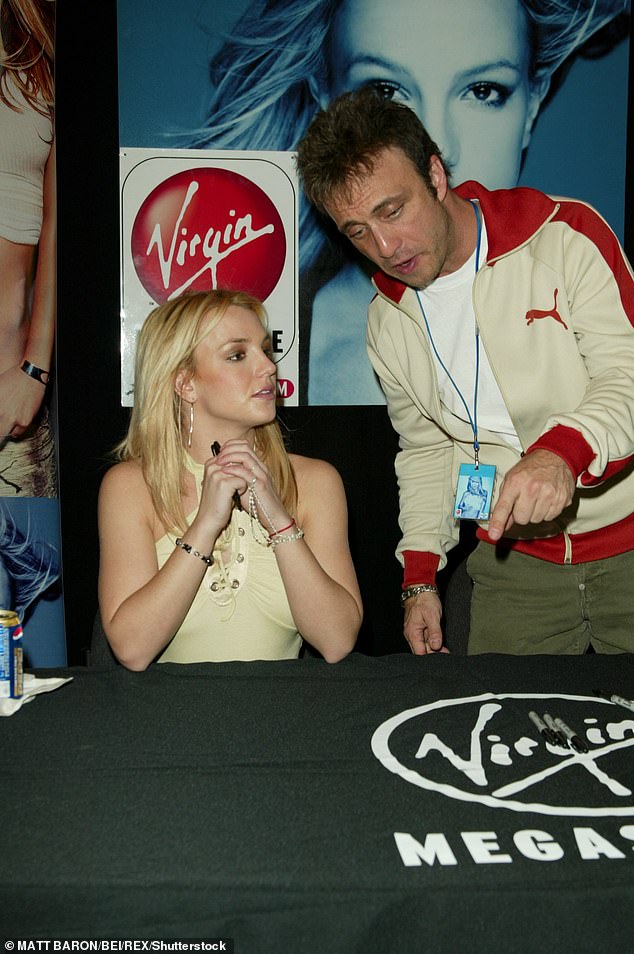 Rudolph clarified that he has ‘never been a part of the conservatorship’ or its operations, and has not been ‘privy to many of these details’ currently under legal scrutiny. He was snapped with the singer in 2003 in NYC

Rudolph’s resignation comes after Los Angeles Superior Court Judge Brenda Penny denied the pop star’s most recent request to remove her father Jamie Spears from the head of the conservatorship on Wednesday, in response to a motion filed last November by Britney’s lawyer Samuel Ingham III, according to Variety.

New court docs revealed in the case said that the request made by Britney’s camp was denied without prejudice, about a week after the Lucky singer gave a statement to the court about her personal travails under the constraints of the conservatorship, which she dubbed ‘abusive.’

The Grammy-winning singer last month spoke with the court for the first time in the 13-year history of the conservatorship, which was implemented amid a pileup of personal problems.

‘I cried on the phone for an hour and he loved every minute of it,’ Britney told the court of her father. ‘The control he had over someone as powerful as me – he loved the control to hurt his own daughter 100,000 percent. He loved it. 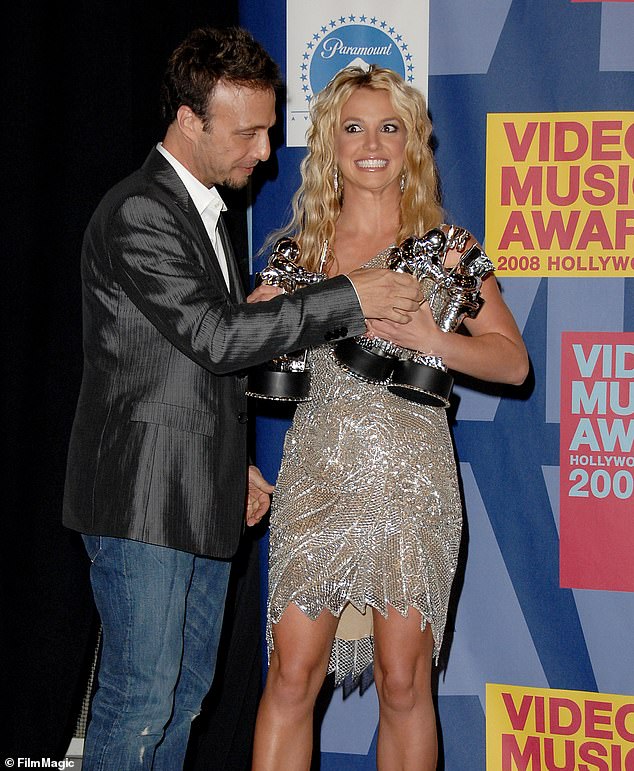 A look back: Rudolph and Spears were seen in LA at the MTV VMAs in 2008, the year the conservatorship was enacted 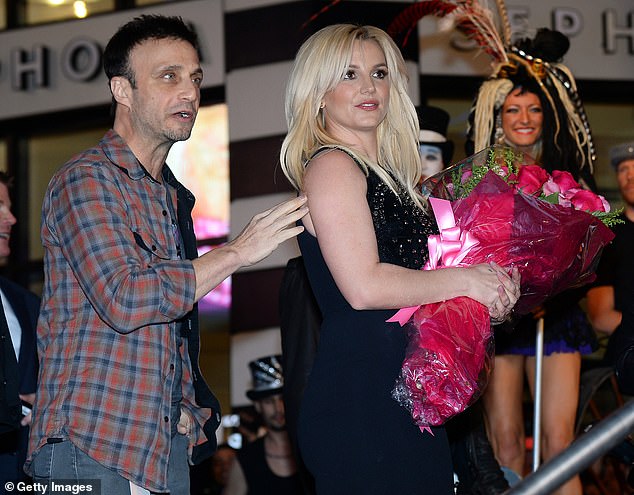 Rudolph, who had collaborated with Spears dating back to 1995, noted he was ‘was originally hired at Britney’s request to help manage and assist her with her career. They were snapped in Las Vegas in 2013

‘I just want my life back. And it’s been 13 years. And it’s enough. It’s been a long time since I’ve owned my money. And it’s my wish and my dream for all of this to end without being tested.’

A lawyer for Jamie on Wednesday filed legal docs that said his client was ‘concerned about the management and care of his daughter’ on Montgomery’s part.

Britney ‘told the court on June 23 that she is opposed to being under a conservatorship and revealed her ongoing disputes with Ms. Montgomery about her medical treatment and other personal care issues,’ Jamie’s attorney said.

Montgomery’s attorney said in a statement that Montgomery continues to be a ‘tireless advocate for Britney and for her well-being.’

The conservatorship case is headed back to court for a hearing on July 14.

Details: Jamie Spears, snapped in 2012, continues to tangle with his daughter over the conservatorship 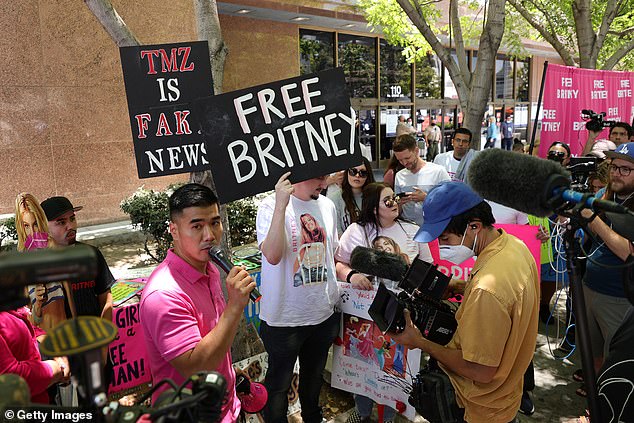