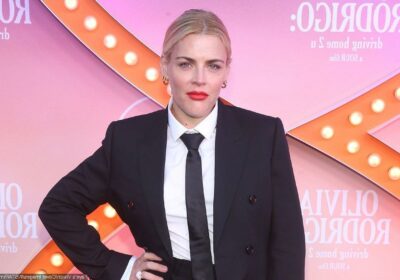 When being escorted away by the authorities for blocking traffic along with Planned Parenthood and other activists, the former ‘Dawson’s Creek’ actress says she’s arrested ‘for equality.’

The 43-year-old star was arrested on Thursday, June 30 outside the Supreme Court, who ruled last week to overturn the landmark Roe v. Wade ruling and the constitutional right to a termination, where she was picked up by police for blocking traffic.

In a video shared by Vice News, Busy, who has Birdie, 13, and Cricket, eight, with her ex-husband Marc Silverstein, was seen being escorted away by officers while wearing a crop top bearing the slogan, “I WILL AID AND ABET ABORTION.” When questioned by a reporter, she said she got arrested “for equality.”

The “Cougar Town” actress, who has spoken in the past about having a termination when she was 15, shared videos and photos from the protest on her own Instagram account and said she was “proud” to have taken part.

She wrote in a lengthy Instagram post, “I was proud to stand today alongside Planned Parenthood Action Fund, the Working Family’s Party, Reverend Barber and the Poor People’s Campaign, Catholic’s for Choice, The National Council of Jewish Women, mi Familia Vota, the Center For Popular Democracy Action and NARAL in an action of peaceful civil disobedience to let lawmakers but more importantly, the people who will be most impacted by this outrageous decision, know that we will not back down, we will not give in and we will not stop fighting until there is equality for all Americans.”

Busy warned protesting the ruling, which will see many states ban abortion outright, will be the “fight of a lifetime” and called for people to “show up” and speak out. She continued, “I can think of no better way to use my privilege and voice than to amplify the message that bodily autonomy IS a human right, as it is ACTUALLY the exact same thing as the promise of life, liberty and the pursuit of happiness. We must ensure that it applies to all of us.”

“This is the fight of a lifetime, y’all. It’s not gonna be short, easy or without setbacks,” Busy continued. “But we must MUST MUST keep showing up and taking action. *YOU* must. I promise I will.”

“These horrible hateful small people who have been hiding behind ‘the will of God’ and indoctrinating new believers every day aren’t reflective of ANYTHING- not the greatness or compassion of humanity and certainly not God,” Busy stated. “I’m pretty sure God has no interest in this bulls**t, honey. And fyi, if Jesus were alive today, you KNOW his DMs would be filled with death threats from the followers of F**KER Carlson and the rest of these a**holes.”

“ENOUGH OF THIS. ENOUGH OF BEING BULLIED BY PEOPLE WHO DO NOT CARE ABOUT YOU OR ME. WE HAVE TO ALL SHOW THE F**K UP. I DON’T KNOW WHO NEEDS TO HEAR THIS BUT WE NEED TO SHOW THE F**K UP NOW.”