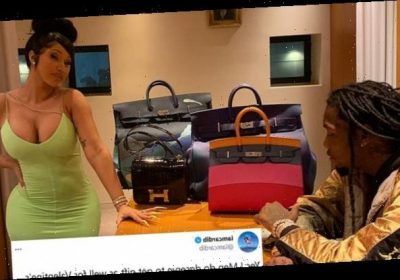 Cardi B under fire for saying men are obligated to spend more money on Valentine’s Day gifts than women: ‘If he buys you flowers you buy him grass’

Cardi B believes in a strict code of etiquette when it comes to Valentine’s Day gifts.

The 28-year-old rapper said she expects to be lavishly spoiled by her man Offset on the romantic holiday, adding that as a rule of thumb, mens’ gifts ‘have to be less expensive then the girls gift.’

Taking to social media to continue to voice her opinions on what she sees fit for the holiday, she fired off a series of tweets before flaunting the beginning of her presents with a video of Chanel boxes. 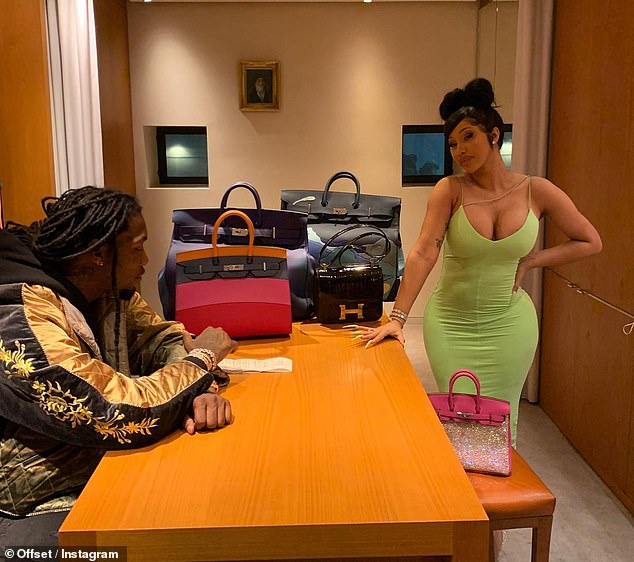 Break the bank: Cardi B, 28, says men should absolutely spend more money on Valentine’s Day then women as she tweets that mens’ gifts ‘have to be less expensive then the girls gift’

‘Buy him grass’: The WAP hitmaker continued to elaborate after her initial tweet, seeming unfazed by the backlash she received from men that implied they should break their bank account

Never one to hold back when it comes to how she lives her life, she began her rant on Thursday as she wrote: ‘Men do deserve to get gift as well for Valentine’s Day, but the gift have to be less expensive then the girls gift. Soo if he buys you flowers you buy him grass.’

After she was met with backlash from her followers – mostly men – she continued to call things between she and Offset ‘even,’ as she listed off the monetary values of various possessions they had exchanged throughout the course of their relationship.

‘Ok so due to my Vday tweet men came on my twitter roasting me sayin “but you bought your man a lambo,” but remember…I got 550K ring on my left hand, 400k ring on my right, Thousands of dollars In Birkins, soo much jewelry, a lambo truck and rollsRoyce truck..so we even in gifts.’ 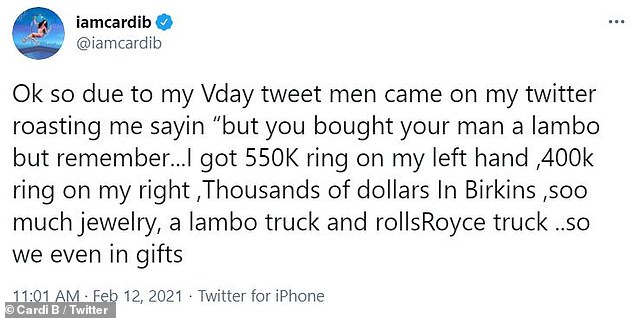 ‘We even’: She was quick to say that over the course of their relationship she had also gifted him many expensive things 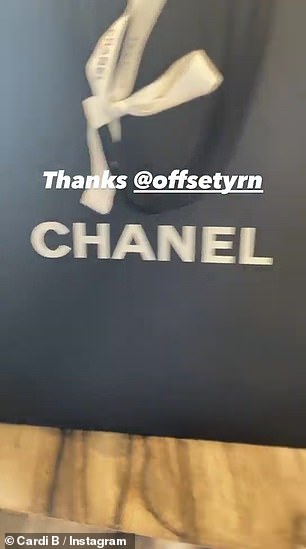 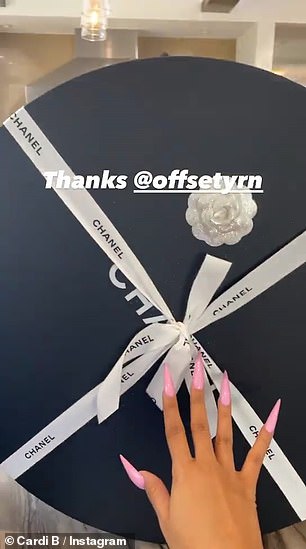 ‘It’s starting:’ She took to Instagram on Friday to debut the start of her gifts as she said ‘it’s starting’ while showing off two new Chanel boxes

Sliding scale: The wealthy rapper tried to bring herself down to earth and draw comparisons between less expensive items 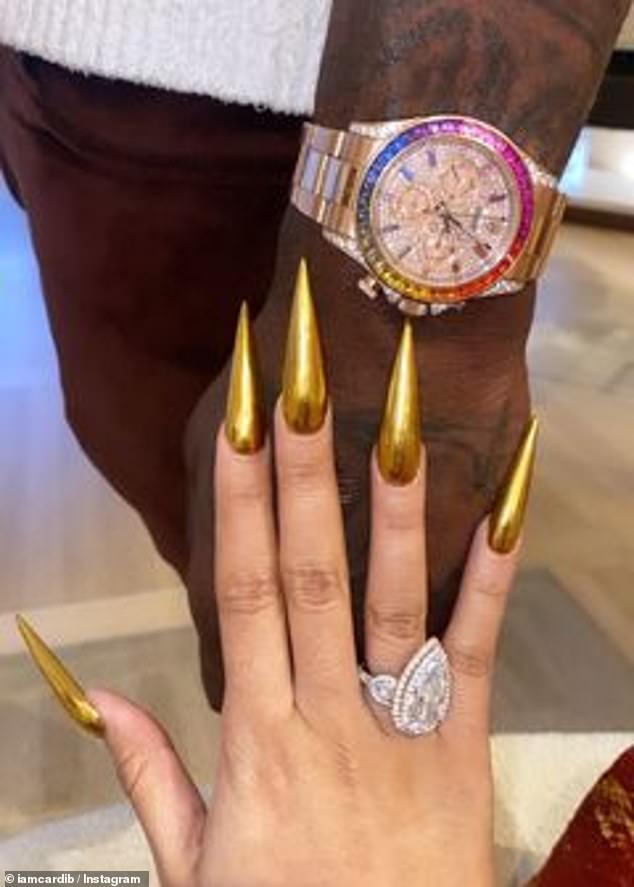 Extravagance: The rapper couple are not shy about their enormous wealth as they frequently show off their pricey diamonds on Instagram

Standing her ground when followers did not take to her statements warmly, after she reiterated, ‘Gotta make sure a N***a spend more on money then I spend on him’ she added:

‘So if ya don’t like the flowers & grass comparisons let me give ya one that make men happy. If you buy her thousand dollars Louboutin heels she should buy you a ps5 that’s around 550$ .It’s fair…now if you think your gift should cost more then ur girl gift you are just a b***h.’

Some Twitter users were quick to call the statements ‘toxic’ and ‘sexist,’ while others got a kick out of her words.

Others tried to say that the lavish gifts she was always receiving were reparations for all the cheating he did, though she admittedly splashed out $500K on a Lamborghini Aventador SVJ for his 29th birthday. 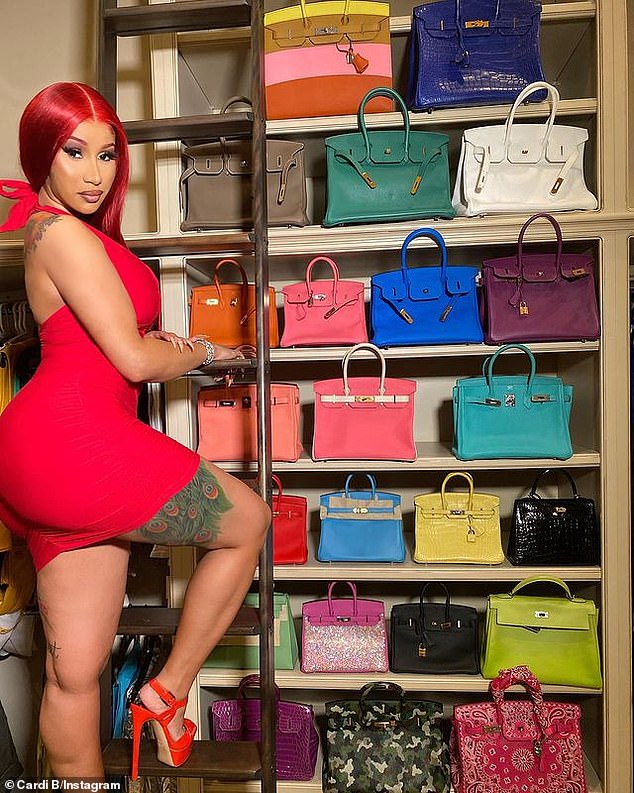 Twirkin’ for a Birkin: Cardi frequently takes to social media to show off her collection of coveted Birkin bags, most recently paying triple asking price for one 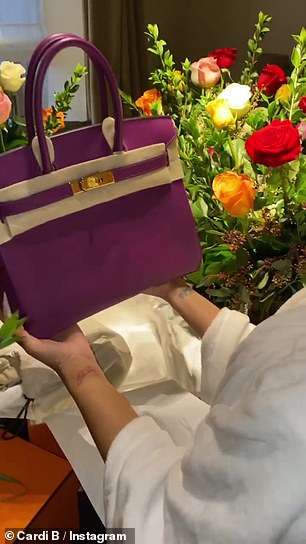 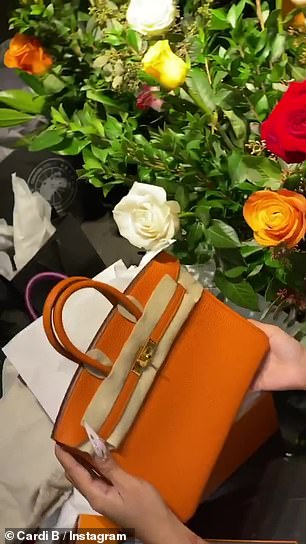 Expensive taste: Last year Cardi received two Birkin bags as she unboxed them on Instagram surrounded by dozens of roses

Keeping score: She maintained that she will always make sure he spends more money on her, though she did splash out a cool $500K for a Lamborghini Aventador SVJ on his 29th birthday

When one user tried to say he had planned to give his girl something along the lines of ‘chocolate, dinner, or flowers’ she told him to only expect sexual services in return.

‘That’s cool. Everything is about your budget…so if you take your girl to dinner, flowers, and chocolate you shouldn’t really get much back but some h**d and p***y.’

On Friday she flashed two Chanel boxes that Offset had given her as an early present on Instagram as she said ‘It’s starting!’

Last year for Valentine’s Day she received two Birkin bags as she unboxed them on Instagram surrounded by dozens of roses.

The Migos rapper seems to have no qualms about Cardi’s lavish collection of luxury goods as he wrote in October, ‘Stop letting people on the internet tell y’all who can get a Birkin at the store, and how many Birkin’s you can get.’

Currently the magnitude of this weekend’s lavish gift giving has yet to be revealed. 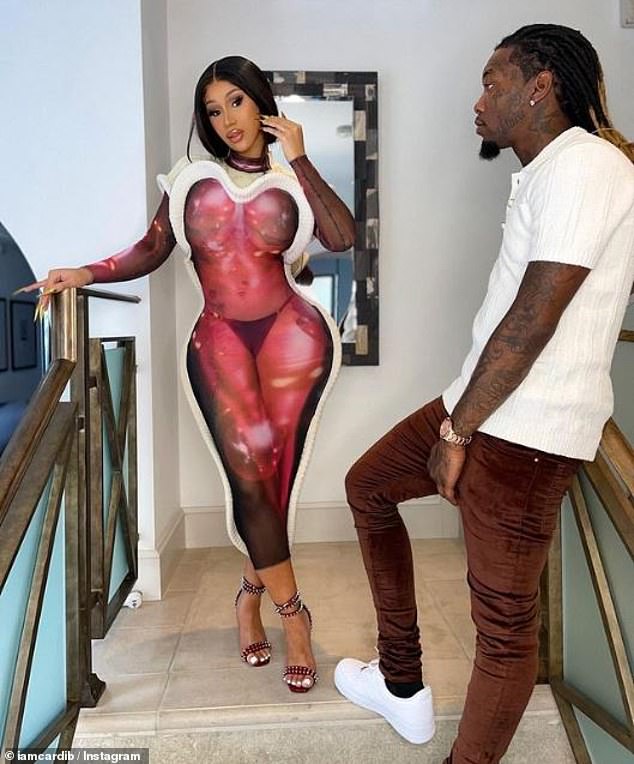 Mutual spoiling: The wealthy pair rival each other in the gift giving department, frequently splashing out millions of dollars on gifts – some for special occasions and others just because