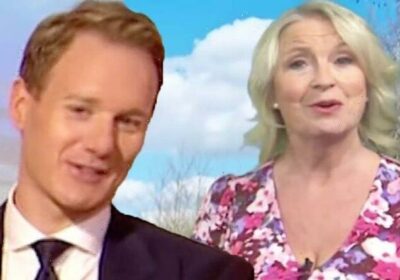 Carol Kirkwood, 59, has hit back at Dan Walker after he made a joke about her getting a new job on BBC Breakfast. Some viewers have been speculating that the weather presenter is set to replace Dan after he announced his departure from the show earlier this month.

Making a dig at the rumours, Dan took to Twitter to congratulate his co-star on her “new job” in view of his 753,000 followers.

He shared a picture of Carol from an article covering the rumours, which had been captioned: “Fans think Carol Kirkwood could replace the star.”

Dan wrote: “Good morning Carol. All the best with your new job.”

Carol simply exclaimed in response: “NAUGHTY!!” alongside a string of laughing and kissing emojis.

The BBC weather presenter had previously addressed the ongoing speculation herself on the social media platform after fans asked whether she was set to step in.

Dan recently announced he will be stepping away from the BBC after hosting BBC Breakfast since 2016.

The presenter has decided to join Channel 5 as a lead anchor on the recently re-launched hour-long 5pm news bulletin.

Channel 5 confirmed the news on Twitter last week along with a short one minute video featuring Dan.

The broadcaster announced:  “Some news to share with you all from us at  @5_News.

“@mrdanwalker will be bringing you the news at 5pm every day from now on.

“And he’s got something to tell you all – watch his video down below.”

In the clip, Dan appeared in good spirits as he explained: “Hello, Dan Walker here. I have a little bit of news for you.

“In the next few weeks, I’m going to be leaving BBC Breakfast and moving to 5 news and Channel 5

“I am really excited, but this has also been a massive decision for me.”

He praised his co-star Sally Nugent, but continued: “Channel 5 came with big ambitions, with big plans, and I don’t think opportunities like this come around very often and I can’t wait.”

Dan will join Claudia-Liza Vanderpuije, who co-presents 5 News, which is produced by ITN.

5 News delivers in-depth analysis to a teatime audience from around the UK.