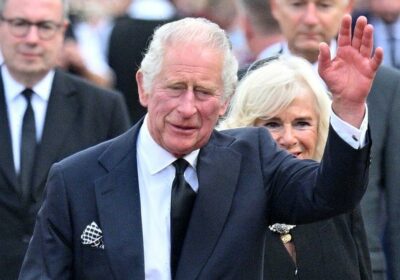 King Charles has undertaken one of his first tasks as monarch, meeting with Prime Minister Liz Truss.

The in-person audience with the new prime minister, who is still in her first week in the role, came shortly after Charles, 73 , returned to London from Balmoral, where he was at his mother's side as she died.

The meeting comes just days after the late Queen Elizabeth II welcomed Truss to Balmoral as she took up the role of prime minster on Tuesday.

While a period of national mourning lasting 10 days has officially begun, royal protocol dictates that Charles is to be thrown into official duties as Monarch.

Together with Camilla, who is now Queen Consort, Charles returned to London on an RAF jet on Friday afternoon.

The couple were then greeted by huge crowds chanting 'God save the King!' outside Buckingham Palace.

Settling into his new role, Charles greeted well-wishers and took the time to shake people's hands while doing his best to remain smiling.

Charles and Camilla then surveyed the flowers placed outside the Palace, and the King became visibly emotional as he took in the hundreds of floral tributes left in honour of his mother.

The King also kept calm and carried on in the face of one member of the public who wished him well with a kiss on the cheek.

Later today, Charles will address the nation for the first time as King. The speech was recorded shortly after the new Monarch arrived at the Palace.

Check out all the latest hot topics on OK! magazine’s news section and discover exclusive celebrity news about your favourite soap actors and reality stars.

We're also on Facebook.com/okmagazineuk – for the latest online celebrity news, features, galleries and videos throughout the day from your favourite site.