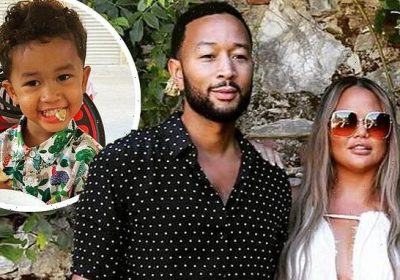 She reemerged on social media in recent weeks after going silent in May in the wake of her cyberbullying scandal.

But Chrissy continued her tentative return to Instagram on Friday when she shared a sweet snap of herself and her husband John Legend, 42, looking as stylish as ever on their Italian trip.

The 35-year-old model also posted some adorable photos of her children Miles, three, and Luna, five, having hilariously different reactions to dinner at a restaurant. 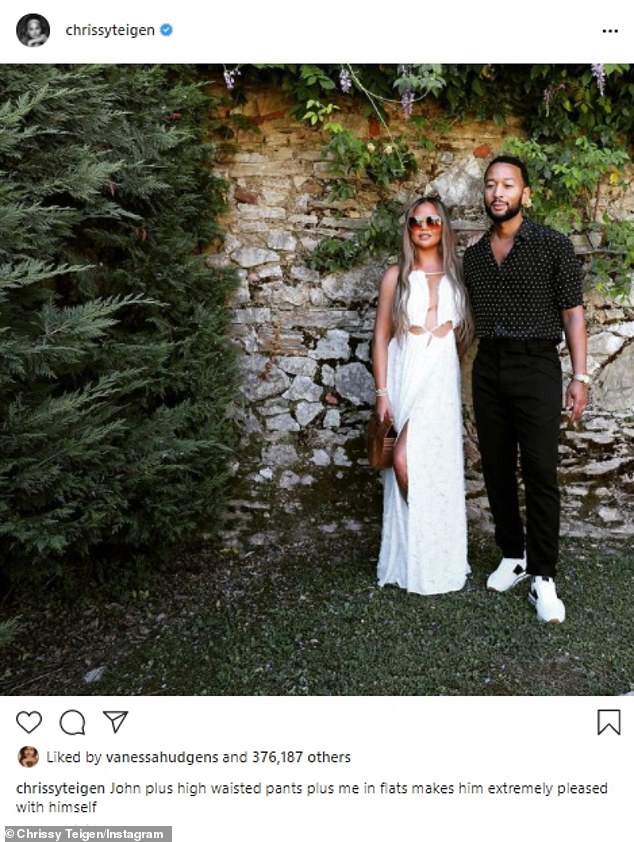 Loved-up couple: Chrissy Teigen, 35, and her husband John Legend, 42, looked cute together as they posed ahead of a family dinner in Italy as she continues her return to social media

Chrissy and John were pictured in front of a moss- and ivy-covered stone wall outdoors.

She highlighted her cleavage in a white dress with cut-outs over her chest and midriff, along with a high skirt to showcase her toned legs.

The Bring The Funny judge had her long brunette hair parted down the middle and cascading down her front in delicate waves, and she accessorized with large orange-tined sunglasses and a brown handbag.

He had his arm behind Chrissy as they posed together.

‘John plus high waisted pants plus me in flats makes him extremely pleased with himself,’ she joked in her caption. 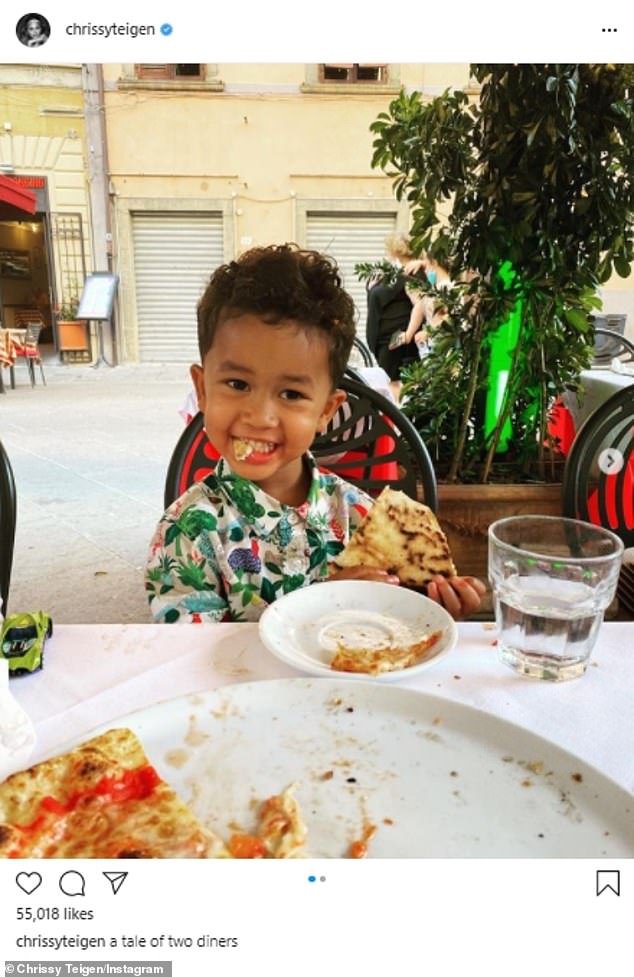 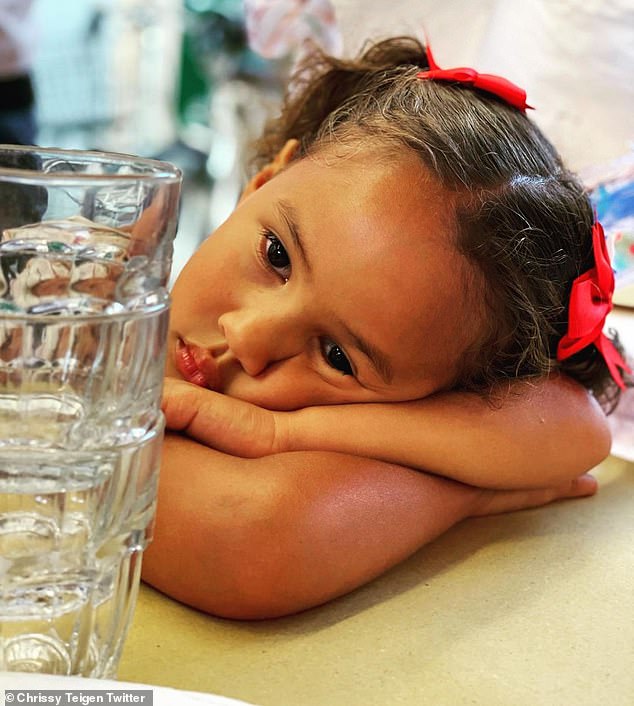 A study in contrasts: Miles chomped dramatically on a slice of pizza while grinning ear-to-ear, as Luna looked somber while gazing at a stack of glasses

Miles chomped dramatically on a slice of pizza while grinning ear-to-ear with part of it lodged in his teeth.

He looked like the spitting image of his father in the cute photo.

Luna, on the other hand, didn’t seem to be in the mood for a meal. She rested her head on her hands as she gazed somberly at a stack of glasses. 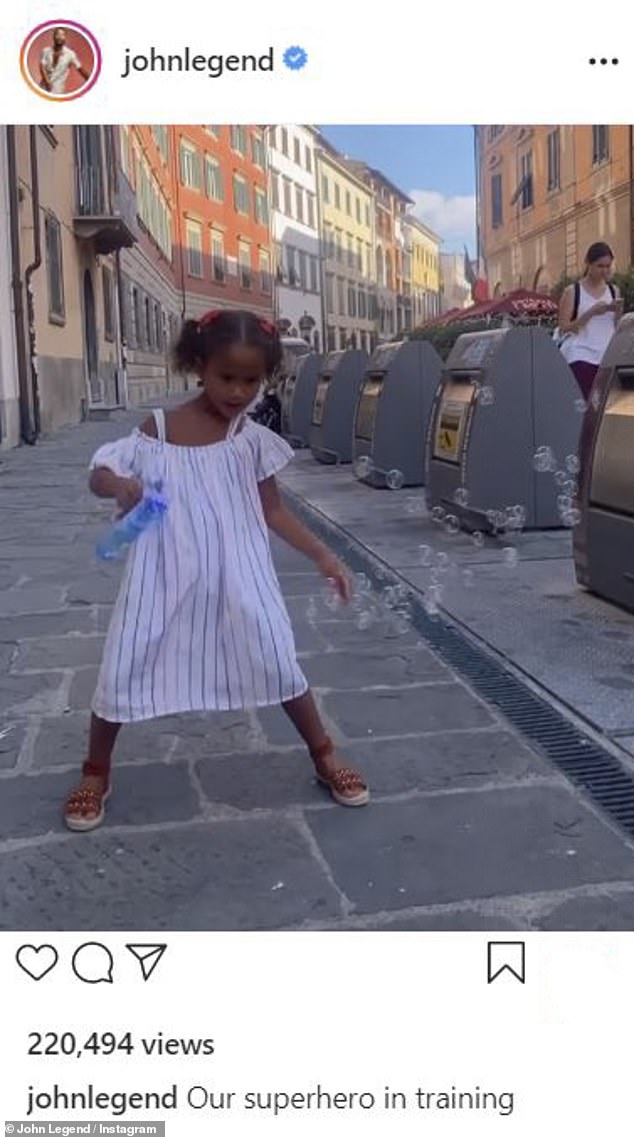 Letting loose: Later on Friday, John shared an adorable video of Luna in a white dress with rainbow-colored vertical stripes as she danced on a city street while blowing bubbles 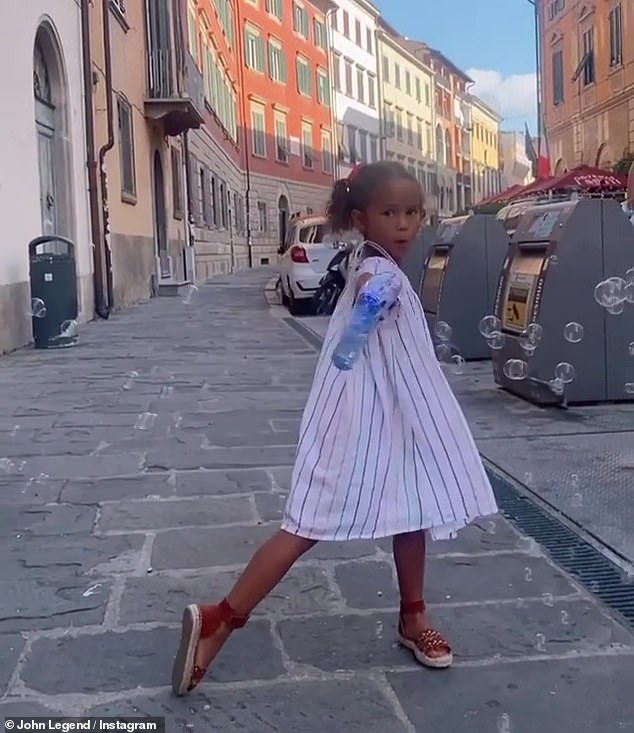 Cute: ‘Our superhero in training,’ he wrote 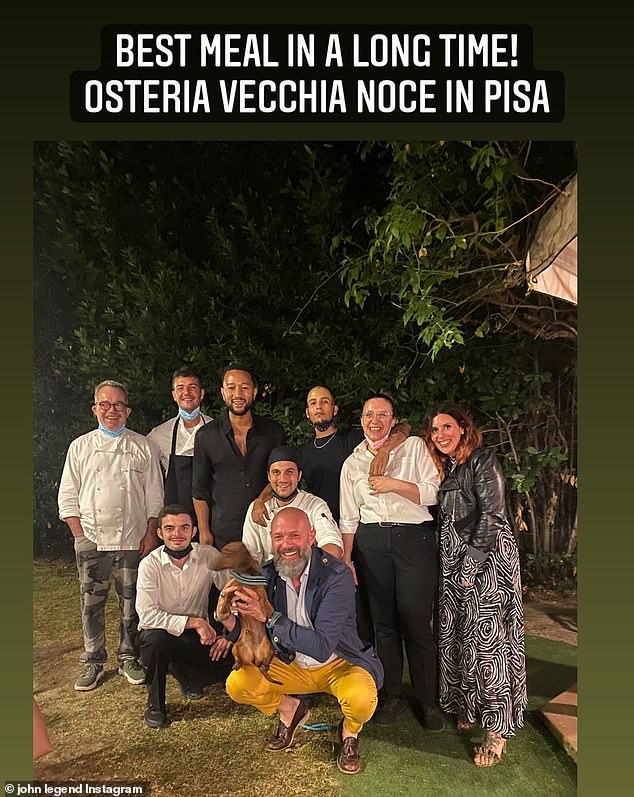 ‘Best meal in a long time!’: He also gave a big thumbs up to their dining experience in a fun photo posted to his Instagram Stories of him posing with the staff of Osteria Vecchia Noce in Pisa

Later on Friday, John shared an adorable video of Luna in a white dress with rainbow-colored vertical stripes as she danced on a city street while blowing bubbles.

‘Our superhero in training,’ he wrote.

He also gave a big thumbs up to their dining experience in a fun photo posted to his Instagram Stories of him posing with the restaurant staff and a puzzled Dachshund.

”Beat meal in a long time!’ he gushed, adding that they ate at ‘Osteria Vecchia Noce in Pisa.’ 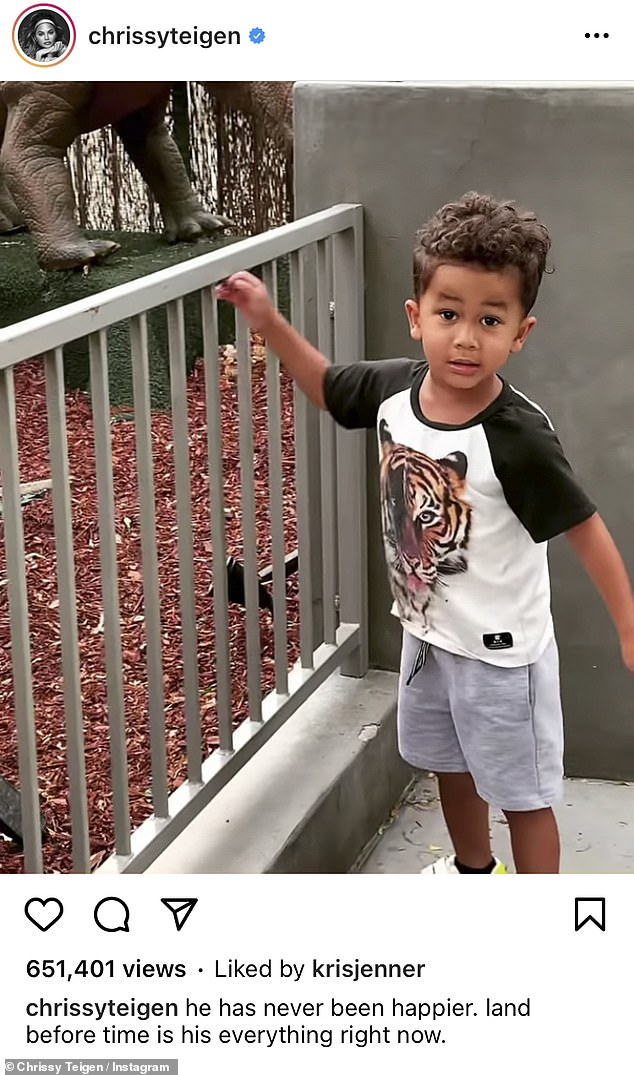 Overjoyed: The social media star’s time off in recent days included a stop to see multiple dinosaur statues at a park, which Miles seemed to love 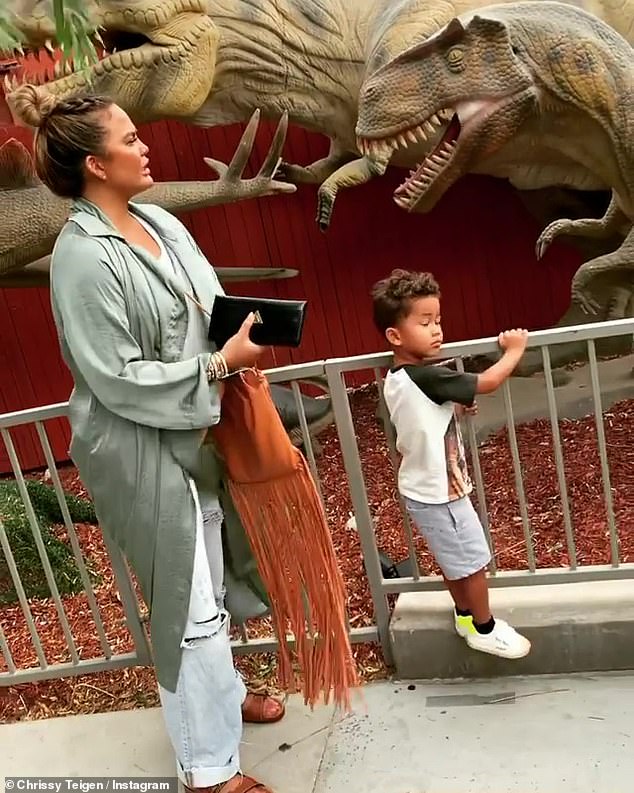 Land before time: ‘They’re so cool!’ he shouted at the top of his lungs before pointing out every dinosaur name he knew

The social media star’s time off in recent days included a stop to see multiple dinosaur statues at a park, which Miles seemed to love.

‘They’re so cool!’ he shouted at the top of his lungs before pointing out every dinosaur name he knew.

‘He has never been happier,’ Chrissy captioned the clip. ‘Land before time is his everything right now,’ she said, referring to the popular 1988 animated dinosaur-themed film The Land Before Time.

Since reemerging from her self-imposed social media exile, the Chrissy’s Court star has tried to show off a care-free yet reserved persona.

She initially went silent in May after former reality star Courtney Stodden revealed that Chrissy had sent them a series of bullying tweets in 2011, when they were only 16.

In one of the caustic tweets, she urged Courtney, who is nonbinary and uses they/them pronouns, to take a ‘dirt nap,’ a euphemism for dying. 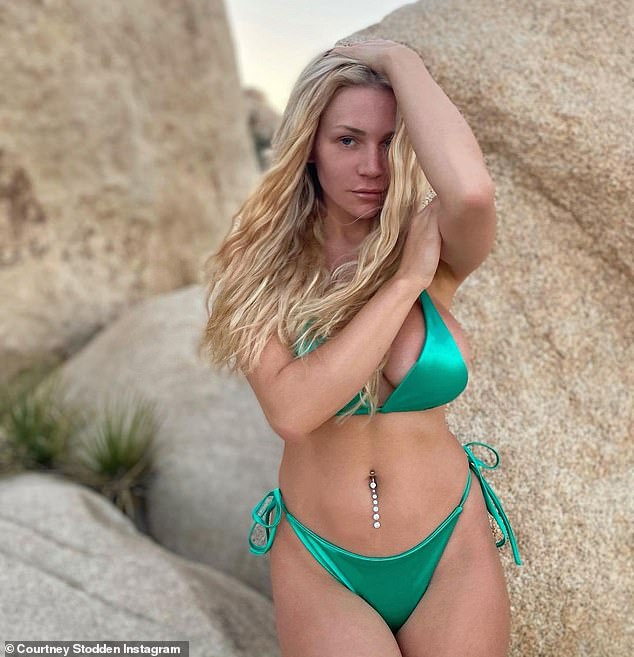 Accuser: Chrissy has been getting some unwelcome attention of late, due to accusations from the likes of Courtney Stodden (pictured on Instagram) and Michael Costello of cyberbullying

But in June, Project Runway designer Michael Costello reenergized the debate over Chrissy’s social media persona by claiming that she sent him a series of bullying direct messages and hounded him over a photoshopped racist social media post.

He claimed to have suffered suicidal thoughts brought on by the online harassment and the damage it allegedly did to his business.

On June 18, a furious Chrissy returned fire and claimed that the messages Michael shared had been ‘fabricated,’ while her husband John Legend also supported her.

‘No idea what the f**** Michael Costello is doing,’ she tweeted.

In her statement, Chrissy said that her Instagram handle had been misspelled in the screenshots posted by Michael, and she also claimed that the screenshots showed Instagram design elements that weren’t part of the site at the time the messages were allegedly sent. 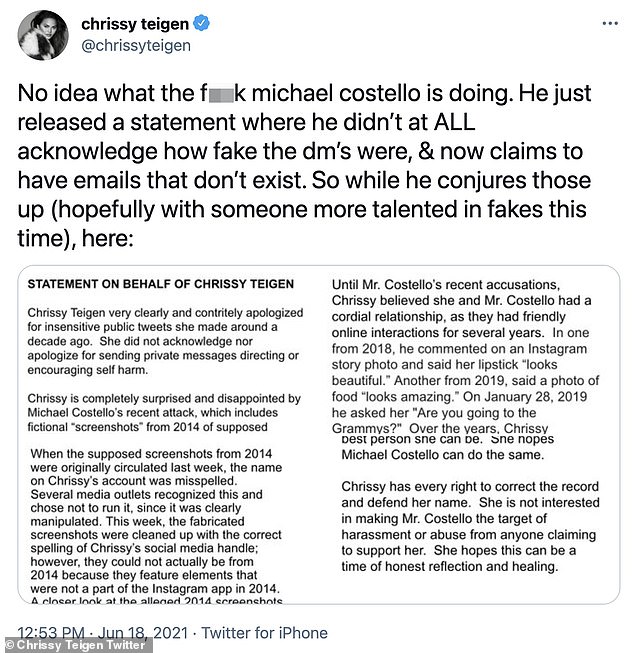 Chrissy hits back: Chrissy hit back at bullying claims made by Michael on Twitter. She claimed the DMs he posted were fabricated

Amid her social media scandals, the catwalk star has relied on her husband John.

On Sunday, she shared a sweet Father’s Day photo of him with their five-year-old daughter Luna and three-year-old son Miles with a loving caption.

‘There are no words. Only tears that I am fresh out of,’ she wrote, possibly alluding to the scandal. ‘To our everything, we love you forever.’

The Cameroonian singer Dencia joined in on the bullying scandal when she claimed that Chrissy had pushed her twice at the 2016 Grammy Awards after allegedly believing that the singer’s assistant had recorded her on his phone.