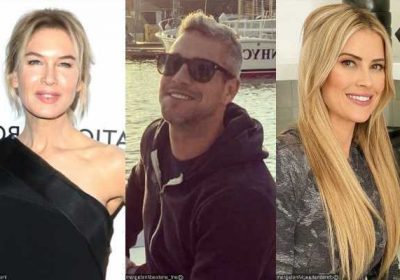 The ‘Flip or Flop’ star, who reportedly has been dating Joshua Hall for ‘the last few months,’ is photographed with him at the Los Angeles International Airport ahead of their flight to Mexico.

AceShowbiz -Christina Haack (previously Christina El Moussa) has officially bid farewell to her single status. While her ex-husband Ant Anstead already moved on with Renee Zellweger, the “Flip or Flop” star found herself a new love as she was caught on camera holding hands with her new boyfriend.

On Tuesday, July 6, the 37-year-old HGTV personality was spotted at the Los Angeles International Airport with her beau Joshua Hall. In a clip obtained by Page Six, she said she’s “pretty lucky” to date him. She also refused to comment on her ex’s romance with the “Bridget Jones’s Baby” actress.

Christina is said to head to Mexico with Joshua to celebrate her 38th birthday, which will take place on Friday, July 9. About how long the pair have been together, a source told the outlet, “They’ve been dating for the last few months.”

During the outing, the real estate investor wore a gray tank top, dark shorts and white sneakers with a flannel shirt wrapped around her waist. She completed her look with dark sunglasses and a brown backpack. Her companion, meanwhile, sported a white T-shirt, grey pants, matching cap and navy-blue Nike sneakers.

About Joshua, he was reportedly a former police officer and now works in a realty firm in Austin, Texas. In a self-written bio on the firm’s website, he wrote, “Before my 16-year career was cut short due to injuries sustained in the line of duty ultimately leading to an early retirement, I took great pride in helping people with everyday difficulties and putting them at ease.”

Christina’s relationship with Joshua came after she split from Ant in September 2020. They finalized their divorce in June this year, the same month when the former “Wheeler Dealers” host began dating the Oscar-winning actress Renee.

Christina and Ant tied the knot in December 2018. Together, they share a 1-year-old son Hudson. She is also a mother to 5-year-old son Brayden and 10-year-old daughter Taylor, whom she shares with her previous husband, Tarek El Moussa.