Folk singer Fred Wedlock used to boast he was ‘the oldest swinger in town’. But Fred never met 78-year-old John, who runs the Liberty Elite club for a very different kind of swinger.

Fred’s top-ten single in 1981 was talking about the embarrassment of going to a disco and being asked if he needed to sit down, by the kind of girls who once invited him to dance. He didn’t dare smile, because his dentures glowed blue under the ultra-violet lights.

There’s music and dancing at John’s club, too, but it’s just a distraction from the naked hot tub and the ‘play room’. He proudly showed off the sliding manacles on a wrought-iron bed of his own devising, which allowed handcuffed lovers to roll over. Well, no point in being uncomfortable, eh? 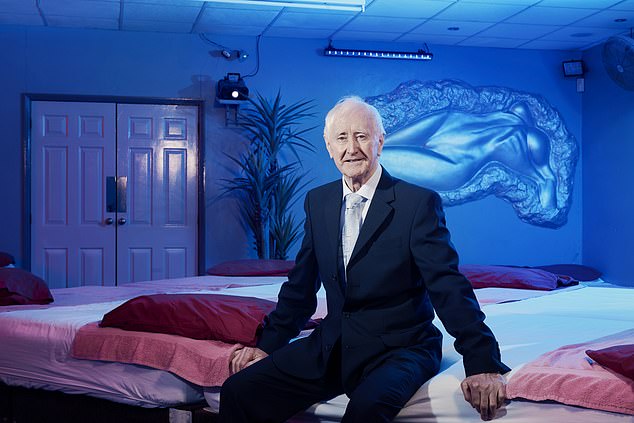 John, 78, runs the Liberty Elite club for a very different kind of swinger

The Liberty Elite clubhouse stands in the middle of a barren patch of Tarmac outside Rugby, with motel-like rooms for guests. There are open prisons that look more alluring.

‘We welcome people from all walks of life, but it helps if you’re attractive,’ John said. Even then, you’re not guaranteed of a good time.

Hannah and Justin, who got into swinging after having their children, couldn’t meet anyone who wanted to romp. Even the most dedicated masochist is going to find that painful. It sounds like a Bernard Manning joke: ‘I took my missus wife-swapping, but no one would have her.’

Simon was equally picky. Sifting emails from men who wanted to sleep with his wife, he binned any that misused punctuation.

Sex is important, but so are apostrophes. You’re never too liberated to be literate.

Feminist of the week:

Fed up with waiting for men to decide her fate, Lata (Tanya Maniktala) picked her favourite suitor and proposed to him on a train as A Suitable Boy (BBC1) ended. And she voted in the election, too! Such a Thoroughly Modern Miss.

Still, the food seemed quite decent. Club manager Chanelle spent ages doing the sandwiches. ‘We do provide a good spread,’ she said. That could be their motto.

Once the passions of youth subside, most of us find it more relaxing to do the garden. Diarmuid Gavin had plenty of fuel for horticultural fantasies as he coaxed us to go Gardening Together (BBC2).

Diarmuid’s spectacular terraces, cultivated around quite an ordinary house in Co Wicklow, Ireland, are filled with plants that tower above head height. It’s more rainforest than herbaceous border, and the director missed no excuse to send up a camera drone for aerial shots.

The presenter was busy digging a sunken fire pit the size of a swimming pool for summer barbecues. When a garden project involves six tons of concrete, it’s a little too ambitious for me.

But the neighbours on a street in Belfast who turned the back lane behind their houses into a hanging garden — now they were an inspiration.

Everybody contributed a few pots, and the brick alley became a riot of summer colours.

A lovely idea, and one that lived up to the show’s title.