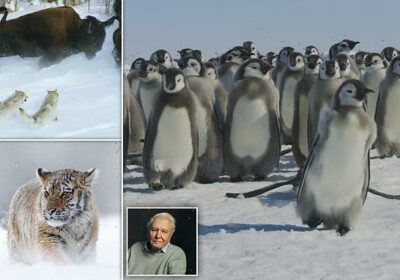 Sir David’s frozen fantasia will give you chills… The original was spectacular. The sequel is spectacular-squared: CHRISTOPHER STEVENS’s five-star review of Frozen Planet II

Have thermal long johns, will travel. The life of a wildlife film-maker on Sir David Attenborough’s natural history epics is always tough – but the ordeals of the Frozen Planet II crew defy belief.

Among hundreds of breathtaking shots was one of emperor penguin chicks taking their first leap into the sea. That moment when the first bold bird threw itself into the water was the end of a 30-mile journey for the fledglings across the Antarctic ice.

It was a crucial, climactic image. To capture it, one cameraman floated in the Southern Ocean for seven hours, protected by a white survival suit, disguised as a slab of ice. 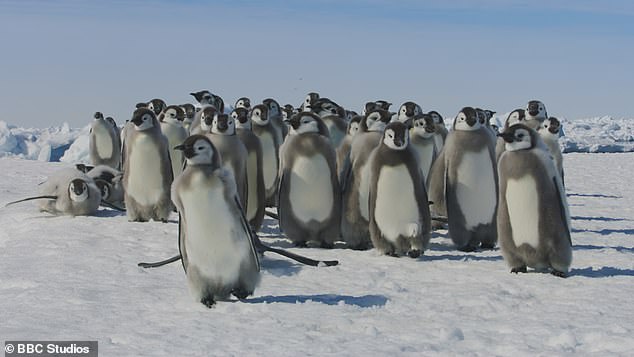 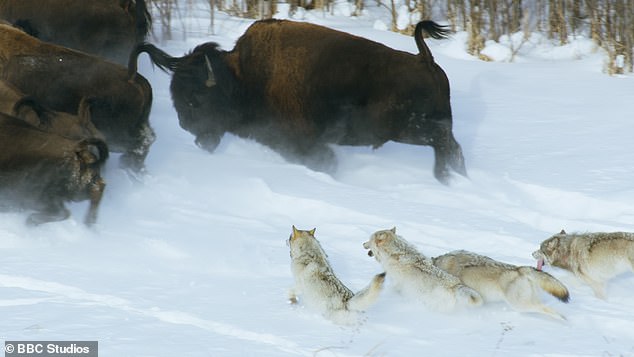 The super-pack of wolves strategy is to break the herd up, again and again until they can target a weak and slower individual (Filmed in Wood Buffalo National Park, Canada)

When I interviewed series producer Elizabeth White last month, she told me that new camera teams had to go through rigorous training, similar to special forces exercises, before being sent out on winter missions that could last months.

In the Cairngorms, teams learned to dig snow holes to take shelter for the night. Then they flew to Svalbard, high in the Arctic Circle, where – in case of accidents while filming – they practised falling into freezing water in complete darkness and scrambling to safety.

But nothing could fully prepare them for days spent motionless in the bitter cold of the world’s most remote fastnesses. In the snow-covered Gobi desert, filming the rarely seen pallas’s cat, one cameraman in a hide placed his packed lunch on the ground. For the next three hours, not daring to stir a muscle, he watched the cat through his viewfinder. By the time he reached down to unwrap his meal, it was frozen right through.

From the warmth of our sitting rooms, we are able to marvel at the results of their endurance. The original Frozen Planet, in 2011, was spectacular. The sequel is spectacular-squared – exponentially superlative. 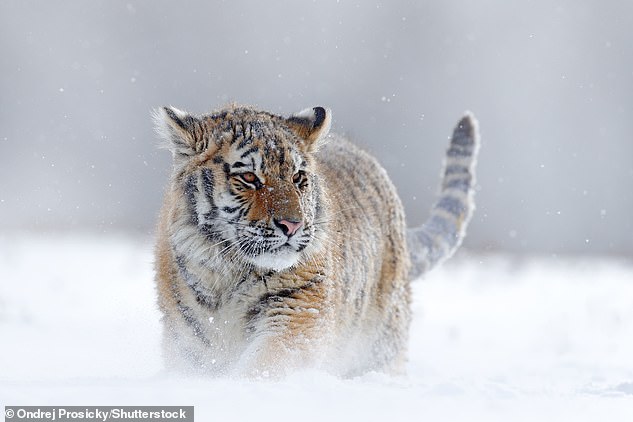 From the warmth of our sitting rooms, we are able to marvel at the results of their endurance 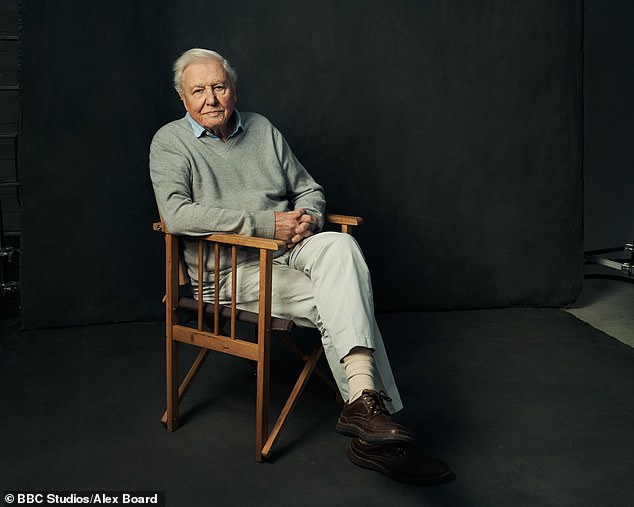 Filmed in ultra-high definition, making full use of drone technology that didn’t exist a decade ago, this is wildlife imagery so crisp and clear that every time I gasped, I expected to see my breath billow out in chilly clouds.

Without doubt, the most astonishing clips were those of killer whales hunting seals. With the balletic co-ordination of a synchronised swimming team they flicked their tails to create a minor tidal wave. The seal was washed into the water and snapped up. Incredibly, in the immense expanse of ocean, the crew had tracked down a family of whales that appeared in the first Frozen Planet.

Other segments leave you breathless. It was impossible to watch a grizzly bear hunting musk ox calves without being both fascinated and appalled.

Not every sequence was so bloodthirsty. In Greenland, cameras caught the mating display of the hooded seal. Males entice females by inflating sacs on their noses: The bigger the balloon, the more masculine they look. To seal thedeal, a blubbery Lothario then snorts a bubble of pink tissue from his left nostril.

The most difficult animal to film, the producers told me, was the vanishingly rare Siberian tiger. It took over two years for the crew to achieve clear pictures of them – and even these were brief.

A beautiful image was created when a bear rubbed its fur against a tree, enjoying a good scratch. Months later, a tiger came by the same spot. By superimposing the two shots, the film editor made it look as if tiger and bear were side by side, like a picture in a children’s book.

Whether you’re a child or the world’s greatest naturalist, Frozen Planet II is certain to amaze, astound and entertain