Home » Celebrities » Comedian Billy Connolly, 76, can no longer share a bed with his wife

Comedian Billy Connolly, 76, can no longer share a bed with his wife Billy Connolly, 76, reveals he can no longer share a bed with wife Pamela Stephenson as his Parkinson’s makes him ‘sleep like a wild animal’

Sir Billy Connolly has revealed that he can no longer share a bed with his wife of 30 years as Parkinson’s makes him ‘sleep like a wild animal’.

The comedian, who now lives in Florida, was diagnosed with the disease six years ago and had to retire from stand-up due to the condition.

He told the Mirror: ‘I sleep like a wild animal. Laughing and singing or having fights. Pamela has to sleep in another bed.’ 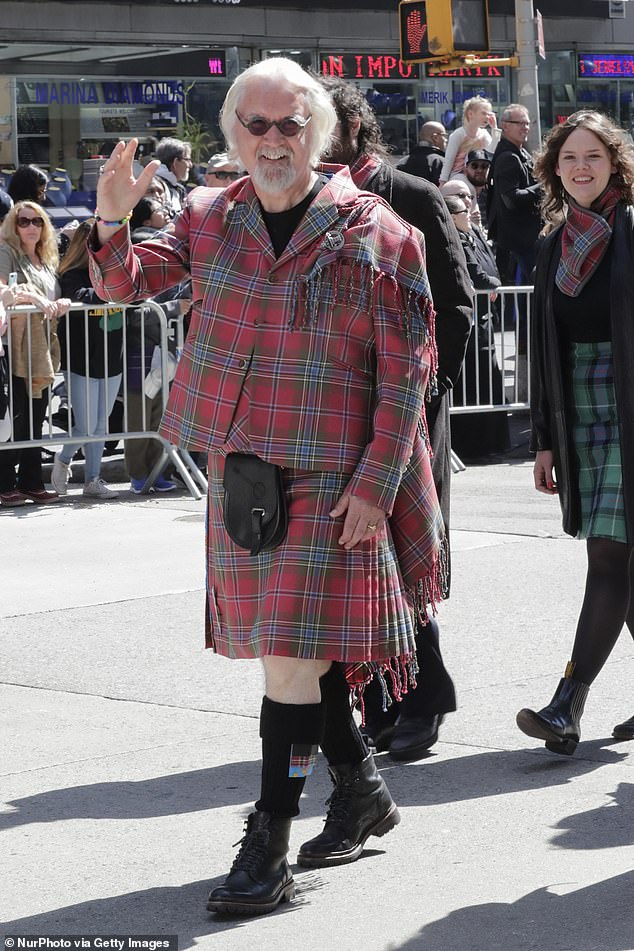 Opening up: Billy Connolly, pictured during the New York City Tartan Day Parades in April, has revealed he can no longer share a bed with his wife because he ‘sleeps like a wild animal’

Despite the interruptions in the night Billy said his wife has never complained and added that she’s ‘a rather attractive nurse.’

The Scottish comedian and Pamela got married in 1989 after they met when she was a star on the BBC comedy Not The Nine O’Clock News.

Billy also revealed that he now struggles to do everyday tasks such as putting money in his wallet, but that people are often happy to help.

He said that the illness ‘brings out the best’ in others who quickly jump up to help him when he asks for their assistance. 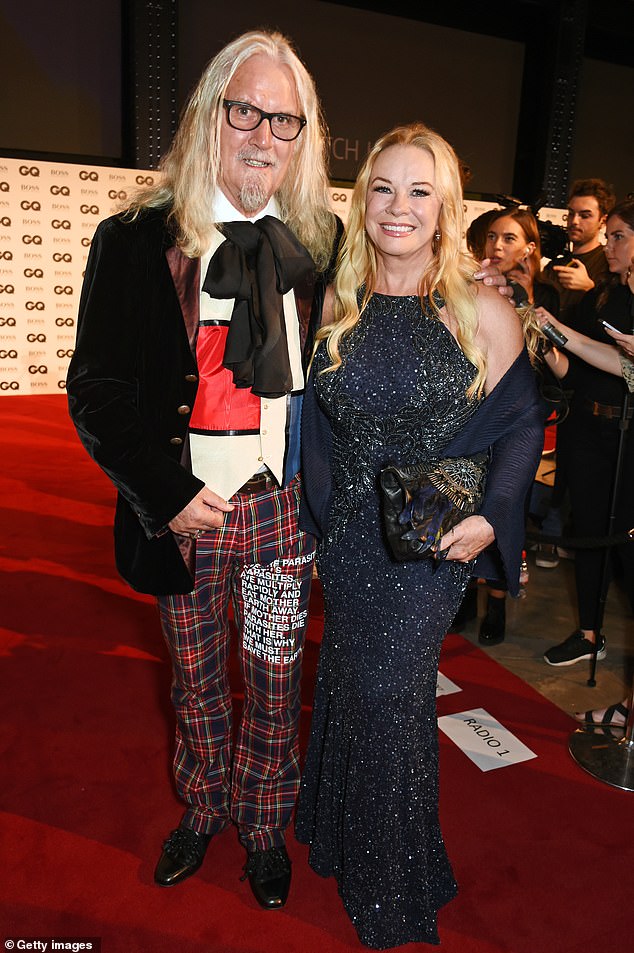 Happy couple: The comedian has been married to Pamela Stephenson, pictured together in 2016, since 1989 after they met when she was on the BBC comedy Not The Nine O’Clock News

Last month Billy had to explain he had Parkinson’s to a musician who thought he was pretending to play the bagpipes in his latest TV show.

In a poignant moment in an episode of Great American Trail, the 76-year-old was speaking to a band he met in New Jersey.

One of the pipers spotted his hand moving and asked him if he played, adding: ‘I see your fingers going.’

Connolly made light of the comment, replying: ‘No, I’ve got Parkinson’s, it’s second best to playing the pipes.’ 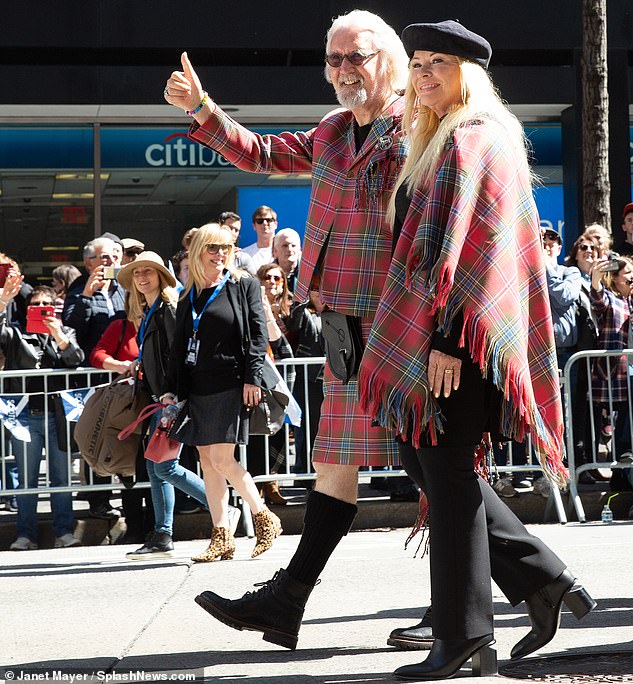 Together: Billy said Pamela, pictured at the Tartan Day Parade in New York this year, has never complained about him ‘laughing and singing or having fights’ in his sleep

He said afterwards: ‘It affected me a lot more deeply than I thought… I’m scared, shaking.’

The Great American Trail, is Billy’s comeback to TV after he retired from stand-up last year.

The father-of-five also revealed his 50-year-old son Jamie has been battling a drug and alcohol addiction on the show. 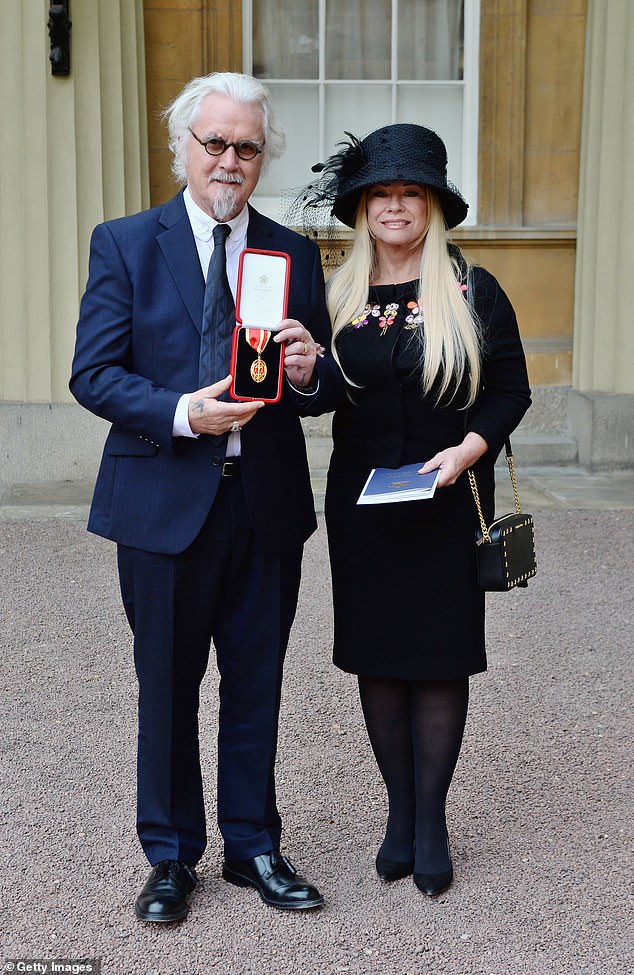 Diagnosis: Billy, pictured with his wife in 2017, found out he had Parkinson’s six years ago and now lives in Florida

Billy said that Jamie, who is from his first marriage to Iris Pressagh, had been to Alcoholics Anonymous (AA) and Narcotics Anonymous (NA) meetings to get help.

He also hit out at the lack of understanding and compassion shown towards those with addiction problems while at the Southern West Virginia Fellowship Home.

Connolly said: ‘My son has a problem and he’s in AA and NA.

‘He told me when he went to the detox place some kids were being let out and they were back on the stuff before they got to the railway station. It’s so powerful.’ 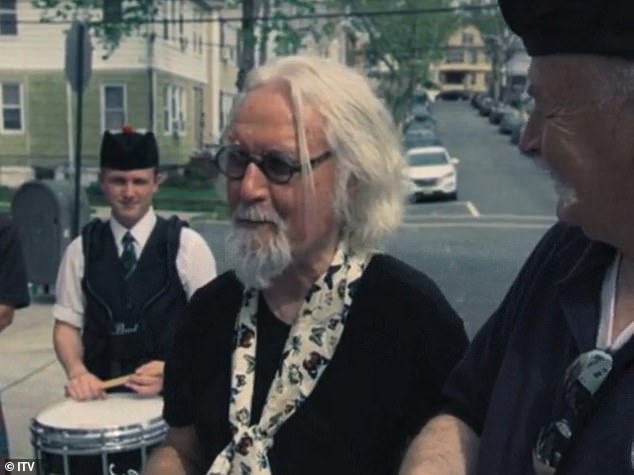 Touching: During an episode of Great American Trail Billy was talking to a pipes and drums band and was asked if he was playing when he hands started to shake

Sir Billy, who gave up drinking 35 years ago, said he had smoked cannabis but had no experience of harder drugs.

He said: ‘I know nothing about the whole drug thing. I’ve smoked a little dope but I’ve never been deeply involved in it.’ 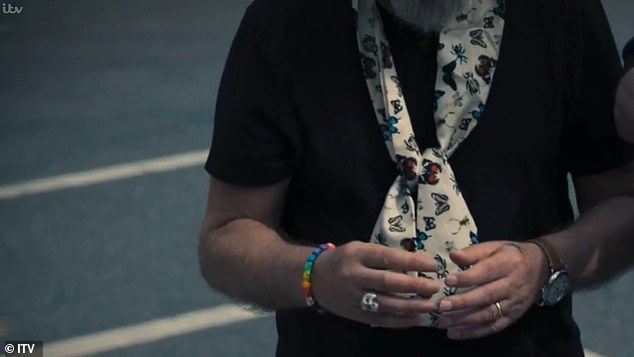 TV moment: Billy had to explain he had Parkinson’s, but made light of the question by adding: ‘It’s second best to playing the pipes’

Connolly’s first wife and Jamie’s mother, Iris Pressagh, suffered from alcoholism and died in 2010 at the age of 67.

Connolly was diagnosed with Parkinson’s disease six years ago and has spoken of the impact the disease is having on his life.

When he retired from stand-up, he said that he was struggling to cope on stage with live shows because of his condition. 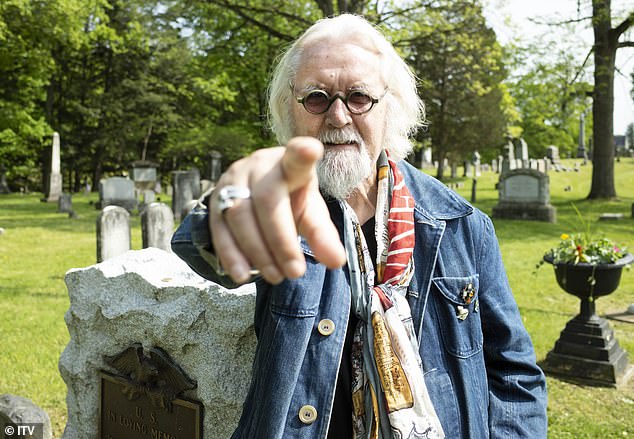 Comedian: The programme, Billy Connolly’s Great American Trail, is his comeback to TV after he quit stand-up due to his condition

He said he could no longer stride around the stage, like he used to, and Parkinson’s had made him become ‘rooted to the spot and afraid to move’.

Connolly spoke candidly about his condition in the BBC documentary Made In Scotland earlier this year.

He said: ‘There is no denying it, I am 75 [at the time of filming], I have got Parkinson’s and I am at the wrong end of the telescope of life, I am at the point where the yesteryears mean more than the yesterdays.

‘Because it is back there in my childhood and youth when I go to all those things that made me that live keenest in my memory now. My life, it’s slipping away and I can feel it and I should.’

He added: ‘I’m 75, I’m near the end, I’m a damn sight nearer the end than I am the beginning but it doesn’t frighten me, it’s an adventure and it is quite interesting to see myself slipping away.’

WHAT IS PARKINSON’S? THE INCURABLE DISEASE THAT STRUCK BOXER MUHAMMAD ALI

Parkinson’s disease affects one in 500 people, and around 127,000 people in the UK live with the condition.

It causes muscle stiffness, slowness of movement, tremors, sleep disturbance, chronic fatigue, an impaired quality of life and can lead to severe disability.

It is a progressive neurological condition that destroys cells in the part of the brain that controls movement.

Sufferers are known to have diminished supplies of dopamine because nerve cells that make it have died.

There is currently no cure and no way of stopping the progression of the disease, but hundreds of scientific trials are underway to try and change that.

The disease claimed the life of boxing legend Muhammad Ali in 2016.