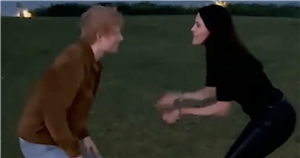 Courteney Cox and Ed Sheeran have sent fans on yet another nostalgia trip as they teamed up to hilariously recreate Ross and Monica's iconic dance routine from Friends.

The 56 year old, who has a close off-screen friendship with former co-star Matthew Perry, took to her Instagram feed to post the incredible clip for her 11.2million followers to see.

The raven-haired beauty could be seen dressed in a black top with dark skinny trousers alongside a pair of black shoes with white soles as she faced 30 year old Ed.

Shape of You hitmaker Ed had his game face on as he dressed up in a brown suede jacket, white T-shirt, light blue jeans and a pair red Nike trainers.

The singer started off the dance, which she originally performed with David Schwimmer, by pointing two fingers at Ed's eyes, then at Courteney's, before returning to his own as she counted: "Five, six, seven, eight."

Courteney, who recently took part in the "awkwardly magic" Friends reunion, then pretended to slap Ed in the face as they got into formation to slow-shimmy for the camera before Ed jumped over the actress.

They then both broke out into a "chicken dance", waving their elbows up and down in unison with their legs. Then they proceeded to do a wave with their arms as Courteney was spun around.

Ed and Courteney ended the comedic dance laughing as she ran up into his arms, expecting him to catch her, but they both fell to the ground.

In the caption, Courteney wrote: "Just some routine dancing with a friend… @teddysphotos #ReRoutine." She then took to her Instagram story to repost the clip before challenging her followers to do the dance as well.

"I got a friend to do the routine with me… can you? Post your videos and tag: #FriendsRoutine," she added.

Fans went wild as they watched the impressive performance as many went to the comments section to share their thoughts. One person wrote: "Now that’s a #routinechallenge!!" with a red heart emoji.

Another said: "two of my favorite people ever!! the ending killed me," followed by a skull emoji, as a third penned: "braking the internet once again and it seems perfect to me! you’re the most iconic EVER".

While a fourth added: "this made me laugh so hard even tho i’m still an emotional roller coaster because of the reunion".