Home » Celebrities » DAME JOAN COLLINS: My hell at the hands of the Covid Stasi

DAME JOAN COLLINS: My hell at the hands of the Covid Stasi 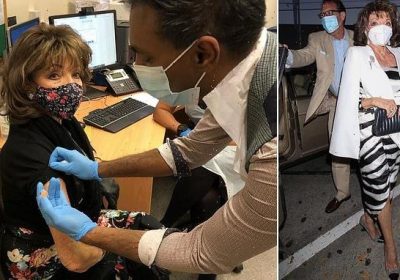 My hell at the hands of the Covid Stasi: Endless surveillance, constant phone calls… after her FIFTH quarantine, doyenne of stage and screen DAME JOAN COLLINS issues a cry of rage

Oh, no! Not again!’ I wailed as the phone rang and a strange, muffled voice announced: ‘This is your Covid Quarantine Officer. I’m at the door.’

Percy and I were up in our attic sorting through stuff and, though we scrambled hastily down the steps, didn’t get to the intercom in time.

We were grateful the man hadn’t left in a fit of pique and reported us to the Stasi because we weren’t standing by the door, anxiously awaiting his arrival.

When I picked up the intercom, I saw a young man in the video wearing what looked like a Metallica T-shirt and hoodie. He came up, asked my husband if he was who he was, asked to see his passport, flicked through his iPhone and left.

Throughout all this we complied meekly, not once challenging him to show his credentials, and smiled obsequiously for fear of incurring his wrath.

An hour later the phone rang, but we didn’t get to it in time. The missed caller list showed it was the by-now familiar ‘0300’ number the ‘Covid SS’ use. 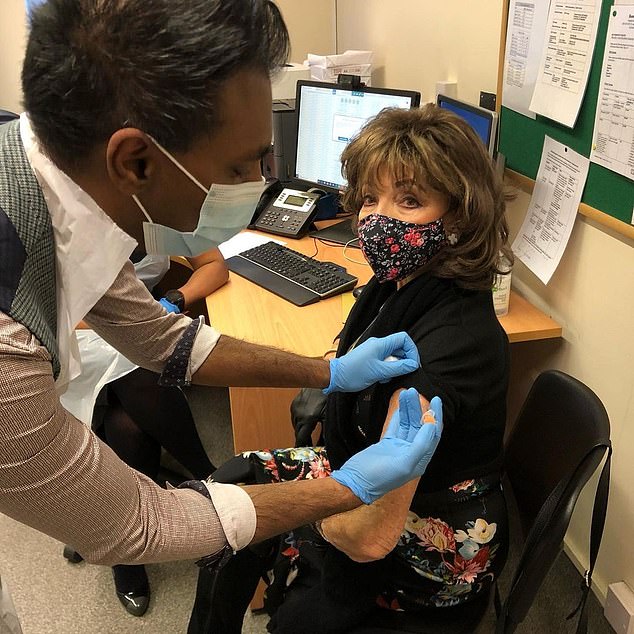 I have been double-jabbed for months now. I have quarantined four times since October and have tested negative about 30 times. I’m working because the bills haven’t given a hoot about the pandemic since it began. How much longer is this going to continue?

It was pointless calling back, we had learned during our last confinement, because it only reaches a recorded message that ominously states you were called and will be called again. When? No one knows. ‘No one expects the Spanish Inquisition!’

‘I hope they don’t think we’ve gone out?’ I said fearfully, having heard about a friend who was fined £1,000 for popping out to walk the dog at 6am. Her husband was fined £10,000 for saying she was in bed!

At 4pm another call came. This time a schoolmaster’s voice demanded my year of birth (something which rankles me at the best of times) and read a list of everyone who would be listening to the recording of our conversation.

An Uzi-like burst of questions followed: ‘Did I receive my test? Who did I get the test from? What was the result?’

I have been double-jabbed for months now. I have quarantined four times since October and have tested negative about 30 times. I’m working because the bills haven’t given a hoot about the pandemic since it began. 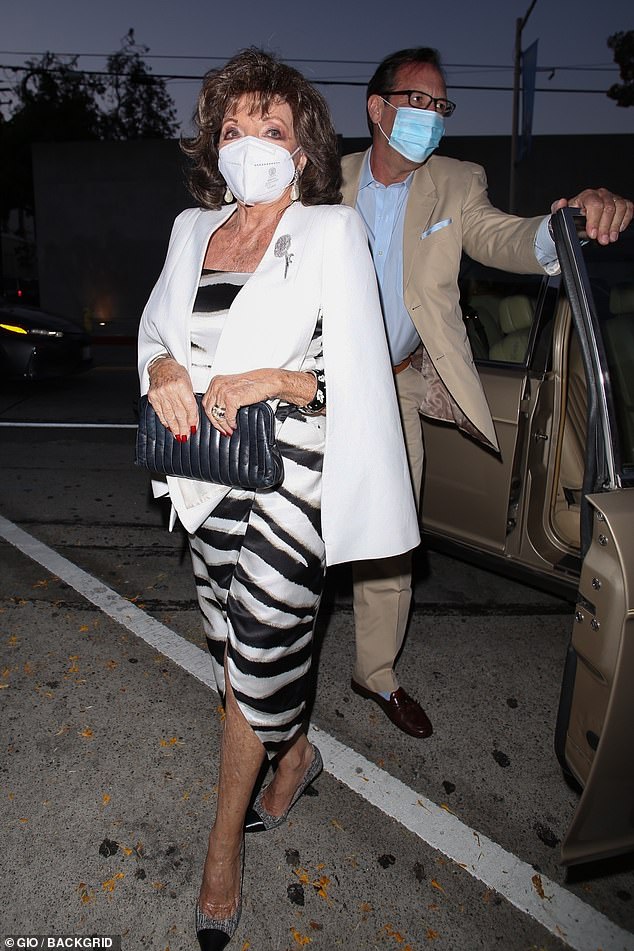 During the Clap For Carers, my husband and I went outside with our pots and pans only to be greeted by a dog barking indignantly about being awoken from its nap. I hope it’s being fed. Pictured: Dame Joan with husband Percy Gibson

During my quarantine in May, I received calls at the rate of three a day for five days — double that for my husband. That’s a lot of phone answering.

And that’s before worrying about being ‘grassed up’ by your neighbour. As regards this particular concern, fortunately I live in an area of London that is populated (or rather un-populated) by Chinese, Russian and Middle Eastern oligarchs who have parked their money in London real estate before their governments rip it out their cold, dead fingers.

During the Clap For Carers, my husband and I went outside with our pots and pans only to be greeted by a dog barking indignantly about being awoken from its nap. I hope it’s being fed.

How much longer is this going to continue? How long ago, it seems, were those Halcyon days of hope when our dear leader announced, in mid-April of 2020, that this lockdown would continue for two more months, until June! We were horrified; it was impossible, it was too harsh.

Well, that was pie in the sky compared to now. We’ve been fed false promises, great expectations and downright lies. Why were we promised freedom, yet our movements are still restricted?

I can’t help feeling resentful that I was meekly in quarantine when I discovered that our ex-Health Secretary Matt Hancock broke his own social-distancing rules to get to grips with his aide Gina Coladangelo in his office.

I can’t help feeling aggrieved that we’re making plans for thousands of fans and football fat cats travelling for the Euro finals when I can’t go to the grocery store.

So many rights that our democratic Britain has for centuries upheld — free movement, privacy, a life free from fear and persecution — have been eroded by this pandemic. So be it: in a crisis you expect certain sacrifices.

But there comes a time when the tide turns. Pandemics come and go, viruses burn out or mutate until they’re harmless, but democratic rights, for which people have fought hard for centuries, were given over in a nanosecond of fear and panic.

Now that more than 80 per cent of adults in the UK have coronavirus antibodies, why must we declare if our travel is ‘essential’?

The Prime Minister said last year the vaccination programme was the ‘cavalry’ coming to our rescue, yet now he only ‘thinks’ a double jab will open the door to foreign holidays without quarantine.

And horrid Angela Merkel doesn’t seem to want freedom. Not a month ago I was supposed to appear on a German TV show when the borders were shut with a day’s notice.

No consideration was given to the fact that I was fully vaccinated, tested negative the day before and only going for 24 hours. Now she is trying to rally the rest of the 27 member states to impose restrictions on the UK.

Most people on our fair isle have been as compliant as a six-year-old, with their tongues hanging out expectantly for a treat only to have it taken away by a wicked uncle.

I was extremely upset just before Christmas. My daughter Tara and I had been in talks to have a three-day celebration at her house in the country.

We had all overdone it in the gift department and were so excited to see each other after five months.

Boris had promised we could have a ‘merry little Christmas’ if we kept our gatherings small.

So, what did he do, once again? Break that sacred promise and make everyone stay at home, family-less, over Christmas. I was gutted.

Similarly, June 21, ‘Freedom Day’, came and went with another presentation of flowcharts and the usual soundbites: ‘Led by the science’; ‘data’; blah, blah, blah.

The carrot of a July 19 opening was promised, but now it’s uncertain, so no one can make plans to go abroad. And forget about the incorrectly termed staycations.

Several friends have told me it’s practically impossible to find a good hotel in any British seaside resort now.

Meanwhile, in France and Spain, tourist spots are begging for visitors after months of low attendance and haemorrhaging money.

But America stayed open, at least partially so. Florida even managed to have the fewest restrictions and the most success during the darkest days of the pandemic.

As of June 15, practically all rules have been lifted. Clubs, pubs, theatres, restaurants are all business as usual.

Yet in the UK, where we have a much better vaccine record, we remain constrained. My American friends are amazed we are still obeying such tough restrictions.

Ditto France, where antibody prevalence is nowhere close to ours and the sunny beaches of the Riviera are thronging with (mostly German and Belgian) tourists and everything looks normal.

No multiple-metre rule, no mask wearing outdoors and Gallic hugs and kisses abounding.

What family of four can plan a summer holiday when they won’t know if they can go until summer is almost over? And how can they afford the astronomical fees of all the tests needed?

In France, where only a lateral flow test is required, testing kits are available at pharmacies. It’s 15 minutes of suspense, as opposed to 24 to 48 hours until the results come back from a PCR.

In this, my fifth quarantine, I feel trapped, as if in prison for a crime I didn’t commit, with the Covid warden threatening to call or visit at all hours. On top of which our building is covered in workmen and scaffolding, so there is hardly any light or privacy.

It’s all a joke. The amount of money this Government has wasted checking that doubly vaccinated people are staying in their homes is obscene.

Stop promising rewards and then cancelling them, Boris! It’s got to stop.

Anyone with a brain knows Covid ain’t going to go away and that we need to live like free human beings again, and not frightened little mice. No offence intended to the rodent community.