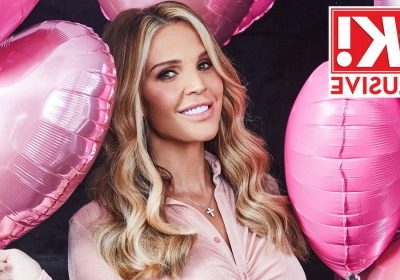 Mum-of-four Danielle Lloyd has made no secret of wanting a daughter and now, the star has delightedly confirmed to new! that her dream is finally coming true.

The 37-year-old is a mum to boys Archie, 10, Harry, nine, and George, seven, who she shares with her ex Jamie O’Hara, and Ronnie, three, who she has with her husband Michael O'Neill.

Danielle, who recently hit out at trolls for bullying her youngest son Ronnie, has exclusively revealed her gender scan results to new! – and as you'd expect, she's overjoyed.

"I’m over the moon. I can’t really believe it, to be honest," she says. "I don’t think it will feel real until she arrives."

The doting mother went on to explain how she and Michael first found out they will be welcoming a baby girl.

"We booked a private gender scan and I had such bad anxiety in the run-up," she said. "I’ve been through it four times and each time they’ve said it was a boy, so I was expecting them to say 'boy' again.

"And I videoed the whole thing and the doctor went on about the measurements and other things, and you can hear me going, 'Can you just bloody tell me?!'"

Danielle added that she burst into tears when the doctor revealed she and Michael will be parents to a daughter in the coming months.

"I felt sick. I couldn’t breathe on the way there," Danielle said. "It was excitement, nerves, everything. And then he handed Michael a bit of paper, which said, 'It’s 99% a baby girl.'

"I burst into tears straight away, I just couldn’t believe it."

The star also revealed that she's feeling totally "overwhelmed and excited" by the news.

"I’ve been getting the nursery ready and it’s the first time I’ve been looking for pink stuff," she saids. "The pregnancy’s gone really quickly actually, but because I’ve got four other kids to concentrate on, and we’ve had house renovations going on, I’ve had other things to think about."

Read Danielle's full interview – and see all the beautiful pictures from her gender reveal shoot – here.