Home » Dannielynn Birkhead, 14, Is So Grown Up In Turquoise Jovani Suit At Kentucky Derby With Dad Larry

Dannielynn Birkhead, 14, Is So Grown Up In Turquoise Jovani Suit At Kentucky Derby With Dad Larry 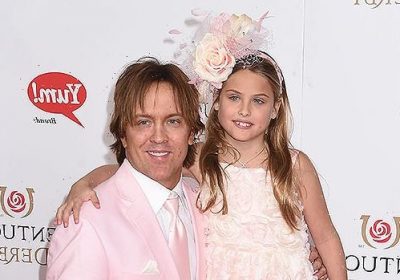 Dannielynn Birkhead ditched her usual dress for the Kentucky Derby this year, choosing a grown up suit and white floral fascinator for the event.

Anna Nicole Smith‘s daughter, Dannielynn Birkhead, is so grown up! The 14-year-old posed with her dad Larry Birkhead, 48, have an annual father-daughter tradition of attending the Kentucky Derby — but this year looked a little different due to COVID-19.  A day before the 2021 Derby, Larry and Dannielynn got all dressed up to head to the Churchill Downs race track.

The teenager looked so glam in a turquoise suit by Jovani, channeling the ’80s with big bold buttons. She added a rhinestone face mask to the look and a red lip. “Even though our favorite event The Barnstable-Brown Party won’t be back until next year, we decided to head out on this beautiful day to Churchill Downs racetrack in preparation for The Kentucky Derby,” Larry wrote.

“Dannielynn finished first in her @jovanifashions pant suit and a beautiful white flowered fascinator. She said she wanted to wear something entirely different than she had in the past. I guess that means no more ‘little girl’ dresses??” he quipped. “She cleaned out the chocolate brownies, ice cream and nachos while at the same time critiquing my outfit, the dad joked.

Back in 2019, the then 12-year-old looked so cute as she posed with dad Larry in a gorgeous pink dress by Junona! Dannielynn is the spitting image of her iconic mom, which many noted on social media. “Kentucky Derby time once again. Dannielynn looks pretty in pink in her dress by Junona and her Mom’s hat from her unforgettable appearance at The Kentucky Derby in 2004 #KentuckyDerby2019,” Larry tweeted, noting that the hat was the late Anna Nicole’s. How sweet!

As part of the event, the duo attended the 2019 Kentucky Derby Eve Gala which is held at Patricia Barnstable Brown‘s Louisville home. Dannielynn switched up her dress for the annual affair, opting to wear a bright yellow dress with pink floral details for the event — also by Junona. Dannielynn and Larry have attended the Kentucky Derby annually since 2010, which is the only public appearance they make annually. The event has particular significance as it’s also where Larry met Anna Nicole Smith years ago.

Larry, who has worked as an actor, model and photographer, has previously dubbed Dannielynn her mother’s “legacy.” Their likeness is undoubtedly uncanny, particularly their bright, wide smiles. The 14-year-old was just 5-months-old when Anna Nicole — who was known as a Guess? model and reality star — died of an accidental drug overdose on February 8, 2007.

The single dad has made an effort to keep his teenage daughter out of the spotlight, quietly raising her in his home state of Kentucky. “I think here in Kentucky is as normal as you can get,” Larry explained in a 2017 interview with Inside Edition. “She loves school. She loves her friends. I just hope that she dreams big and accomplishes a lot,” he also said. Shortly after, he also noted that he had turned down opportunities for Dannielynn to model because she “doesn’t show any interest in it” and she “wants to be a kid” to 20/20.

Larry made a rare appearance on an ABC special called Tragic Beauty that debuted nearly 14 years after Anna’s death. In the 20/20 episode, the father-daughter duo went through the late model’s old possessions that have been kept in storage. “She wanted to be a star; she wanted to be a mother; and Dannielynn is her legacy,” Larry’s voiceover said at one point during the broadcast.