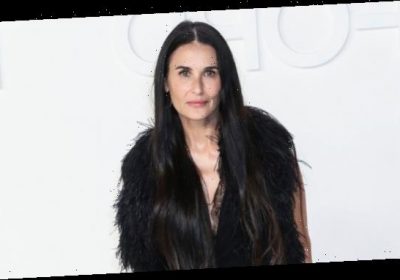 Demi Moore took to Instagram while doing some ‘early spring cleaning’ and showed off her stunning, natural beauty roughly one month after some called her unrecognizable at the Fendi fashion show!

Demi Moore looked as stunning as ever in her latest post to Instagram that she shared on February 25. In the snap, the actress, 58, sat on the floor of, what appeared to be, her closet, fashioning a casual pair of jeans and black sweatshirt with a design of mushrooms on it. Demi appeared to be rifling through some old clothes, and decided to put on a bit of a show for her more than two million Instagram followers by rocking an old leopard print beret and a pair of glasses.

The star raised up her hands and posed for the camera, showing off her stunning, smooth, natural beauty for the camera in the candid shot. “Early spring cleaning or a chance to play dress-up?” Demi captioned the cute snap, which her legions of fans simply fawned over. It’s only the second time that Demi posted on Instagram since fans saw the star open the Fendi fashion show for the Spring-Summer 2021 Haute Couture fashion collection in Paris at the end of January.

Upon seeing Demi hit the runway, fans immediately noticed that Demi’s face was dramatically made-up to give her a completely cosmetically altered look. Naturally, a slew of viewers had to wonder whether the look was permanent or not, and what the reason was behind the choice. Not to mention, what did Demi think about being told she looked “unrecognizable?”

Fortunately, the comments didn’t seem to bother Demi at all, and she focused on the incredible opportunity to hit the runway and fulfill a teenage dream. “Truly, it didn’t hit me until afterwards,” Demi shared with Naomi Campbell on her YouTube show No Filter. “It really was a teenage fantasy fulfilled. I took a moment where I thought….oh my God. I literally just walked a runway with some of the biggest models ever. I literally felt like a little kid.”

Demi was also joined by veterans of the modeling industry, including Naomi and Kate Moss! “It was very powerful,” Demi explained. ”It felt special for me because it felt less that it was entirely about the clothes and more that it was about the full story. It felt very magical and moving. It was extremely memorable.” Now that Demi has gotten a taste for the catwalk, we hope to see her hit the runway again in the near future!