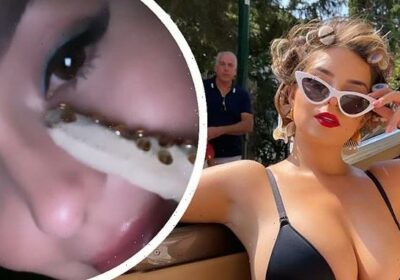 Demi Rose reveals she ‘likes girls and boys’, says she was the victim of ‘parental abuse’ and ‘hated’ her childhood in candid Q&A

Demi Rose spoke openly about her sexuality and her troubled childhood in a candid Instagram Q&A on Sunday.

The 27-year-old model, who found fame when she was romantically linked to rapper Tyga, has not previously discussed her sexuality but admitted to her followers that she is open to dating women.

Asked ‘Boys, girls or both?’ by a follower, she responded: ‘I went through a phase of liking girls more than guys. Now I’m more into guys. It just depends.’ 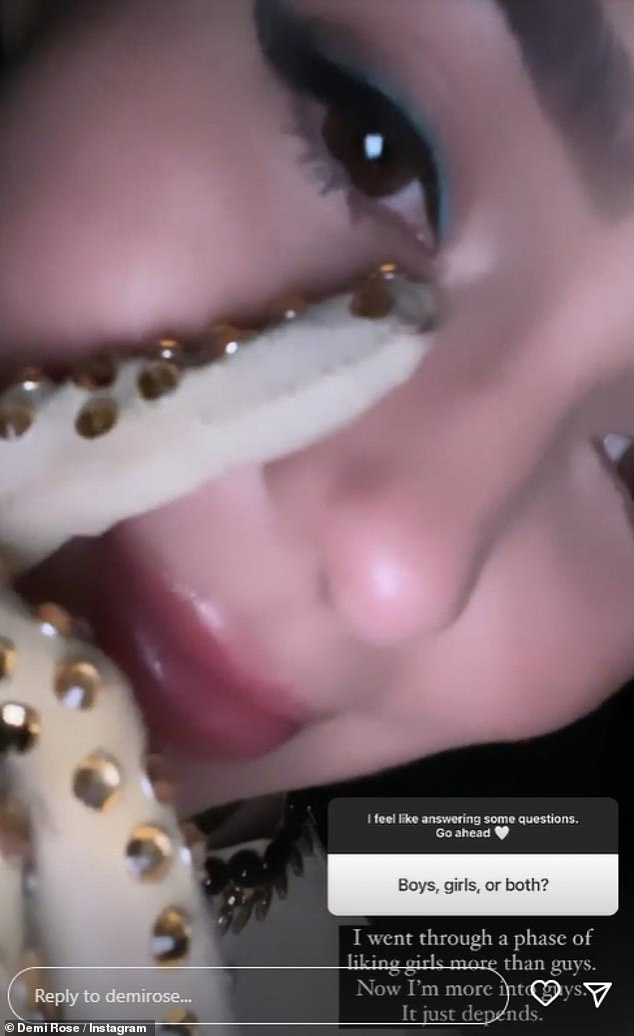 Speaking out: Demi Rose spoke openly about her sexuality and her troubled childhood in a candid Instagram Q&A on Sunday

Detailing what she’s looking for in partner she went on to share that she’s on the hunt for someone ‘inspiring, honest, well put together, a deep soul that’s open minded, kind, ambitious and thoughtful’.

The glamour model also reflected on her tough bringing in a series of candid statements.

In 2020, Demi revealed in a tearful video that she had dealt ‘with abuse as a child’ but clarified in her latest post that it had been ‘parental abuse’ that she suffered. 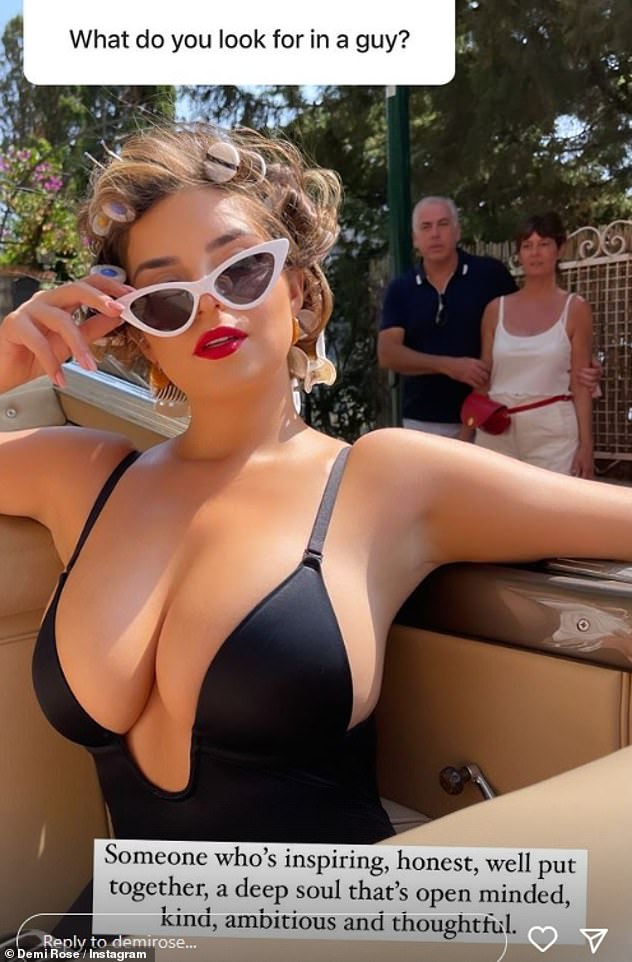 On the hunt: Detailing what she’s looking for in partner she went on to share that she’s on the hunt for someone ‘inspiring, honest, well put together, a deep soul that’s open minded’

She was asked by a fan ‘Growing up was it hard to be Demi Rose?’ to which she responded:  ‘Growing up it was very hard getting bullied in school, having parental abuse, and then at the age of 17 becoming a full-time carer for my mother who had a heart attack, which caused a stroke and she became disabled, wheelchair bound.

‘She was disabled for seven years and then both of my parents then passed away four years ago.

‘I get misjudged a lot but honestly those who meet me say I’m the nicest and that warms my heart.

‘I’m grateful for all the bad because it made me who I am I now have so much empathy for going through what I have.’ 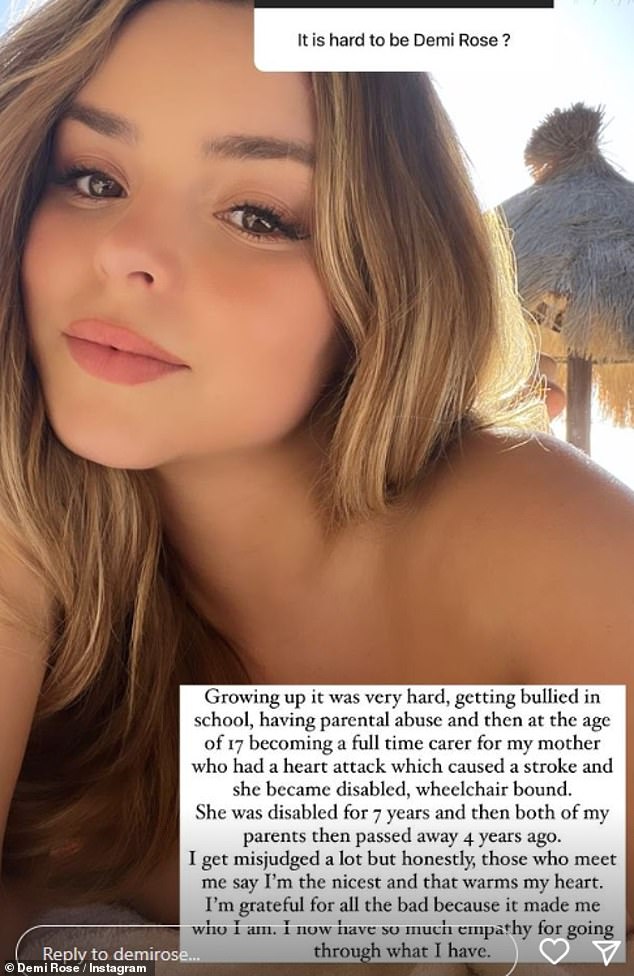 Speaking out: The glamour model also reflected on her tough bringing in a series of candid statements as she said she’d been the victim of ‘parental abuse’ 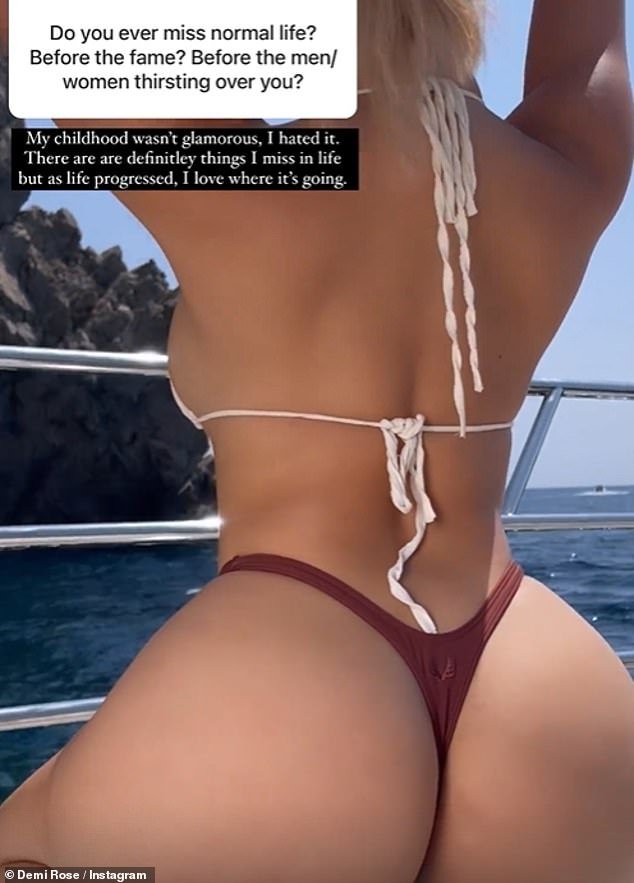 Traumatic: In another post she was asked if she missed her ‘normal life’ before finding fame, to which she responded ‘My childhood wasn’t glamorous. I hated it’

In another post she was asked if she missed her ‘normal life’ before finding fame, to which she responded ‘My childhood wasn’t glamorous. I hated it. There are definitely things I miss in life but as life progressed I love where it’s going.’

Back in 2020, Demi shared a series of statements on her Instagram Story where she emotionally revealed that she was abused as a child, bullied at school and hurt in relationships.

Looking forward: Demi said she’s ‘here’ for being a sex symbol as she shared a snap in a racy sheer top during her Instagram chat

She penned: ‘I feel it’s important to feel your emotions, understand them, let them out and experience them.

‘I like to think that whatever that may happen to me has happened for a reason. That I’m a vessel. So I can inspire and help those who have struggled too.

‘I haven’t opened up too much about my struggles because I have always still been dealing with them. I wanted to get to a strong place first to talk on them.’ 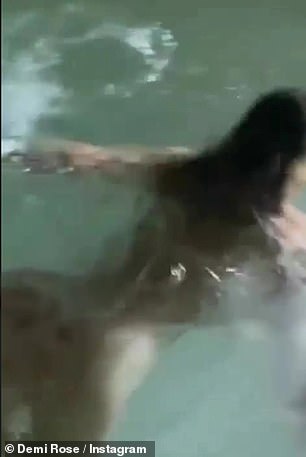 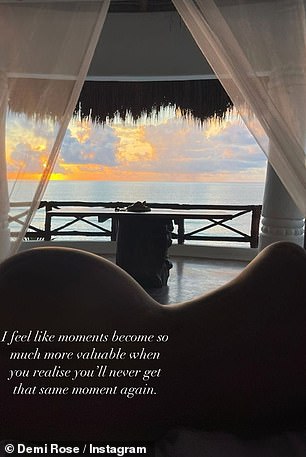 Stripping off: Demi also shared a video of herself skinny dipping and a naked snap in which she reflected on living in the moment

Demi explained: ‘From dealing with abuse as a child, to going through bullying at school, getting hurt by relationships that you never thought you would of and dealing with major grief, losing two people I loved the most.

‘To this day, I’m still trying to let all of that go but I’m acknowledging that all of that shaped me into who I am today.’

Demi concluded her statements with: ‘So here’s to picking yourself up, having faith in all that’s to come, remembering your core and your divine essence.

‘Before life happened we were innocent babies in a hopeful world. We knew no stress and we knew no hurt. We only knew love.’

The Instagram model explained how their deaths made her ‘grow up really fast,’ as she opened up about dealing with grief during the recording of her PrettyLittleThing podcast episode. 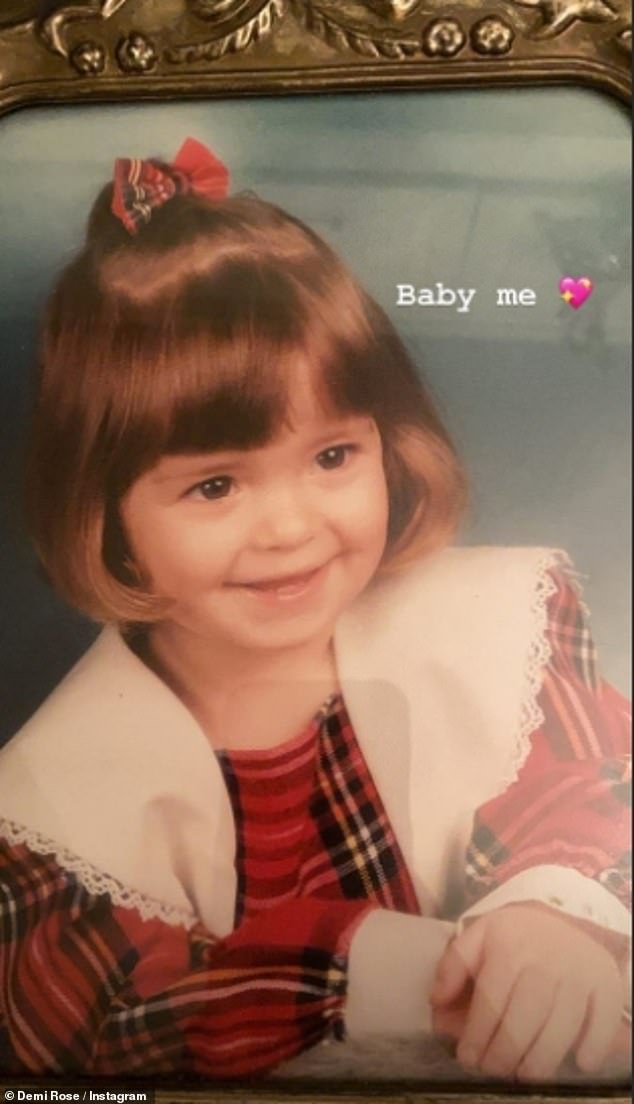 Heartache: The star previously revealed how she was forced to ‘grow up’ from a young age after her mother was left disabled following a heart attack

Demi said: ‘I’ve lost both of my parents, my dad cancer and my mum had a heart attack which caused a stroke when I was 17 and I was left as her carer as she was left disabled.

‘Then my dad passed away with cancer and then my mum then sadly passed away 7 months after him with a stomach infection, and it just made me grow up really fast and be really really strong about things.

‘And I think if I can inspire people by talking about grief, then you know if they can relate to me and they can understand it a little bit and I can help them then that’s important to me.

After experiencing the loss of both of her parents, Demi admitted: ‘I’ve gone through a lot, so I can talk on it.

Discussing how she copes with the loss of loved ones, she said: ‘It’s just part of life’s plan and you’ve got to be strong about it,’ adding: ‘I couldn’t have prayed for better friends.’