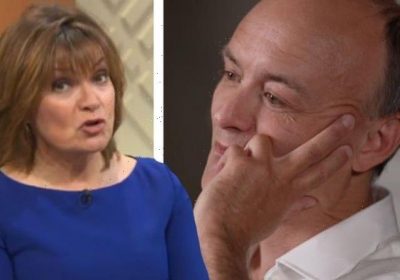 Dominic Cummings on plan to 'get rid' of Boris Johnson

Lorraine Kelly, 61, blasted Dominic Cummings’ first TV interview since quitting as one of his most senior advisers, where he sat down with BBC’s Laura Kuenssberg and dropped some real bombshells about the goings on in No 10. Replying to the news story and video interview posted by BBC on Twitter, the TV presenter wasn’t impressed with his conduct.

What a disgraceful shambles

“Cummings smirking virtually all the way through this interview was shameful and very very very annoying,” she snapped.

“What a disgraceful shambles.”

Lorraine added: “A parcel of rogues.”

The tell-all interview caused a right stir on social media, with fans rushing to the comments section to share their views.

It seemed there was a mixed reaction, with some adamant Cummings wasn’t telling the truth.

Responding to Lorraine, one said: “I fail to understand why the media is giving him a single minute of airtime, he was not elected by anyone, he was not fit for the role, and is now acting like a spoilt jealous ex-partner, if he said he was on fire and I saw the flames I would not believe him.”

Another added: “So hard to tell what is true or not. I would love to know what a body language expert made of him in that interview!”

“Not sure why anyone would want to listen to him? After all the lies he told who knows if its still all lies!” a third moaned.

While a fifth commented:”Agreed Lorraine. He looked very smug.”

Others however wondered whether there was anything to the claims.

“You never know what goes on behind closed doors…” one pointed out.

Another reasoned: “Right interviewee, wrong interviewer. To extract something of worth from Cummings needed an Emily Maitlis, not a Kuenssberg. Far too combative & ready to express her opinion in ways that didn’t draw him out. I think the BBC will look back at this & think a good opportunity lost.”

Among the variety of allegations Cummings made in the interview, he revealed he hasn’t spoken to Prime Minister Boris Johnson since he resigned last autumn but denied being motivated by revenge.

He admitted that people regarded him “generally as a nightmare”, but said it “doesn’t matter if people are upset” by attempts to reform government.

He said: “A lot of people have a pop at me, but you don’t see me crying about it.”

The PM’s former chief adviser was repeatedly challenged throughout his interview to back up his version of events with evidence, but he insisted many of his claims would be corroborated if there was a public inquiry into its handling of the Covid pandemic.

He went on to drop a huge bombshell that some of Boris’ closest aides decided he was unfit to be prime minister within weeks of his 2019 election victory and began plotting to oust him.

He also told the BBC it seemed that by mid-January 2020 the PM did not “have a plan”, and alleged his wife Carrie Johnson had tried to influence government appointments.

Cummings spoke about Brexit, for which he ran the Vote Leave campaign, but admitted that while he thinks it was a good idea and the right thing for the UK, anyone who expressed certainty about this “has a screw loose”.