Don’t Worry Darling has been at the centre of speculation after it was reported that Florence Pugh and Olivia Wilde clashed behind-the-scenes.

The rumour mill cranked up a notch when it was revealed that the Marvel star had limited her promotion of the film, due to her Dune 2 filming commitments.

Things took another turn after fans were convinced Harry Styles spit at Chris Pine during the film’s premiere, although this was later denied by reps.

But now, amid all the rumours, Libatique has cleared up anything actually going on and put the gossip to bed.

‘I have to say this was probably the most harmonious set I’ve ever been on,’ he revealed on The Hollywood Reporter’s Behind the Screen podcast. 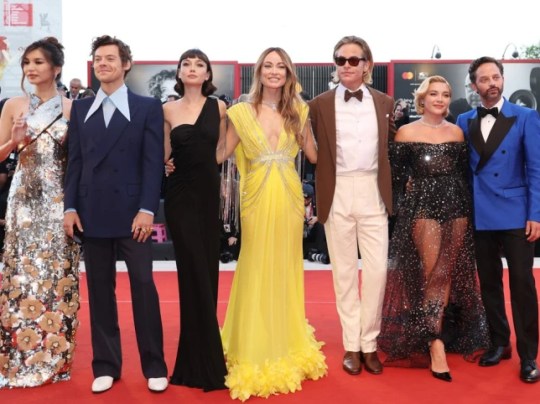 He continued: ‘Olivia built a team that believed in her and she believed in each and everybody on the set.

‘When I hear that there are rumours of acrimony on the set, I just reject it. It wasn’t apparent at all to be honest.’

Libatique added: ‘From my standpoint the stories are completely untrue when it comes to being on set, I can’t speak for post-production at all.’

‘It was really the most harmonious set I’ve ever been on,’ he repeated.

This comes after Pugh finally spoke out about all the gossip, as she shared a string of photos from Venice Film Festival on social media, but made sure to avoid any of the speculation that the thriller has been marred by.

‘I’m still taking it all in! Qwoaaar. What a moment this was? A massive congratulations to everyone standing on that carpet,’ she began. ‘We premiered in Venice! A huge wonderful win in itself.

‘I’d never been to Venice Film Festival before.. It was mega! The crowds! The cheers! The energy was incredible.

‘And to all the cast and crew who helped to make this movie, thank you for all of your hard work. We genuinely wouldn’t have been there without your talent and we appreciate it hugely.’

Although she tagged the rest of her castmates, including Wilde, and the official film account, she saved a personal shout-out for Chris.

‘I also just can’t help but post how bloody cute and hilarious Chris Pine is for being the no.1 photographer, getting down on white pressed trousered knees for angles.’ she added.

After Pugh was notably absent from the film’s press conference, Wilde attempted to quash any clash claims.

‘Florence is a force; we are so grateful she is able to make it tonight [to the premiere] despite being in production,’ she said.

‘As for all the endless tabloid gossip and noise out there, the internet feeds itself. I don’t feel I need to contribute to it.