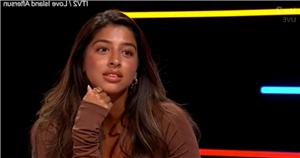 Shannon, 22, was clearly still reeling from the fact she was dumped from the Majorcan villa after a measly 48 hours after being left single when 25 year old Chloe picked Aaron.

And after reflecting on her time on the show and watching new events unfold on screen following her departure, the stunning OnlyFans star has now sensationally claimed that the blonde bombshell is "playing tactics".

When asked by Laura Whitmore who she thought was "playing a game" on Sunday's instalment of Aftersun, Shannon did not hold back.

She first whet the appetite of listeners, teasing: "I feel like some people are playing up to the cameras."

When pressed on who by host Laura, the brunette continued: "I mean, I do think Chloe's playing tactics. It's quite crystal clear to some people."

Shannon frustratedly added: "It's a game show, so it's to be expected."

She later said that she wished Chloe the best, but she "was not rooting for her".

Going on to detail the moment she found out she had been dumped from the villa, Shannon admitted that she had "no idea" and was "sitting there all smug".

"I thought I was gonna go on a date, and then I was told to pack my bags," she explained.

Since Shannon's shock exit on Wednesday, Chloe's family has pleaded with Love Island fans to "be kind" after hundreds of viewers sent her death threats.

Since the show started in June 2015, three stars associated with the show have taken their own lives partly due to the negative effect of online trolling on their mental health.

In a lengthy post on Instagram, Chloe's family shared an emotional statement which urged passionate viewers to stop leaving hateful messages after the loss of Milke Thalassitis, Sophie Gradon and Caroline Flack.

It read: “Morning everyone, Chloe’s friends & family here. We hate to introduce ourselves under such vile circumstances but we’ve had enough after just 3 episodes.

“We all have thick skin but the amount of trolling Chloe has been receiving is absolutely disgusting.”

They continued: “This morning we woke up to yet another DM (see next story) encouraging Chloe to kill herself – there have been HUNDREDS.

“Have the deaths of Sophie, Mike and Caroline taught us nothing?

“Not only that, but people are flooding her inbox threatening to kill themselves. People … this is a GAME show, there is a cash prize!,” they added.

“We understand the frustration surrounding @shannonsinghh’s eviction we feel it too!

“She didn’t deserve to leave so early but Chloe does not deserve to DIE because Shannon had to leave the villa! She will have had no idea of the repercussions of her decisions prior to making it. “

Chloe's family added: “We are not naïve. We know that this post won’t put an end to trolling. All the advice we get it to ‘ignore it’ and ‘block the trolls’ sometimes it’s not that easy.

“Our hope is that this just reminds some of you #BeKind x.”