Emily Andre is 'not confident' that lockdowns work to curb Covid 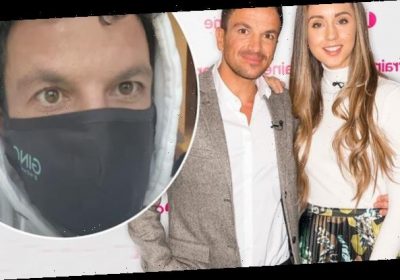 ‘The vaccine is our only hope’: Dr Emily Andre says she is ‘not confident’ lockdowns work and shares an update on Peter’s battle with the virus

Her husband Peter Andre has been isolating as he continues to battle coronavirus.

And Emily Andre has admitted that she doesn’t have ‘much confidence’ that the three Covid-19 lockdowns have actually ‘worked’ in curbing the spread of the virus.

The NHS frontline doctor, 31, said she thinks it is good that the Government ‘took action’, but added that not much has changed after nearly a year of lockdowns. 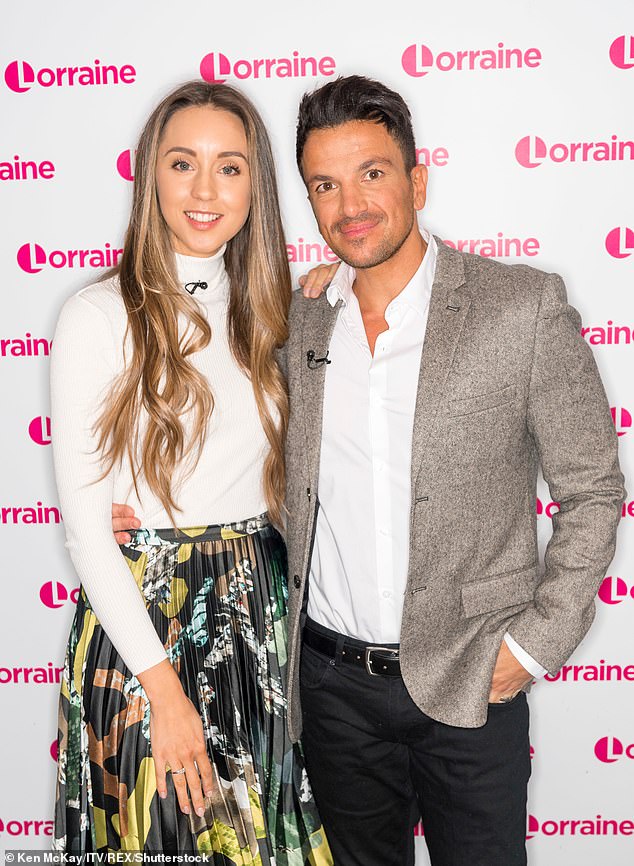 Uncertain: Emily Andre has admitted that she doesn’t have ‘much confidence’ that the three Covid-19 lockdowns have actually ‘worked’ in curbing the spread of the virus

Writing in her column for OK! magazine, she explained: ‘We’re in a national lockdown now and I think it’s good we’ve taken action, because things would have only got worse, but I don’t have much confidence that lockdown actually works.

‘We seem to have been doing it for nearly a year and not much has changed, but that’s not to say that I know what the right thing is, and I don’t think we have many options at the moment to prevent the NHS from becoming overwhelmed.’

Emily said that she instead believes that the Covid vaccine, which has started being administered to the elderly and frontline workers, is now our ‘only hope’.

But she was sceptical of the Government’s current target to inoculate 13million people by mid-February, which could require up to three million jabs per week. 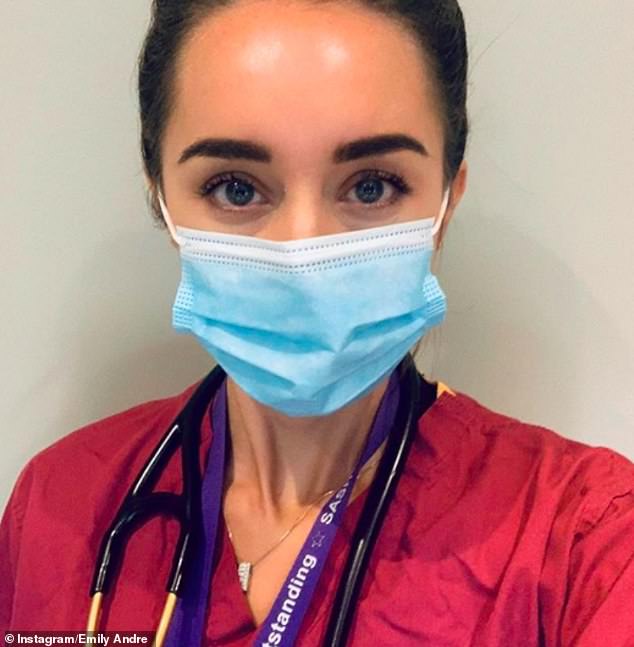 Does lockdown work? The NHS doctor, 31, said she thinks it is good that the Government ‘took action’, but added that not much has changed after nearly a year of lockdowns

The mother-of-two said that the current target seems ‘ambitious’ but was quick to add that she hopes the vaccine will be rolled out quickly to resume some normality.

She also gave fans an update on her husband Peter’s battle with the virus, explaining that at the time of writing the column, the singer had just received a positive result.

Emily said that Peter, 47, is currently isolating away from both her and their children to prevent the spread of coronavirus.

Quipping that he ‘knows a good doctor’, she continued: ‘Jokes aside, we are all keeping away from him and can’t wait to give him a hug when his self-isolation passes.’

Peter first revealed that he had contracted Covid-19 last week, saying on Monday that the virus had left him wanting to sleep constantly. 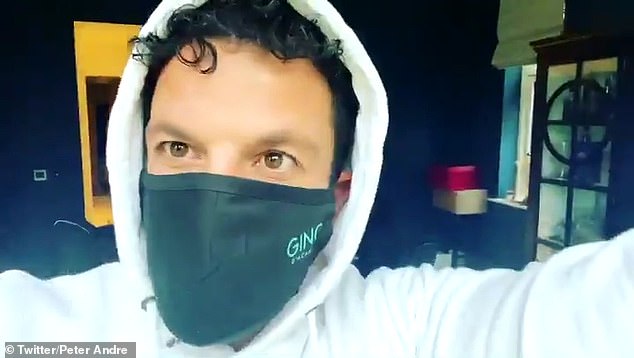 Covid: She also gave fans an update on her husband Peter’s battle with coronavirus, explaining that at the time of writing the column, the singer had just received his positive result

He shared a clip of him slumbering at home as he provided fans with an update on his battle with the contagious virus.

The star captioned the clip: ‘One thing I will say with this virus. It makes you want to sleep, sleep, sleep.’

In the video, the Mysterious Girl singer, who was wearing a face mask, was seen sporting a white hoodie and jeans as he rested on the sofa.

His celebrity pals Vicky Pattison and Kerry Katona, who have themselves contracted the virus, were quick to send well-wishes to Peter.

Vicky, 33, wrote: ‘Me and Ercan have had it over Christmas and new year Pete and honestly mate, walloping about 16 hours a day sleep we were in the thick of it! Get well soon buddy x.’ 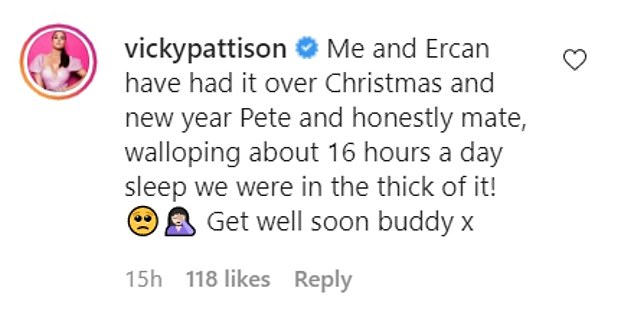 Get well soon: Celebrity pals Vicky Pattison and Kerry Katona, who have both contracted Covid, were quick to send well-wishes after Peter announced he had the virus

The singer had previously kept quiet about Covid, instead posting presents and balloons for his daughter Amelia’s seventh birthday on Thursday, but was said to be feeling ‘extremely tired’.

He reportedly began feeling unwell a few days previously but did not suspect that he had caught the contagious virus.

Peter’s representatives told MailOnline at the time: ‘Peter has Covid but is coping ok at present.’

Meanwhile an insider told The Sun: ‘Peter started feeling unwell a few days ago, but he didn’t suspect that he had Covid, despite feeling extremely tired and unwell. 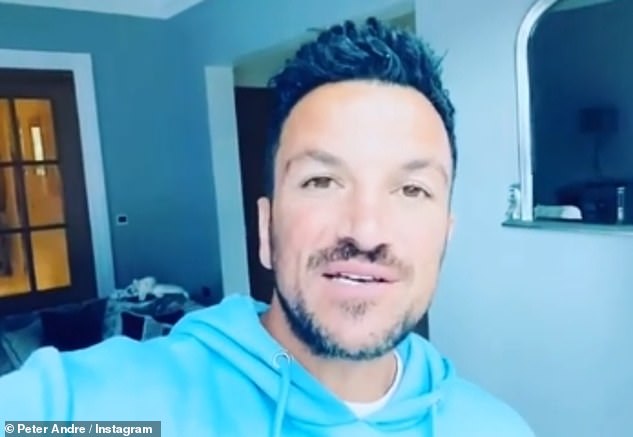 Secret battle: Peter first revealed that he had contracted Covid-19 last week, saying on Monday that the virus had left him wanting to sleep constantly

‘But he decided to go for a test to make sure as he started feeling very weak, which is unusual for him and he struggles to breathe sometimes.

‘Because Emily is working and the UK is in lockdown, Pete has no option but to look after his four children as normal and isolate away from Emily at home.

‘There’s no-one else to look after the children and he doesn’t want to put anyone else at risk of catching it.’

The insider added that the family – Pete and Emily’s two kids; Amelia and Theo, four, and Peter’s kids with ex Katie Price Princess, 13, and Junior, 15 – are in quarantine. 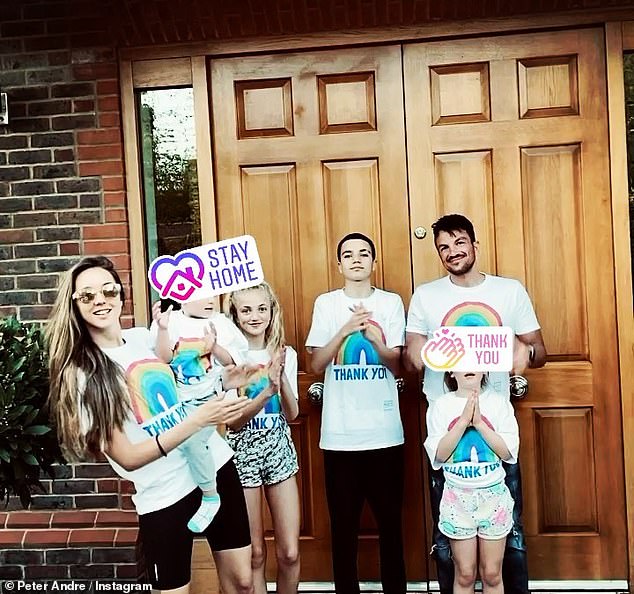 While Pete remained quiet about the state of health, he did upload an Instagram showing the presents and balloons for Amelia’s birthday.

The singer had splashed out on a new purple bike and had lovingly gift-wrapped her presents with white bows.

He wrote: ‘Happy 7th birthday to my beautiful, kind and incredibly clever daughter Amelia. Love you to the moon and back …..and back.

‘It’s going be a quiet one but still as special as ever even if it’s distanced ps thank you to @tofclass_ for delivering our balloons at such short notice. Amazing.’

It comes after Pete shared his heartache about not being able to visit his elderly parents during the pandemic. 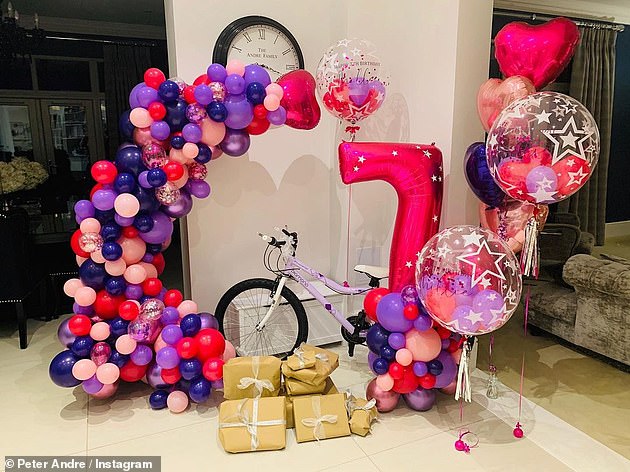 Unwell: While Pete had remained quiet about the state of health, he did upload an Instagram showing the presents and balloons for Amelia’s birthday

Before he fell ill with Covid, the singer revealed he begged the Australian embassy to let him visit his elderly parents due to the country’s strict travel rules.

In his New! Magazine column, the musician insisted it’s his ‘number one priority’ to travel to see his dad Savvas, 87, and mum Thea, 84, who currently ‘isn’t very well’.

The father-of-four said: ‘I actually contacted the Australian Embassy because there are special circumstances whereby family members can fly over, but sadly I don’t fit the criteria.’

TV personality Peter expressed his hopes to meet up with his beloved relatives as he added: ‘My number one priority this year is to go and see my mum and dad in Australia, as I miss them too much. 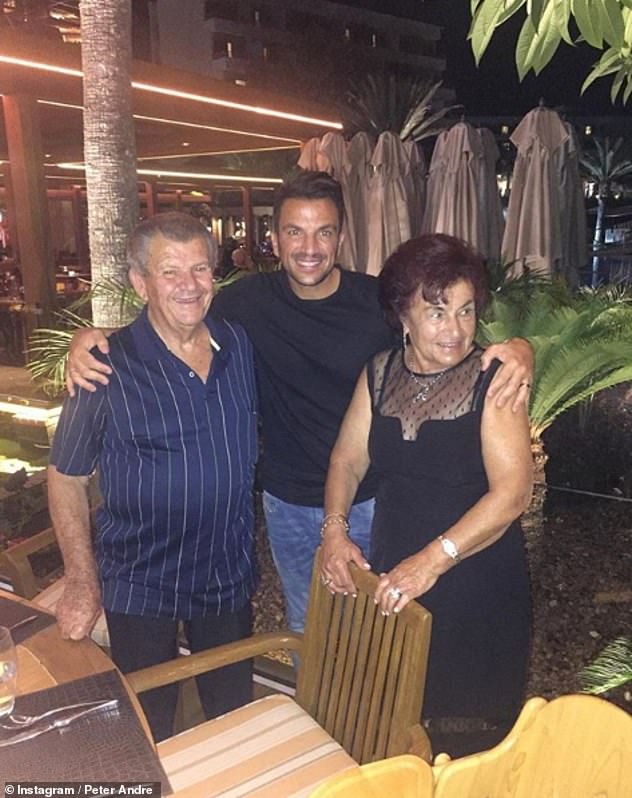 ‘I miss them’: Before he fell ill with the virus, the singer revealed he begged the Australian embassy to let him visit his elderly parents due to the country’s strict travel rules

‘I’m anxiously awaiting the borders opening as it’s been upsetting not seeing them, especially as my mum isn’t very well.’

While Pete has been homeschooling his children, Emily has been working on the frontline.

She said in her OK! Magazine column: ‘I didn’t quite shed a tear like Health Secretary Matt Hancock but I thought it was quite sweet he got emotional on Good Morning Britain 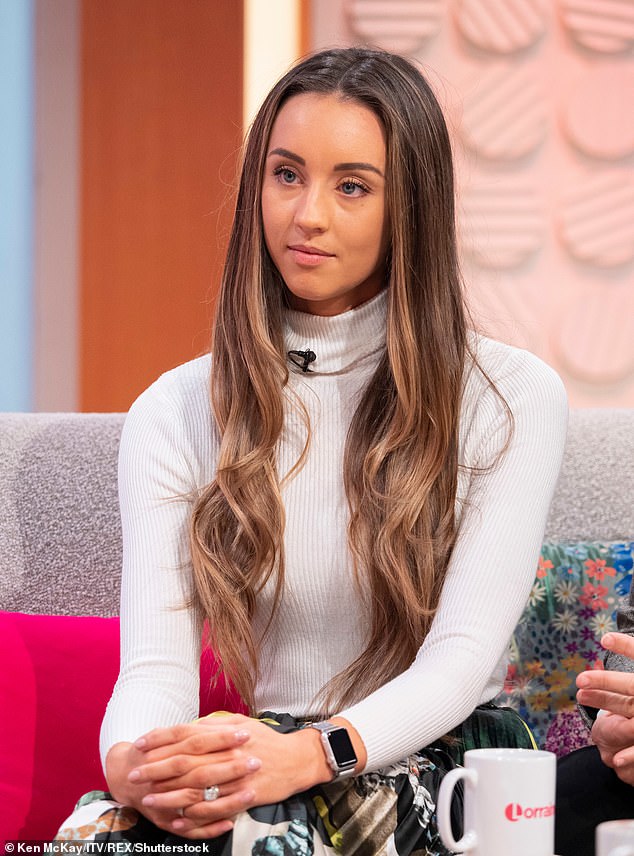 ‘He must have had the worst year of his life at work after being interrogated and slated so he must just feel relief that there is light at the end of the tunnel.

‘It also shows people that he does actually care as I know that’s often been questioned.’

Back in June, Emily revealed she had tested positive for coronavirus, but says that does not mean she now has immunity.

She said she had suspected she had caught the disease and had protected her family by quarantining herself away from husband Peter and their children. 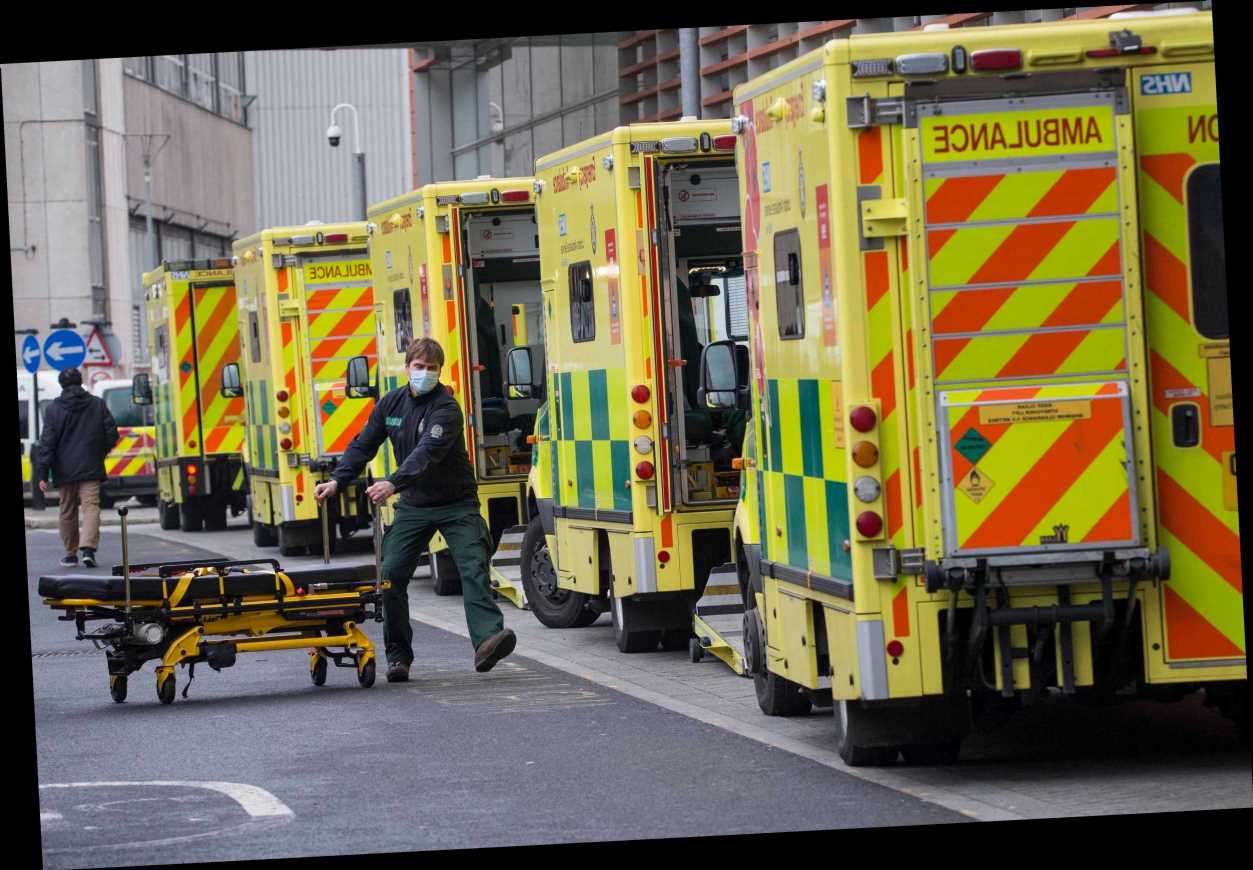