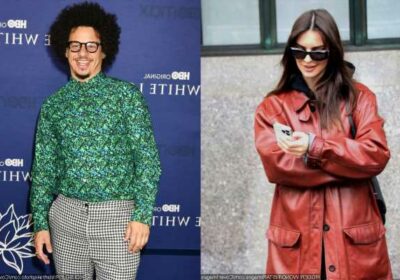 The 31-year-old Inamorata founder and the comedian are photographed having a hot makeout session while enjoying their moment together during their beach getaway.

AceShowbiz –Emily Ratajkowski and Eric Andre are not holding back during their romantic vacay in Grand Cayman. The pair were photographed fully enjoying their moment together as they made out on Tuesday afternoon, January 24.

In some pictures that circulated online, the “Gone Girl” actress and the comedian were seen packing on PDAs as they were lounging while facing the ocean in the largest island of the Cayman Islands. They were also pictured sipping what seemed to be pina coladas during the relaxing outing.

At one point, they got intimate as the 31-year-old model had her arms wrapped around Eric’s neck. The Inamorata founder also leaned in to give him a big kiss.

According to Page Six, the two are staying at the ritzy Palm Heights and have been vacationing together “for a few days.” An eyewitness spilled to the news outlet, “Emily and Eric were looking pretty cozy on the beach, lounging by the waterfront. They were kissing and flirting. He was cracking jokes and making everybody laugh.”

The source added that they appeared more “playful” than “romantic.” The insider went on saying, “It seemed like a fun friends-with-benefits situation. They hung out at the bar, drinking cocktails and chatting with everyone. They just seemed really happy and relaxed together.”

It was also said that Emily, who split from his “serial cheater” husband Sebastian Bear-McClard last year, told Eric that she’s “traumatized by men” and even shared one particular “horror story.” The insider added, “Eric was acting surprised, saying, ‘That guy really did that?’ “

The vacay arrived after Emily was seen attending the Knicks game with Seagram heir Eli Bronfman on January 11. During the outing, Emily, who was previously rumored to be dating Pete Davidson, opted to look casual in a white tube top, baggy pants and an oversized jacket.

In one picture, the “My Body” author’s eyes apparently locked on him while she enjoyed a glass of beer. It was unknown if they came together or just simply enjoyed a conversation while watching the game.