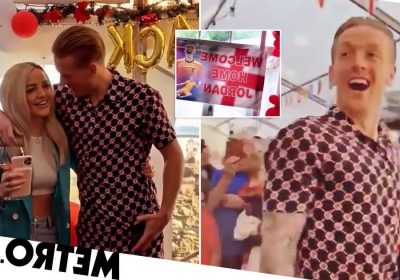 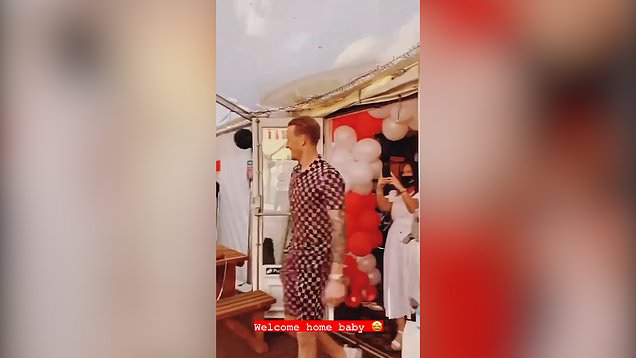 England goalkeeper Jordan Pickford was given a hero’s welcome home by his wife Megan Davison, his friends and family after the team’s defeat in the Euro 2020 final.

Italy claimed the title on Sunday after Jadon Sancho, Marcus Rashford and Bukayo Saka missed their penalties in a tense shoot-out after a 1-1 draw after extra time.

While it was a crushing blow to the Three Lions, Pickford had an impressive tournament, letting in just two goals during the Euros – one in their semi-final against Denmark and one in the final – and maintaining five clean sheets.

After spending weeks away from his family in England’s bubble at St George’s Park, Pickford made a triumphant return to Cheshire, where Megan and the goalie’s friends and family threw a welcome home party.

In videos shared to Megan’s stories, a crowd of loved ones sang Neil Diamond’s Sweet Caroline, with Pickford beaming as he entered the gazebo.

The venue was decorated with red and white balloons reading ‘We are so proud, well done’, while other balloons spelled out ‘England 1’ and ‘Welcome back’. 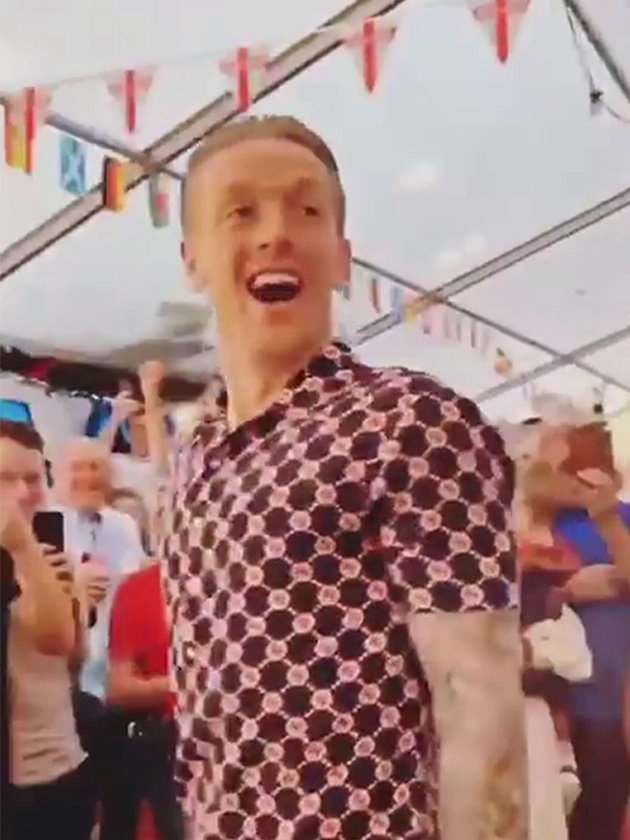 There were also the flags of all the competing European nations draped across the ceiling, while a large banner with pictures of Pickford read: ‘Welcome home Jordan.’

Guests were also given masks of Jordan’s face to wear, while the footballer’s two-year-old son Arlo decided to dress as Spider-Man for the occasion.

The WAG, who went to school with Jordan and has dated him since they were 14 years old, added on her stories: ‘Welcome home baby.

‘Thank you so much to JP’s boys for arranging this for him, and well done for pulling the surprise off.’

Megan wore a white crop top under a turquoise blazer paired with jeans and white heels for the party, and posed for pictures with her husband before donning a mask of his face.

Jordan and Megan got married last March at a register office in Crewe after a decade together, accompanied by five witnesses and their then one-year-old son, with Pickford donning a pair of ripped jeans and a baseball cap for the 25-minute ceremony.

Megan has been an avid supporter of her husband’s career, even moving to Liverpool with him when he signed for Everton, and was present at all the matches at Wembley during the Euros.

Following England’s defeat on Sunday, she penned a sweet note to Pickford on Instagram, writing: ‘No words to say how proud I am of you and everything you have achieved, what a tournament, now let’s get home for our baby boy after 6 long weeks.’

Pickford’s teammates Harry Kane and Harry Maguire were also welcomed home with parties thrown by their friends and families.

After the match, the team united to denounce the racist abuse aimed at Sancho, Rashford and Saka, with Tyrone Mings accusing Priti Patel of ‘stoking the fire’ by claiming the team’s taking of the knee was ‘gesture politics’.