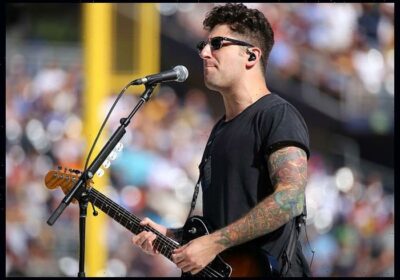 Fall Out Boy guitarist Joe Trohman has announced a temporary break from the band ahead of the release of their new album to focus on his mental health.

“Without divulging all the details, I must disclose that my mental health has rapidly deteriorated over the past several years,” Trohman said in a statement he posted on the band’s Instagram. “So, to avoid fading away and never returning, I will be taking a break from work which regrettably includes stepping away from Fall Out Boy for a spell.”.

The news came within hours of the rock band announcing that their new album, So Much (For) Stardust, will be released on March 24.

“It pains me to make this decision, especially when we are releasing a new album that fills me with great pride (the sin I’m most proud of),” Trohman wrote. “In the meantime, I must recover which means putting myself and my mental health first.”

The guitarist expressed gratitude to his bandmates, family and fans for “understanding and respecting this difficult, but necessary, decision.”

Fall Out Boy originated from Chicago’s hardcore punk scene and was formed by Trohman and Pete Wentz as a pop punk side project in the early 2000’s.