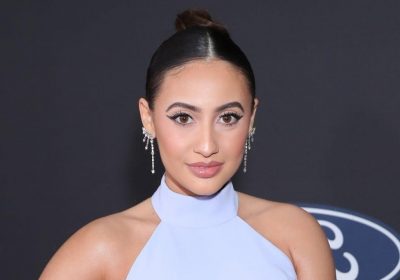 The 32-year-old actress opened up to ET’s Leanne Aguilera about getting the chance to incorporate important Latinx topics on the fourth season of the Freeform show. The show has been touching on the Black Lives Matter movement, and the new episodes will take a look at immigration and the U.S. policy Deferred Action for Childhood Arrivals (DACA).

“I did have conversations with the writers prior to the season because we were touching on Black Lives Matter and the writers are amazing. They’re always welcoming us in the room and open to any suggestion,” Raisa tells ET. “So I went to Julie Bean, our showrunner, and I said, ‘You know, I’m huge about DACA and I’m huge about immigration. Can we incorporate it in some way?’ And you’ll see later on in the season that we did.”

Additionally, fans have seen Raisa’s Ana Torres getting cozy with Javi (Henri Esteve). The two bring their cultural backgrounds to the show, speaking in English and Spanish to one another.

The Spanglish back and forth is something Francia says came organically from their conversations while on the set.

“When Henri got hired — and he speaks Spanish and he’s actually Cuban, I’m not — I was learning a lot more about the Cuban culture with him,” she shares. “We just started speaking Spanish to each other and the writers really welcomed it.”

“The director would come sometimes and be like, ‘Alright, we’re going to do one take in English, one take in Spanish, if you’re OK with that?'” Raisa recalls. “Like, yes, please! So I was very, very happy about that. And I’m glad that I got  to showcase that a lot more this season.”

With season 4 officially in full swing, on the premiere episode, viewers saw Ana and Javi reconnect while in Mexico. The two, however, also got into an intense argument. What will the future hold for these two? Only time will tell.

Raisa previously spoke with ET about filming her first sex scene with Esteve, describing it as “so technical that I was just making sure that I was able to do the right things for camera angles.”

“Both Henri and I were just tired because you have to shoot it over and over and over again and I was just trying to make sure that my abs came through,” she said, adding that it was a closed set.

Hear more of what she said in the video below. Grown-ish airs Thursdays on Freeform.