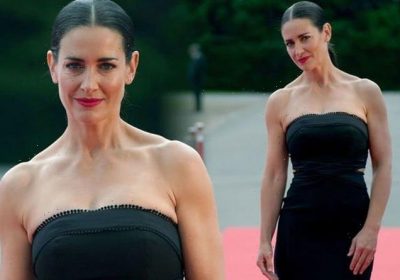 Kirsty Gallacher, 45, headed to Scotland this week to attend the Pride of Scotland Awards, honouring the nation’s unsung heroes. The television presenter hosted the event, which took place at Hopetoun House in South Queensferry, with Scottish radio star Nicky Campbell.

The Edinburgh-born star looked stunning for the award ceremony in a strapless black gown, with cut out details at the side.

The figure-hugging number clung to her curves to showcase her incredible figure.

Kirsty teamed her full-length frock with a pair of coordinating black heels.

She wore her brunette tresses in a sleek low ponytail and enhanced her natural good looks with elegant make-up.

“I’m absolutely emotional and so thrilled to be here,” the 78-year-old said as she walked the red carpet.

Martel Maxwell, star of Homes Under The Hammer, was also in attendance.

She donned an off-the-shoulder red dress for the occasion.

Ahead of the event Kirsty took to social media to share some behind-the-scenes snaps with fans.

She posted a picture of her name on her dressing room door in view of her 352,000 followers.

The mum-of-two, who is the daughter of Scottish golfer Bernard Gallacher, later snapped a selfie as she got ready for the event.

Kirsty could be seen holding a mirror as a make-up artist applied a slick of pink lipstick.

The Pride of Scotland Awards honour men, women and children for their kindness, acts of bravery and charity work.

It recognised 11 incredible winners on the night, including Lily Douglas, 13, who won the Teenager of Courage Award.

The dance enthusiast is battling a rare form of cancer.

“I can’t think of anyone that deserves this award more than yourself. I love you and can’t wait to see you again,” said Alesha Dixon of the youngster.

Sir Kenny Dalglish and Sir Cliff Richard honoured Gerard Morrison with the Outstanding Bravery award, after he fought off a knife-wielding thug and saved a woman’s life.

As did actor Martin Clunes and former footballer Steven Gerrard.