The girl from Durham who bunked off school to wow America Courtney Hadwin, the British 13-year-old who this week took America’s Got Talent by storm, may only be a slip of a girl, but she can pull the wool over people’s eyes when needed.

In March, when Courtney needed a few days off school to fly to Los Angeles for the show’s auditions, she told friends she had a tummy bug. But the white lie has paid off spectacularly for the shy girl from Hesleden with a larger-than-life voice — and, presumably, her teachers didn’t mind the subterfuge once the truth came out.

The city of dreams is a long way from the former pit village in County Durham where Courtney lives with her dad Paul, 32, mum Annmarie, 31, and two siblings. 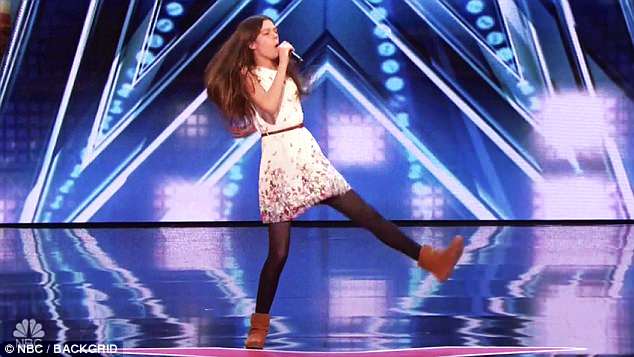 Courtney Hadwin (pictured), the British 13-year-old who this week took America’s Got Talent by storm

But a dream is what Courtney flew across the Atlantic to pursue, hoping to get through the first round of the Stateside cousin of Britain’s Got Talent.

It’s safe to say no one expected much from the girl in the floral dress when she walked on stage: it looked like she wanted the ground to swallow her whole.

But then, she started to sing — and any fears that the viewer might be in for a few minutes of toe-curling embarrassment on her behalf were blown away. She was, quite simply, astounding.

No schmaltzy ballad, no bubblegum pop affair: Courtney sang Hard To Handle by the Sixties King of Soul himself, Otis Redding. Not an easy choice, but she gave it a stirring twist all of her own.

Her rendition had more of the young Tina Turner or Carole King about it than a wannabe from Hartlepool and earned a standing ovation from the judges. Simon Cowell looked particularly impressed.

Courtney topped it off by getting a judge’s ‘golden buzzer’, taking her straight to the live final performance round in August. If she comes first — bookmakers have already slashed the odds on her being crowned the winner — it would mean a $1 million (£750,000) prize and, almost certainly, a record contract.

Not bad for a schoolgirl from a modest background: dad Paul is a delivery driver, while Annmarie is a stay-at-home mum to Courtney and her siblings, Paul, nine, and Melissa, seven. The family live in a small, semi-detached house on a quiet street.

Little wonder that Courtney is still trying to take in the fact that she has set the internet alight (put Otis Redding into a search engine and her name pops up).

‘It doesn’t feel real,’ she smiles. ‘Even at the time, it didn’t feel real — it felt like I was watching myself on TV. It’s weird.’ 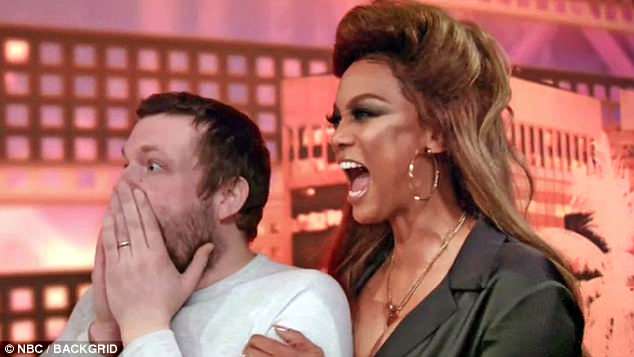 Courtney topped it off by getting a judge’s ‘golden buzzer’, taking her straight to the live final performance round in August. Picture: Her dad Paul and host Tyra Banks

At least she can talk about it now, having kept the trip under wraps for four months. She must have been itching to tell her pals. ‘It’s been really hard,’ she admits. ‘It’s good to be able to be open about it now. My friends have been really understanding. I’ve had loads of messages saying they’re proud of me, which is lovely.’

Not that Courtney is naturally much of a talker, says Paul. So where did her voice come from? Surely such a talent must have been passed down?

The answer seems to be that it came from nowhere: neither of her parents, childhood sweethearts who married when they were 18, are singers. Brother Paul is all about football, while sister Melissa prefers reading.

‘I’ve been singing since I was really little,’ shrugs Courtney. ‘I don’t really know why, I just liked it. But I only started practising properly when I was nine.’

Back then, Courtney admits to liking traditional ballads. ‘I used to stand still and just do ballads, but then I got into James Brown and Janis Joplin,’ she says. ‘I saw a video of James Brown singing I Feel Good and it just went from there.’ Quite why she’s drawn to soul she struggles to say, but it is ‘fun and quirky’. ‘People at school are listening to Ed Sheeran and Little Mix. I like them, too, but I don’t like singing them.’

Dad can’t explain it, either. ‘It’s all her — her and YouTube,’ he says. ‘I don’t know where it comes from. She’s a different person when she sings.’ He is proud as punch of the girl he calls ‘Courtz’. His Facebook page is full of home videos showing his daughter blossoming into the secret soul diva who stood on stage in LA.

In one video, when she’s about ten, she wears a fluffy Hello Kitty dressing gown in her bedroom. She looks like she wouldn’t say ‘boo’ to a goose, yet already, the poise and confidence when she starts to sing are there.

There are films of her singing in church and in the musical Matilda at school — a local state specialising in performing arts.

Is this evidence that behind the scenes are pushy parents drawing up her showbiz master plan?

Not a bit of it, insists Courtney. ‘They’re very supportive and, if I want to do something, or don’t want to, that’s cool with them — they just listen to what I have to say, but they’d never get me to do something I don’t want to.’ It was, in fact, her idea to audition for last year’s The Voice Kids UK, after producers approached her school. She was a natural, and performances including David Bowie and Mick Jagger’s Dancing In The Street got her to the final. She narrowly missed out on the title, won by teen Jess Folley.

‘Everyone was lovely,’ recalls Courtney. It clearly gave her a taste for performing in front of crowds, giving her the courage to take part in local music festivals — one alongside Sister Sledge.

Still, it’s a leap from there to crossing the pond for an audition: why not ease herself in with the British version? ‘It’s the biggest show in the world and America is where all my idols are from, so I thought: ‘Why not?’,’ she says. ‘My parents were a bit shocked.’

Not least, one imagines, by the airfare. In March, father and daughter arrived in LA for four nights. Courtney says: ‘I’ve watched these people on TV since when I was young, so to stand in front of them was surreal — and a bit nerve-wracking.’

As we now know, she really needn’t have worried: Cowell said she sang ‘like a lion’, while fellow judge Howie Mandel — who gave Courtney the golden buzzer — described her as of ‘a whole different era’.

Is she in danger of becoming a diva? ‘No way,’ she laughs. ‘My parents wouldn’t let me.’ They’re more likely to scold her for not tidying her room. ‘Mum always tells me off for having clothes on the floor,’ she admits. Meanwhile, the family’s celebration of her success extends to a takeaway.

For now, she remains blissfully unspoiled. Courtney says while she wants to be a singer, if it doesn’t work out she’d happily be a vocal coach or music teacher.

Given the buzz around her, it’s more likely, I suggest, that when we next speak, she’ll be wearing a fur coat and sipping champagne. ‘Oh, I don’t know about that!’ she says. ‘I just like singing.’