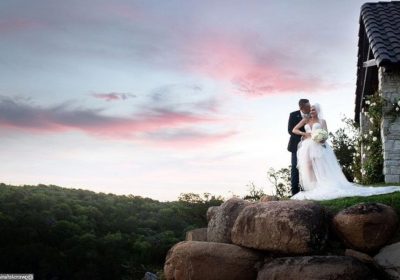 Confirming she tied the knot with the ‘God Gave Me You’ singer on Saturday, July 3, the No Doubt frontwoman posts on Instagram photos from their intimate nuptials.

AceShowbiz –Gwen Stefani and Blake Shelton are sharing their happiness after being married. Two days after officially tying the knot, the newlyweds took to their respective Instagram accounts to offer a glimpse at their intimate nuptials.

The No Doubt frontwoman first shared the pictures on her social media page on Monday, July 5. One of the snaps saw the country music crooner hugging his new wife from the back while posing near what looks like the chapel in his estate with the sunset view in the background. He sweetly planted a kiss on her forehead.

For the wedding day, Gwen donned a white strapless dress with a solid top and tulle bottom designed by Vera Wang. She also wore a white veil and knee-high boots for an edgy touch. In another photo shared by her stylist, the names “Gwen, Blake, Kingston, Zuma, Apollo” could be seen sewn into her veil.

Another photo shared by the 51-year-old singer featured them driving off in a festive golf cart as Stefani appeared to throw her bouquet of flowers. The pair were also seen kissing in front of a multi-tiered cake in another snap.

In the caption of the pics, the “Hollaback Girl” hitmaker wrote, “July 3rd 2021 dreams do come true!!! @blakeshelton i love you,” while crediting the whole team that made it happen. Blake, meanwhile, reposted Gwen’s post with the same caption.

Gwen and Blake got married on Saturday, July 3 in a small and private ceremony at his Oklahoma ranch. They exchanged vows in a chapel which he built on the estate. According to Page Six, Gwen’s parents Dennis Stefani and Patty Flynn were among those in attendance at the nuptials.

Gwen and Blake began dating in 2015 after they met on the set of “The Voice“, where they both served as coaches. They announced their engagement in October 2020 after being holed up together for months amid the pandemic and after five years of dating.